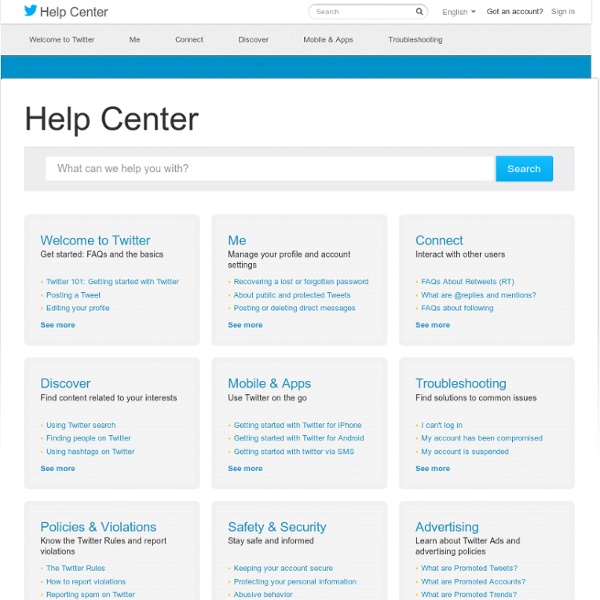 Cards Introduction With Twitter Cards, you can attach rich photos, videos and media experiences to Tweets, helping to drive traffic to your website. Simply add a few lines of markup to your webpage, and users who Tweet links to your content will have a “Card” added to the Tweet that’s visible to their followers. The Tweet embedded below shows a Player Card along with 140 characters: Drive engagement from your Tweets Announcing Site Streams Beta - Twitter API Announcements Site Streams, a new feature on the Streaming API, is now available forbeta testing. Site Streams allows services, such as web sites ormobile push services, to receive real-time updates for a large numberof users without any of the hassles of managing REST API rate limits.The initial version delivers events created by, or directed to, usersthat have shared their OAuth token with your application. Via Site Streams, the following events are streamed immediately andwithout rate limits: Direct Messages, Mentions, Follows, Favorites,Tweets, Retweets, Profile changes, and List changes. A subsequentversion is planned that will optionally deliver each user's hometimeline. For additional information on Site Streams and details on how to applyfor access, see the Site Streams Beta documentation

Twitter Statistics - In-depth Report by Sysomos on Twitter's Growth How much information do Twitters users disclose about themselves? In keeping with our efforts to offer insight to the fast-growing TwitterSphere, we decided it was time to see exactly how many details Twitter users are divulging. To put together our report, we examined over a billion tweets and compared to our 2009 study. Some highlights of our comparison of Twitter usage between 2009 and 2010 include: 5 Tips To Pass Twitter 101 It would make sense to assume that by now that the need for daily Twitter Tips is unnecessary; however that’s not the case. There are tons of people entering into the Twitterworld daily and even more who are failing Twitter 101. That’s part of the reason why my friends over at Twitter Tips, actress Alyssa Milano, my buddy Blair aka @Flipbooks and many others are so popular. You can check out this weeks article from The Huffington Post about Flipbooks here.

Share Bookmarklet Updated on Wed, 2014-02-12 17:33 Overview The Share Bookmarklet makes it easy for you to share any webpage on Twitter, even if there isn’t a Tweet Button. modifying rate limits under serious load - Twitter API Announcem hi everyone, as you all know, Twitter has been faced with considerable capacity problems in recent weeks. we have many efforts under way to expand capacity and more efficiently use the capacity we have. starting today, we're going to begin adjusting rate limits dynamically under load in order to maintain an awesome experience for as many users as possible. today, we're experimenting with moving rate limits for all clients to varying amounts during periods of high load. you might see rate limits change from the default of 350 calls / hour. you may even see different values as we monitor the effect these changes have on overall Twitter performance.

Jakob Nielsen Critiques Twitter By Rebecca Reisner Few would dispute that Twitter is the hottest social medium around. The microblogging application, which enables anyone with Internet access to issue short public messages—about where to buy the best red-velvet cupcakes or what the latest tally is on swine flu—has enjoyed stunning growth that has made Facebook and MySpace look like yesterday's children. An increasing number of CEOs are employing Twitter to communicate and bond with customers and employees. Nonetheless, it might be time to put some brakes on tweeting, according to Jakob Nielsen, a principal at Fremont (Calif.) How to stay safe on Twitter The Twitter "crimewave" reached a preliminary peak in October 2009, according to Barracuda Networks, which estimated that 12% of accounts created were eventually suspended as either malicious, suspicious or otherwise misused. In 2008, the equivalent "Twitter crime rate" averaged around 2%. Last week, sensibly, Twitter launched a new automatic link-screening service aimed at preventing phishing and other malicious attacks.

Tools and Resources - Better Business Brand This is a collection of the resources we use and the blogs we read. The resources are a mixture of free, freemium, and paid services. Along with the entries are short descriptions and personal experiences from Robert Hacala. Everything on this page we have either used ourselves or trust to be of great quality and value to you. Courses