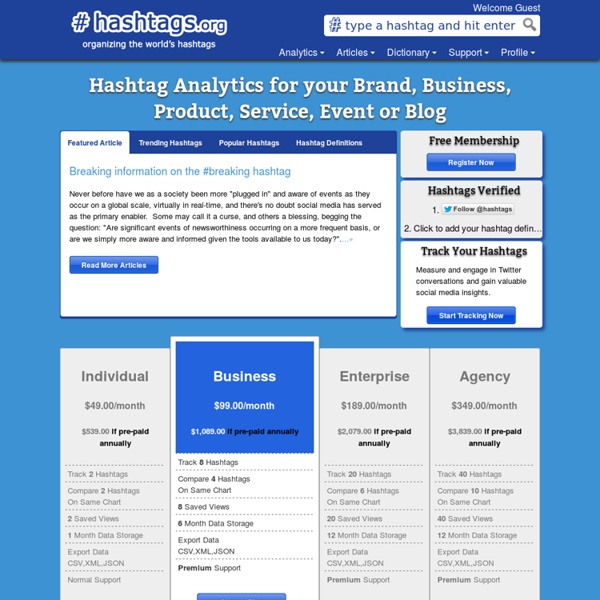 40 Advanced and Alternative Search Engines Have you ever been looking for something but didn’t know where to find it? If that something is online, then your search is over (or just about to begin). The following are 40 advanced and alternative search engines that you can use to find just about anything on the Internet. Use them to follow discussions about your industry, monitor your online reputation, and much more! General Search To start off our search adventure, let’s look at some general search engines beyond the top three.

The 2012 A-Z List Of Educational Twitter Hashtags We got so many additions and updates to our 2011 list we thought it was time to bring you the most up-to-date list for 2012. So, without further ado, here’s the 2012 A-Z list of educational Twitter hashtags. We went through all the comments on the 2011 version , wrote down all the Twitter and Facebook updates, and compiled this list over the course of several months. The Beginner's Guide to Twitter Update: This post was updated November 2013 to reflect current statistics and tools. Do you have a parent, friend or colleague ready to ditch his or her digital training wheels and head into Twitter's open wilderness? These pointers should get them started. And even Twitter experts might benefit from a quick refresher on the platform's valuable tools. First, the basics: What is Twitter all about? It's a platform wherein users share their thoughts, news, information and jokes in 140 characters of text or less.

30 Twitter Search Alternatives & Tools (Editors note: With the sad demise to Topsy on the 15th of December, we thought it a pretty good time to update our list of alternative tools for searching Twitter. The original was written back in April 2010 by Tad Chef, and sadly, it’s not just Topsy from our original list of 30 alternatives that has since disappeared or stopped being updated). Back in 2010, Twitter added a mechanic to it’s then creaky search mechanism that added the most popular tweets as well as the latest, but it’s fair to say it didn’t impress. So, we collated 30 of our favourite Twitter search tools as a handy reference. Now, Twitter has vastly improved it’s internal search tool in the proceeding five years, and also offers some basic analysis tools such as Twitter Analytics ( However, most digital marketers still make great use of third-party tools to make the most of searching Twitter.

How to Search Twitter – the Advanced Guide inShare24 You might be tired to see Twitter-related posts every single day but this shouldn’t prevent you from using the tool. To network using Twitter or not – is up to you. There are still many people who just don’t get the very idea of telling others what they are doing. What’s definitely should be taken into account: Twitter is a great marketing tool that can help you understand your audience and keep track of hot trends in your industry.

Ultimate Guide to Twitter Hashtags What is a Twitter hashtag? A hashtag is a way to unite global Tweets around some particular topic. Basically, these are tags that that help those who seek similar content discover your Tweets. Hashtags considered #harmful The noble hashtag is cursed by a problem Yogi Berra could appreciate: Too many people use it, so no one goes there. Presumably, most Twitter users use hashtags intending to add their tweet to a river of similar information and to expose their own thoughts to a wider, interested audience. Twitter itself markets the hashtag to those ends.

Best Tools to Summarize Twitter Hashtags Using Twitter for professional purposes has become common since the introduction of hashtags. Thanks to these modern marvels, it is easier than ever to draw traffic, catch the attention of a target audience, follow trends and manage reputation. For many bloggers, online business owners and marketing experts, it is becoming second nature. The easiest way to utilize Twitter to its greatest potential is through monitoring hashtags – which means getting a full summery of data that explains how they are being used. This is such a big part of applying Twitter as a professional tool today that endless programs have been created to help you do it. Whether it is seeing the analytics of a hashtag, or just finding out which ones are used most often, these ten tools will help you do it.

With 400 Million Tweets Per Day, Twitter Spending "Inordinate Resources" On Improving Content Discovery Twitter is devoting “an inordinate amount of resources and time” to improve content discovery for its users — a challenge that’s no doubt made more difficult by the service’s growing userbase and increased tweet activity. Twitter CEO Dick Costolo told a conference audience this week that Twitter is now seeing more than 400 million tweets per day, up from the 340 million figure that the company revealed in March. CNET reported Costolo’s comments from a conference put on by The Economist: Costolo was somewhat more forthcoming about mining the data trove it collects. “The fascinating thing about big numbers is you get macro trends and events, and incredible personal moments where you have to dive all the way to see things,” he said.

25 Free People Search Engines to Find Anyone I’ve been in this people search industry for over 3 years now and while researching, I found many free, high quality free people search engines to help you reconnect with friends, family, school friends or any other person from your past (or, in other words, find anyone for free online.) So I decided to put them in one huge list. Here they are: Free People Search – Check if the Person is Online 1. eVerify (great for searching people from the US)

The A-Z Dictionary of Educational Twitter Hashtags Whether you’re a new or seasoned Twitter user, you likely come across confusing hashtags that probably look like a bunch of nonsense. First, What’s A Hashtag? The # symbol, called a hashtag, is used to mark keyword or topic in a Tweet. The Technology Hidden Inside Every Tweet Illustration by David ParkinsBehind this week's cover Consider the tweet. It’s short—140 characters and done—but hardly simple.