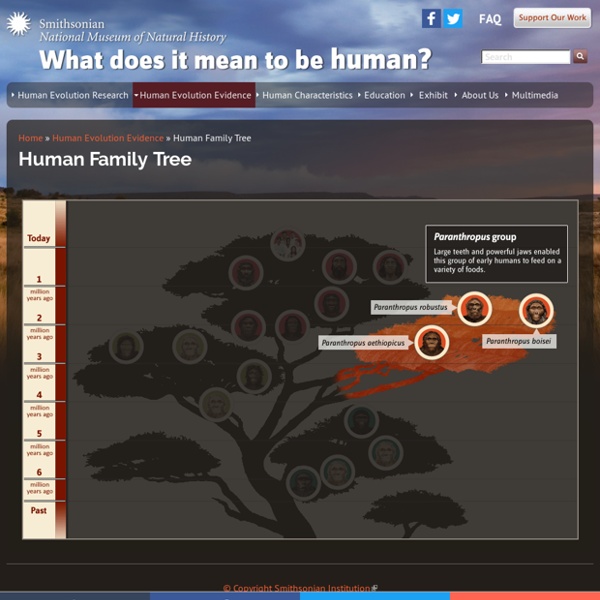 Homo erectus Homo erectus Where Lived: Northern, Eastern, and Southern Africa; Western Asia (Dmanisi, Republic of Georgia); East Asia (China and Indonesia) When Lived: Between about 1.89 million and 143,000 years ago The evolution of the human eye - Joshua Harvey The evolution of the human eye has long been regarded as a contentious issue. It was believed to be an example of irreducible complexity – that is something that could not have evolved, because any precursor to the fully evolved form would be non-functioning. Wikipedia gives a good overview of the concept. This lesson shows that not only do evolutionary precursors to the eye exist, but that there is a huge diversity in the structure and function of eyes in the animal kingdom. An ophthalmologist in America, Tim Root, has created a great video on the evolution of the eye, exploring it in more detail, with some great animation.

Teach Prehistory! Teaching a unit on Prehistory can be very exciting! The course begins with an overview of prehistoric conditions on earth until about 1,000 B.C. We are talking about millions and millions of years in one unit, so obviously you need to focus on the absolute most important aspects of the prehistoric period. Evolution: Education and Outreach - Free Access Available As of January 2013 Evolution: Education & Outreach is a peer-reviewed open access journal published under the brand SpringerOpen. From 2013 onward all new articles published in the journal are freely and permanently available online for anyone, anywhere and at any time. This journal promotes accurate understanding and comprehensive teaching of evolutionary theory for a wide audience. Evolution: Education and Outreach addresses the question of why we should care about evolution by exploring the practical applications of evolutionary principles in daily life and the impact of evolutionary theory on culture and society throughout history. Targeting K-16 students, teachers and scientists alike, the journal presents articles to aid members of these communities in the teaching of evolutionary theory.

Here's the tiny human twig in the Tree of Life Each Christmas, the BMJ (formerly the British Medical Journal) gets a little bit festive, releasing a special edition filled with goofy research papers. The science is real, but the topics are ridiculous. Last year, papers covered topics such as the origins of magic, how much James Bond really drank, and the physical responses to a public unicycler.

Early Human History Join our email newsletter to receive free updates! Close Search for Ideas and Resources An Error Occurred Setting Your User Cookie This site uses cookies to improve performance. If your browser does not accept cookies, you cannot view this site. Setting Your Browser to Accept Cookies This Face Changes the Human Story. But How? A trove of bones hidden deep within a South African cave represents a new species of human ancestor, scientists announced Thursday in the journal eLife. Homo naledi, as they call it, appears very primitive in some respects—it had a tiny brain, for instance, and apelike shoulders for climbing. But in other ways it looks remarkably like modern humans. When did it live?

5 ways to find out about sex in the wild Biologist Carin Bondar (TED Talk: The birds and the bees are just the beginning) studies how animals get down and dirty. The details are often bizarre but fascinating. “We hit topics hard, and not just for the quirk factor, but because there is a lot of cool science behind so many strange mating rituals,” she says of stories she tells with humor and aplomb. Below, she recommends five ways you can find out more about a topic you likely never knew you wanted to know about. All about the birds and bees. Literally