Photos of The Great War - Home 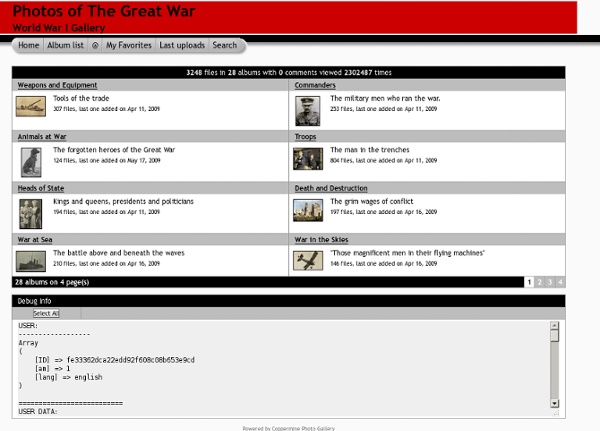 A Gothic Tour of Italy VISITORS to tend to seek its sunny, Dionysian side — vino, pasta, opera, cinquecento , George Clooney on a Vespa. But, like a chilly draft on a hot day, Italy’s gothic angle offers intimations of darkness that make a moment on the piazza even more delicious. Consciously or not, anyone sipping prosecco at sunset in Rome or Naples savors an extra spoon of dolce in their vita thanks to the contrast between the beauty of the present and the proximity of catacombs, ruins and sites of ancient suffering. The original gothic writers were much inspired by the duality in the bel paese. Edgar Allan Poe, Nathaniel Hawthorne, Horace Walpole, Ann Radcliffe and other masters of the romantic and horror genres set some of their most famous works in Italy. “Italy was the Gothic writers’ favorite background,” wrote Massimiliano Demata, a professor at the University of Bari, who has made a study of the form.

Aircraft Detection Before The Invention Of Radar Aircraft Detection Before Radar... I bet none of you ever saw this stuff before. How air attacks were detected before radar... Old time acoustic hearing aids You are the Fleet Admiral of the Navy in WWI what do you do? The Situation You’re the Fleet Admiral of the Navy in World War I. Your ships are being sunk at an alarming rate by the devastatingly effective German U-Boat. The ridiculous complexity of United Kingdom vs. Great Britain finally explained, by an American To Our Faithful Current.com Users: Current's run has ended after eight exciting years on air and online. The Current TV staff has appreciated your interest, support, participation and unflagging loyalty over the years. Your contributions helped make Current.com a vibrant place for discussing thousands of interesting stories, and your continued viewership motivated us to keep innovating and find new ways to reflect the voice of the people.

[2010] Germany Closes Book on World War I With Final Reparations Payment - SPIEGEL ONLINE - News - International Oct. 3, the 20th anniversary of German unification, will also mark the completion of the final chapter of World War I with the end of reparations payments 92 years after the country's defeat. The German government will pay the last instalment of interest on foreign bonds it issued in 1924 and 1930 to raise cash to fulfil the enormous reparations demands the victorious Allies made after World War I. The reparations bankrupted Germany in the 1920s and the fledgling Nazi party seized on the resulting public resentment against the terms of the Versailles Treaty.

1300-1400 Proto-Renaissance A comparison of Cimabue's Santa Trinita Madonna, c. 1280-90, with Giotto's Ognissanti Madonna, c. 1310—both in the Galleria degli Uffizi, Florence. Speakers: Dr. Beth Harris and Dr. Steven Zucker The Human BodyWe have bodies that exist in space, and this has been a fundamental challenge for artists through history. In ancient Greece and Rome, artists embraced the realities of the human body and the way that our bodies move in space (naturalism).

Untold Stories of the First World War Photos, letters and other memorabilia It was the war that tore Europe apart – a struggle between the central powers of Germany, Austria-Hungary, Turkey and Bulgaria, against the allied powers of Britain, France, Belgium, Russia, Italy and the USA. No European nation was left untouched – even neutral states felt the impact of the war. World War I (1914–1919): Overview World War I took place between 1914 and 1918. Although the conflict began in Europe, it ultimately involved countries as far away as the United States and Japan. At the time, the English-speaking world knew it as the “Great War”—the term “World War I” was applied decades later. Historians still actively disagree over the fundamental causes of the war. The period leading up to the war was a complex tangle of diplomacy and political maneuvering—many countries debated over strategies and alliances until nearly the last minute—and the first few weeks of the conflict were similarly chaotic and confusing.

Capitalism, Socialism & Communism: What They Are, Why They Don't Work, What Works Better What they are, why they don't work, and what works better Since the abandonment of communism by the former Soviet Union, the notion that capitalism is the only successful economic system has often been aggressively marketed in capitalistic media. The view is lent apparent credibility by the fact that communism largely failed in its aims, and was corrupt, grossly inefficient, and totalitarian. We believe, however, this thesis concerning the triumph of capitalism is for the most part confused, and to the exent that it isn't confused is actually quite false. The case is confused because the essential nature of each of these economic systems is almost universally misunderstood, and perhaps the most confused understanding of all concerns the nature of capitalism.

First World War internment camps a dark chapter in Canadian history Though the main battles of the First World War were fought across the ocean, back in Canada, there were prisoners and casualties of another kind. In 1914, immigrants from Austria-Hungary, Germany and the other Central Powers were rounded up and locked away in internment camps. More than 8,000 people who considered themselves Canadian were imprisoned for being “enemy aliens.” For many, it’s a dark secret.

Smarthistory: a multimedia web-book about art and art history Smarthistory offers more than 1500 videos and essays on art from around the world and across time. We are working with more than 200 art historians and some of the world's most important museums to make the best art history resource anywhere. Use the "subject" pulldown menu (go to "Arts and Humanities") at the top of this window or click on the headings below to access our content: Art history basics First things first (you are here) The materials and techniques artists use Art 1010