Debating the Origins of the Cold War: American and Russian Perspectives. The Revisionists and the Cold War – Still No Apology. WITH ALL OF THE REVELATIONS THAT HAVE SURFACED from the former Soviet archives, it has become irrefutable that the Soviet regime initiated, as well as prolonged, the Cold War. 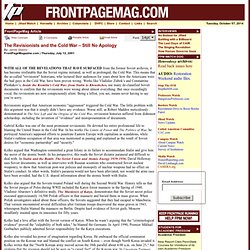 This means that the so-called "revisionist" historians, who lectured their audiences for years about how the Americans were the bad guys in the Cold War, have been proven wrong. Works like Vladislav Zubok’s and Constantine Pleshakov’s, Inside the Kremlin's Cold War: from Stalin to Khrushchev, use many de-classified Soviet documents to confirm that the revisionists were wrong about almost everything.

But once exceedingly vocal, the revisionists are now conspicuously silent. Being a leftist, you see, means never having to say you’re sorry. Revisionists argued that American economic "aggression" triggered the Cold War. Historiography of the Cold War. As soon as the term "Cold War" was popularized to refer to postwar tensions between the United States and the Soviet Union, interpreting the course and origins of the conflict became a source of heated controversy among historians, political scientists, and journalists.[1] In particular, historians have sharply disagreed as to who was responsible for the breakdown of Soviet-U.S. relations after the Second World War; and whether the conflict between the two superpowers was inevitable, or could have been avoided.[2] Historians have also disagreed on what exactly the Cold War was, what the sources of the conflict were, and how to disentangle patterns of action and reaction between the two sides.[3] While the explanations of the origins of the conflict in academic discussions are complex and diverse, several general schools of thought on the subject can be identified. 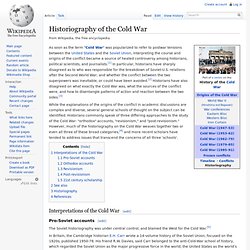 Interpretations of the Cold War[edit] Pro-Soviet accounts[edit] Everything you need to know about the military alliance that's freaking out Russia. The crisis in Ukraine is becoming an international crisis. 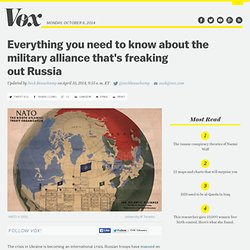 Russian troops have massed on the Ukrainian border, the US and European Union have sanctioned Russian officials, and the North Atlantic Treaty Organization (NATO) has suspended all "practical" civilian and military cooperation with Russia. If war were to break out between Russia and Ukraine, one of the big questions — in Washington, in Kyiv, and most especially in Moscow — is how NATO would respond. That NATO part of this is actually a pretty big deal: the Western military alliance is a big player in the Ukraine crisis and in Europe more broadly, so what it does matters.

In some ways, Russia's behavior toward Ukraine is partly driven by fear of NATO. But you might not know what, exactly, NATO is, how it works, and why it matters to so much. 1. America and Russia: Has the Cold War Really Ended? This article was first published in The Caucus, a political science and international development journal published by the University of Ottawa. 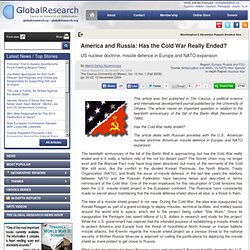 The article raises an important question in relation to the twentieth anniversary of the fall of the Berlin Wall (November 9, 1989): Has the Cold War really ended? The article deals with Russian anxieties with the U.S., American nuclear doctrine, American missile defence in Europe, and NATO expansion. NATO's Very Existence to Blame for Ukraine Violence, Ukrainian Pol Says. When the Berlin Wall fell, Russia emerged as the only loser. 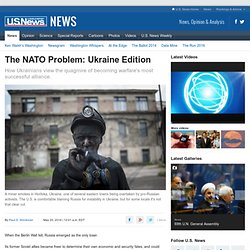 Its former Soviet allies became freer to determine their own economic and security fates, and could industrialize along Western standards largely as they pleased. America had its victory, and got to brag that the storylines glamorized in Hollywood hits like “Top Gun,” “Rocky IV” and “Red Dawn” could live up to their jingoism. And the North Atlantic Treaty Organization proved the alliance could weather the history that formed it, and endure into a new age. But an archway only works when both sides press against each other, so what good is a military alliance when it doesn't have a foe? In the two decades since NATO lost its longtime adversary, it has grown to include many former Soviet states.

Ukrainian presidential candidate Valeriy Konovalyuk on May 7 in Washington, D.C. The crisis in Crimea and eastern Ukraine began last fall, following reports the government dared to consider pro-Western accords. Kusturica: Why Does NATO Still Exist? To Fight Terrorism? It’s Laughable! Daniel 7:23 (New King James Version) 23 “Thus he said: ‘The fourth beast shall be A fourth kingdom on earth, Which shall be different from all other kingdoms, And shall devour the whole earth, Trample it and break it in pieces. 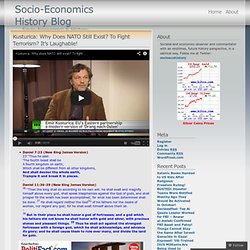 Click on image to goto article! US ‘defence’ (war really) budget is well over US$1T when all the discretionary spending are added ! It is over 50% of tax revenues! Discretionary spending in the FY 2013 budget was slashed to $1.264 trillion from $1.319 trillion budgeted in FY 2012. America is a WAR economy! NATO in the 21st Century. NATO is in crisis today. 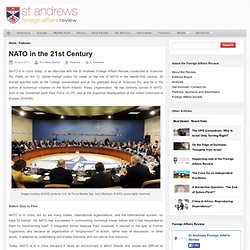 In an interview with the St Andrews Foreign Affairs Review conducted at Sciences Po, Paris, on Aril 12, Olivier Kempf states his views on the role of NATO in the twenty-first century. Dr Kempf teaches both at the College Universitaire and at the graduate level at Sciences Po, and he is the author of numerous volumes on the North Atlantic Treaty Organisation. He has formerly served in NATO, both in the Combined Joint Task Force (CJTF) and at the Supreme Headquarters of the Allied Command in Europe (SHAPE). Image courtesy of DOD photo by U.S. Air Force Master Sgt. Formation of NATO and Warsaw Pact - Cold War. 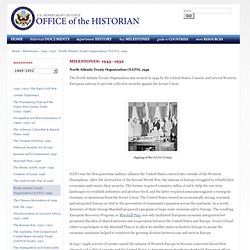 History. It is often said that the North Atlantic Treaty Organization was founded in response to the threat posed by the Soviet Union. 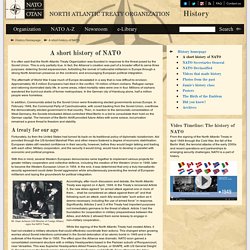 This is only partially true. In fact, the Alliance’s creation was part of a broader effort to serve three purposes: deterring Soviet expansionism, forbidding the revival of nationalist militarism in Europe through a strong North American presence on the continent, and encouraging European political integration. The aftermath of World War II saw much of Europe devastated in a way that is now difficult to envision. Approximately 36.5 million Europeans had died in the conflict, 19 million of them civilians. Cold War - Marshall Plan (1947-1952) The Marshall Plan Explained: US HIstory Review. Cold War - Comrades (1917-1945) Cold War - Iron Curtain (1945-1947) 5 March 1946. Although the term “Iron Curtain” was first used by Nazi Propaganda Minister Josef Goebbels early in 1945, it was popularized by Winston Churchill during an address he made in the United States in March 1946. 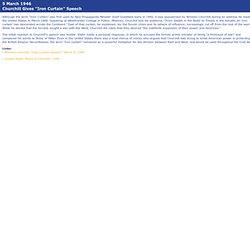 Speaking at Westminster College in Fulton, Missouri, Churchill told his audience, “From Stettin in the Baltic to Trieste in the Adriatic an ‘iron curtain’ has descended across the Continent.” East of that curtain, he explained, lay the Soviet Union and its sphere of influence, increasingly cut off from the rest of the world. While he denied that the Soviets sought a war with the West, Churchill did claim that they desired “the indefinite expansion of their power and doctrines.” The initial reaction to Churchill’s speech was hostile. Stalin made a personal response, in which he accused the former prime minister of being “a firebrand of war” and compared his words to those of Hitler.

Links: - Winston Churchill, “Iron Curtain Speech,” March 5, 1946. Interview to "Pravda" Correspondent Concerning Mr. Winston Churchill's Speech. J. V. Stalin March, 1946 Source: J. Warlords Ep4 Stalin VS Roosevelt. Publications. What is history? book review: In Defence of History. A further response to Richard J. Evans Throughout In Defence of History, Evans is eager to seem genial, pleading for mutual tolerance between literary and historical branches of study, and urging cease-fires in various long-fought battles. Perhaps this was an effort to make his critics appear surly, for as his rather peevish response to his reviewers shows, he is not quite as urbane as he wishes to seem.

Moreover, one of his chief complaints, and one with which I sympathise, is that his book has not provoked the kind of debate for which he hoped. So I think it justified to look more closely at the ideas he expounds in his attempt to defend history. The trouble is that laudable as this mission sounds, it is difficult to know where to begin or end it. Every page of the book yields ingots of both kinds, but we must begin somewhere. Well, yes, if his own book is anything to go by. (Diane Purkiss) Original review (by Prof. Professor Richard J Evans's response to his critics. The Beatles And The Cold War by on Prezi. GCSE Bitesize: Yalta and Potsdam - the basics.

g1cs1.qxd - cwar.pdf. - 63.pdf. THE COLD WAR - PART 1: From World War to Cold War. BSNTube Video Search Results For cold war. The Cold War. IB2-HistoryRevision - Cold War Historians. 1984 Video SparkNote. 1984: Themes, Motifs & Symbols. Themes Themes are the fundamental and often universal ideas explored in a literary work. History: Cold War. Who won World War II? The Nazi regime collapsed in May 1945, squeezed ever more tightly between two fronts - the Soviet Union on one side and the Western Allies on the other.

But which of these fronts was the most important? Throughout the Cold War, and ever since, each side has tended to see its own contribution as decisive. List of presidents of Russia. List of leaders of the Soviet Union. The New Cold War History. By John Lewis Gaddis Outside of a dog, a book is a man’s best friend. Inside of a dog, it’s too dark to read. -- Groucho Marx. Timeline - Cold War. Cold War Timeline. Origins of the Cold War: The Communist Dimension. History of Sir Winston Churchill. Winston Churchill was an inspirational statesman, writer, orator and leader who led Britain to victory in the Second World War. He served as Conservative Prime Minister twice - from 1940 to 1945 (before being defeated in the 1945 general election by the Labour leader Clement Attlee) and from 1951 to 1955.

Accessible Media Player by Nomensa The timeline slider below uses WAI ARIA. Please use the documentation for your screen reader to find out more. - 6-6.pdf. Articles, Interviews, Videos & Information. List of Prime Ministers of the United Kingdom. List of Presidents of the United States. Historiography of the Cold War. Why Was The Cold War Important. Cold War Historical Timeline.