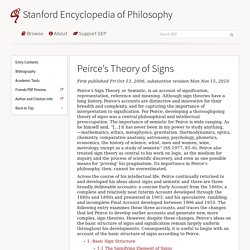 Basic Sign Structure In one of his many definitions of a sign, Peirce writes: I define a sign as anything which is so determined by something else, called its Object, and so determines an effect upon a person, which effect I call its interpretant, that the later is thereby mediately determined by the former. (EP2, 478) What we see here is Peirce's basic claim that signs consist of three inter-related parts: a sign, an object, and an interpretant. 1.1 The Signifying Element of Signs The very first thing to note is that there are some potential terminological difficulties here. Peirce's idea that a sign does not signify in all respects and has some particular signifying element is perhaps best made clear with an example. 1.2 The Object Just as with the sign, not every characteristic of the object is relevant to signification: only certain features of an object enable a sign to signify it. Icons, Symbols and a Semiotic Web.

Simple enough. What becomes difficult is defining what a ‘sign’ actually is. When we think of signs we think of the things on the left there don’t we? We think of something visual like a signpost. What this article isn’t about This article is not about semiotics. Starting at the beginning We’ve established that semiotics is the study of signs, and signs can be made up of all sorts of stuff like language, pictures, body language etc. but what does all this mean in a practical sense? Modern day Semioticians, not only study ‘signs’ - it goes much deeper than that - they study how meaning is formed. There are three main areas of semiotics; the signs themselves, the way they are organised into systems and the context in which they appear.

We’ll have a look at the first of these in this article. Peirce's Symbolic Iconic and Indexical Signs: Semiotics. Road signs are symbols with meaning. 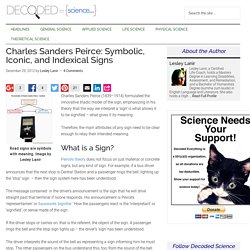 Image by Lesley Lanir Charles Sanders Peirce (1839–1914) formulated the innovative triadic model of the sign, emphasizing in his theory that the way we interpret a ‘sign’ is what allows it to be signified – what gives it its meaning. Therefore, the main attributes of any sign need to be clear enough to relay their intended meaning. What is a Sign? Peirce’s theory does not focus on just material or concrete signs, but any kind of sign. The message contained in the driver’s announcement is the sign that he will drive straight past that terminal if noone responds.

If the driver stops or carries on, that is the referent, the object of the sign. The driver interprets the sound of the bell as representing a sign informing him he must stop. Peirce’s Three Sign Modes We are surrounded by an infinite number of signs. He proposed that signs could be classified according to the qualities, facts, laws and conventions associated with the objects.

Icon or Iconic Sign. Semiotic elements and classes of signs. Peirce conceives of and discusses things like representations, interpretations, and assertions broadly and in terms of philosophical logic, rather than in terms of psychology, linguistics, or social studies. 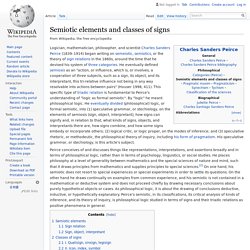 On the other hand he draws continually on examples from common experience, and his semiotic is not contained in a mathematical or deductive system and does not proceed chiefly by drawing necessary conclusions about purely hypothetical objects or cases. As philosophical logic, it is about the drawing of conclusions deductive, inductive, or hypothetically explanatory. Semiotic elements[edit] Thought is not necessarily connected with a brain. Sign relation[edit] Approaches to Applied Semiotics [AAS] -< P E I R C E >-