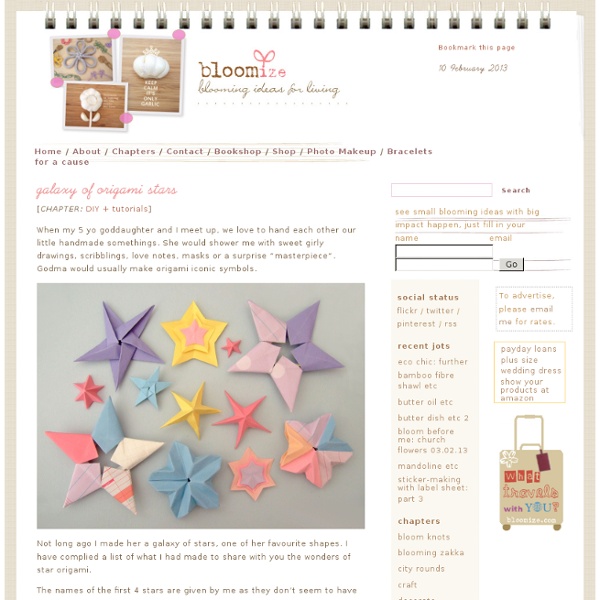 When my 5 yo goddaughter and I meet up, we love to hand each other our little handmade somethings. She would shower me with sweet girly drawings, scribblings, love notes, masks or a surprise “masterpiece”. Godma would usually make origami iconic symbols. Not long ago I made her a galaxy of stars, one of her favourite shapes. I have complied a list of what I had made to share with you the wonders of star origami. The names of the first 4 stars are given by me as they don’t seem to have formal titles, so I took the liberty to describe them according to what they represent to me, hence they are by no means official. 1. I like that you get 2 stars from this miraculous modular construct by Trang Chung. 1. 2. Taking a cue from Craft Ideas, I 3D-ize a cutout star like this: 1. Notes: Will need a slim tool (e.g. needle, toothpick) to prop up the triangles while gluing. 3. I like this star by Tomoko Fuse on Extreme Cards. A 5 point pentagon-shaped paper is required to make this. 4. [p.s.

Video on How to Make a Kusudama With the Carambola Flower by Carmen Sprung This Kusudama can be considered modular origami, and it is based on a beautiful flower model, folded from a pentagon and originally created by Carmen Sprung (Germany). She calls it “carambola” perhaps because of its resemblance to a cross section of a carambola –also known as star fruit. On her website, Happy Folding, Sara Adams (Germany) presents a video showing how to make a pentagon and how to fold the origami carambola. The folding process, as Sara demonstrates, is both easy and pleasing. The Kusudama structure is that of a dodecahedron and made with twelve pentagonal flowers. It can be used as a holiday decoration or given as given as a handmade Christmas gift. Extra Tips to Make the Carambola and Kusudama: When folding the paper to make the pentagons, use the first piece of paper folded (picture 1) as a template by placing each of the other pieces above it and then folding (pictures 2 and 3). The paper used was “Tant” and the color I applied to this paper was oil pastel.

Folding Trees Creative Kismet » Blog Archive » little guiding stars Since the new year has started I’ve been trying to think of ways to be more kind to my self. Especially when that nasty gremlins try to creep in and stump me. I remembered this origami star video on You Tube and had to get them involved in my plan. I thought it would be fun to make a whole bunch with kind words and “you are….” phrases inside. I used 12 x 12 inch scrapbook paper and cut 1/2 x 12″ strips, then followed the video HERE*. *UPDATE! Be Sociable, Share!

Carambola Flowers by Carmen Sprung If you’ve been following me on Flickr for a while, you’ve probably seen this picture of Carambola Flowers before – I folded them ages ago! But since my Pro account is going to expire in a few days time (and I don’t feel like upgrading it again), a lot of my old photos won’t be displayed anymore. So I decided it would be a good idea to share the very best of them on my blog! These absolutely beautiful origami flowers were designed by Carmen Sprung and I just love them! Description Video tutorial presented by Sara Adams of HappyFolding.com. Tags: Carmen Sprung, Floral Paper Models of Polyhedra Kusudama Tutorial part 2 Today I am showing you part 2 of how to make a kusudama ball. You can find the first part here. In part 1, I showed you have to make the individual flowers; you should now have 12 flowers made from 60 individual petals. For part 2 you will need: 12 flowers (made from 60 petals)GlueString or a ribbonBead(s) As you might be able to see from the finished kusudama at the top of the page, I made 6 flowers from blue paper and 6 flowers from a recycled map. Start to glue the flowers together one petal at the time – this will give the nicest result. When you add the 3rd flower, there are 3 petals to connect. After you have attached all 6 flowers you end up with 2 sets of half a kusudama. I used 3 beads on the bottom. Now take one of your 1/2 kusudamas and put some glue on the top. Glue your string down, making sure it is nice and straight. That’s it! In the last photo you can see another kusudama I finished earlier. If you are having a go with this 2 part tutorial we would love to see your work!

Make This: A Luminous Faceted Pendant Light » Curbly | DIY Design Community « Keywords: DIY, pendant, lighting, paper Remember those folded up fortune-tellers from your elementary school days? Some kids called them cootie-catchers, but I never really understood the method behind the madness with that one. But I digress, because paper folding prowess was not in vain. Take a longing glance at this beautiful DIY faceted pendant sphere, completely covered in small fortune tellers! Tagged : pendant, lighting, paper, DIY

Paper Flowers – Anyone Can Do That | FindInspirations.com Japanese Kusudama, this tutorial is featured on Craftuts Anyone can do that, I assure you. The proof: I can, just take a quick look at my result below. And, believe me, I am neither meticulous nor particularly patient. You could even say I’m the opposite. Below you can see my very first attempt to create paper flowers. What you will need to make your own Kusudama paper ball? 1. 3. 4. (optionally) I prefer torn paper instead of cut. You have to start with a single petal. Now you have to glue your 5 petals into a flower. Apply the glue to only one side of each petal, except for the last one, in this case cover both sides with glue. Your first flower is done. Don’t glue every petal right after you make it. When all 12 flowers are finished you have to glue them together. When two halves of Kusudama Flower Ball are ready you have to glue them together.

kusudama (glued) | paper unlimited | Page 2 As mentioned before this beautiful kusudama has Fuse has it’s author. It’s made from six 15 cm square paper and eight 7.5 cm square paper. Very easy to fold and easy to assemble; the model requires some glue/ double scotch tape to hold firmly when assembled. I translated the tassel diagram however I choose to do this variation with beads. Price of the kit is around 4 to 5€, but it can be more expensive, depends on who and where you buy it… The kusudama has a diameter of almost 11 cm. Kusudama Tutorial part 1 The Japanese kusudama is a paper ball made out of multiple identical origami shapes glued together. They were traditionally used as a ball for incense or potpourri but now we see them more for decoration or as a gift. Today I am showing you part 1 on how to make the Japanese traditional shape. There are many different patterns to make a kusudama ball but I find this the easiest pattern to get started. What you need for this tutorial is: 60 pieces of paper cut into squares. Below I will show you how to make the basic shape, you need to make 60 of these. Fold the bottom corner to the top. Fold the left and right corners up to the middle corner. Fold the same points down. Open up the flaps you have just created and flatten them. Fold the top triangles towards you so they are level with the edges of the paper. Fold the triangles back using the crease you made earlier and glue the outside triangles together. Now make 5 more of these petals and glue them all together.