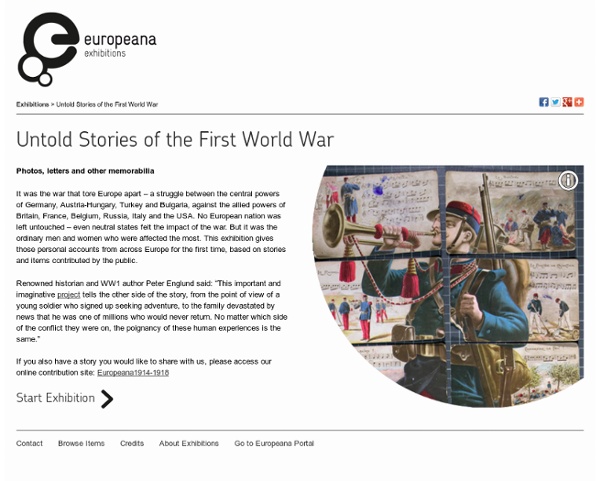 Photos, letters and other memorabilia It was the war that tore Europe apart – a struggle between the central powers of Germany, Austria-Hungary, Turkey and Bulgaria, against the allied powers of Britain, France, Belgium, Russia, Italy and the USA. No European nation was left untouched – even neutral states felt the impact of the war. But it was the ordinary men and women who were affected the most. This exhibition gives those personal accounts from across Europe for the first time, based on stories and items contributed by the public. Renowned historian and WW1 author Peter Englund said: “This important and imaginative project tells the other side of the story, from the point of view of a young soldier who signed up seeking adventure, to the family devastated by news that he was one of millions who would never return.

World War I (1914–1919): Overview World War I took place between 1914 and 1918. Although the conflict began in Europe, it ultimately involved countries as far away as the United States and Japan. At the time, the English-speaking world knew it as the “Great War”—the term “World War I” was applied decades later. Historians still actively disagree over the fundamental causes of the war. The period leading up to the war was a complex tangle of diplomacy and political maneuvering—many countries debated over strategies and alliances until nearly the last minute—and the first few weeks of the conflict were similarly chaotic and confusing. However, historians agree nearly unanimously about the war’s consequences: World War I led almost directly to World War II and set the stage for many other important events in the twentieth century.

How Our Higher-Selves Work Understanding the nature of our Higher-Selves (aka Oversouls) is essential to living a whole and fulfilling Spiritual life. Each one of us have a higher-self and by being in contact with it, we reach new heights of consciousness. Here’s a detailed explanation of How Our Higher-Selves Work… We are all branches, extensions and nodes of Oneness. We live in a holographic reality of various level of spheres vibrating, reverberating and communicating at various levels of existence. Imagine as though God or Source is the trunk of a great tree.

The Study Of Spirit: The Merkabah Even extra-dimensional superbeings need to get around, and while a Prius may be environmentally sound it can hardly be considered a safe vessel for traversing the universe’s many pitfalls and dangers. The void, dark creatures and interdimensional travel can negatively affect the consciousness of any being, and since it is necessary to travel on a celestial or astral plane once in a while we should probably invest some time on the vehicle which, according to mythology, we should all be driving. I’m talking of course about the Merkabah.

200+ Consciousness Raising Documentaries Do you feel like having a ‘Movie Night’ without having to go anywhere? Here is a list of over 200 consciousness expanding movies and documentaries that will assist you in your evolution – All of which can watched for free online in the links below. How many of them have you seen? Enjoy! Leave a comment below if there are any other videos that you would like to recommend! Also, if there are any broken links, please let us know as well!

Why Awaken Kundalini? Everybody should know something about kundalini as it represents the coming consciousness of mankind. Kundalini is the name of a sleeping dormant potential force in the human organism and it is situated at the root of the spinal column. In the masculine body it is in the perineum, between the urinary and excretory organs. The Indigo Evolution – Full Length Documentary Are Indigo Children only a fanciful notion of a few individuals, or is there real evidence that they truly do exist? And perhaps more importantly, what is the purpose of these children, what are they here to create? Are you an Indigo?

The Tao Te Ching Explained In Depth The Tao Te Ching, also known as the Dao De Jing, is an ancient attempt to point us toward our true nature written by the Chinese Sage, Lao Tzu, in 6th century B.C. Dao De Jing is best translated as "the Way and it's Power". The Dao cannot be revealed or explained adequately in words and yet this beautiful poem was made in an attempt to do so. The Dao along with the Zhuangzi, is a fundamental text for both religious and philosophical Daoism. Many Chinese artists, poets, painters, calligraphers and even gardeners have used the writings as a source of inspiration. The text itself is short, containing only around 5,000 Chinese characters within 81 brief chapters or sections.

38 Awesome Crystals for Spiritual Growth Crystals have always been rather appealing to me. There is something special about what they are, what they represent. They are more concentrated than regular rocks, they have more crystalline geometric patterns in their atomic structure than the cells in the human body do (sure, it may not be as fluid and moving, but that’s yin and yang for you) On my journey, I came across an old dusty book about crystals with a little piece of paper slipped inside. First World War internment camps a dark chapter in Canadian history Though the main battles of the First World War were fought across the ocean, back in Canada, there were prisoners and casualties of another kind. In 1914, immigrants from Austria-Hungary, Germany and the other Central Powers were rounded up and locked away in internment camps. More than 8,000 people who considered themselves Canadian were imprisoned for being “enemy aliens.” For many, it’s a dark secret. It wasn’t until Jerry Bayrak was in his 70s that he first learned of his family’s past.

Can DMT Connect The Human Brain To A Parallel Universe? Dr. Rick Strassman in his book DMT: the Spirit Molecule, claims that DMT, which is one of the most powerful psychedelic drugs, can provide a reliable and regular access to the other planes of existence. He claims that DMT may actually be a gateway to parallel universes. In fact, these universes are always there and constantly transmit information. But we cannot perceive them because we are simply not designed for this: our ‘program’ keeps us tuned to the standard, mentally ‘normal’ channel. We don’t have the sensory tools available to tune into to this information. Character and Characterisation in the Novel Our Quick Guide to writing convincing characters Building Character Characterisation - the task of building characters - isn't easy. But if you're struggling to build characters with real life and vigour, here is our very own patented technique.

BBC Schools - Life in the trenches 31 October 2014Last updated at 15:07 Two British soldiers standing in a flooded communication trench during World War One On the Western Front, the war was fought in trenches. Trenches were long, narrow ditches dug into the ground where soldiers lived all day and night. There were many lines of German trenches on one side and many lines of Allied trenches on the other.