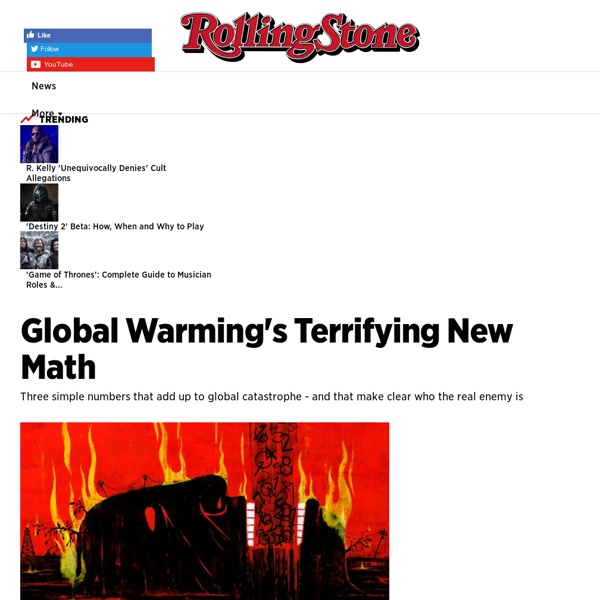 If the pictures of those towering wildfires in Colorado haven't convinced you, or the size of your AC bill this summer, here are some hard numbers about climate change: June broke or tied 3,215 high-temperature records across the United States. That followed the warmest May on record for the Northern Hemisphere – the 327th consecutive month in which the temperature of the entire globe exceeded the 20th-century average, the odds of which occurring by simple chance were 3.7 x 10-99, a number considerably larger than the number of stars in the universe. Meteorologists reported that this spring was the warmest ever recorded for our nation – in fact, it crushed the old record by so much that it represented the "largest temperature departure from average of any season on record." The same week, Saudi authorities reported that it had rained in Mecca despite a temperature of 109 degrees, the hottest downpour in the planet's history. Not that our leaders seemed to notice.

A Ray of Hope on Climate Change YOU don’t have to be a climate scientist these days to know that the climate has problems. You just have to step outside. The United States is now enduring its warmest year on record, and the 13 warmest years for the entire planet have all occurred since 1998, according to data that stretches back to 1880. No one day’s weather can be tied to global warming, of course, but more than a decade’s worth of changing weather surely can be, scientists say. Meanwhile, the country often seems to be moving further away from doing something about climate change, with the issue having all but fallen out of the national debate. Behind the scenes, however, a somewhat different story is starting to emerge — one that offers reason for optimism to anyone worried about the planet.

Trying to follow what is going on in Syria and why? This comic will get you there in 5 minutes. That warning has become a global alert. Since the uprising against Assad in March 2011, over 240,000 people have been killed, 4 million Syrians have fled their country, and over 7 million have been displaced. The headlines are full of the heartbreaking stories of these refugees — including young children — who have died trying to reach safety in other countries. The story of these refugees is deeply tied to the effects of climate change. "We are experiencing a surprising uptick in global insecurity ... partially due to our inability to manage climate stress."

Watch 131 Years of Global Warming in 26 Seconds Don't Have Flash? Watch this video on your iPad or iPhone here While temperatures soared for many this summer, this video takes the longer historical view. It comes to us from our friends at NASA and is an amazing 26-second animation depicting how temperatures around the globe have warmed since 1880. That year is what scientists call the beginning of the “modern record.”

3. Mission, vision, values and guiding principles The first step is to establish the common ground. We start with a restatement of UCL’s mission. We then set out a statement of vision for the institution, and then a set of guiding principles. On these foundations are built nine key strategic aims, each of which is then developed in the following sections. The mission

64% of US Now in Drought, Yet Most States Don't Consider Climate Change's Effect on Water Al Jazeera English/CC BY-SA 2.0 And it gets drier... The US Department of Agriculture has declared half of all US counties disaster areas due to the expanding drought, adding 200 counties across 12 states to those experiencing drought conditions. Thirty five states now have drought conditions, with 64% of the nation in moderate or severe drought U.K. to mandate CO2 reporting for largest corporations The U.K. government today confirmed that it will introduce mandatory carbon reporting rules requiring around 1,800 of the country's largest listed companies to report annually on their greenhouse gas emissions. In The Guardian, deputy prime minister Nick Clegg, who will tomorrow represent the U.K. at the Rio +20 Earth Summit in Brazil, wrote that long-awaited emission reporting rules would come into effect next April. "Using resources responsibly is in business's own interests too," he wrote. "Pepsi depends on water, Unilever depends on fish stocks and agricultural land, and every firm relies on a stable fuel supply. But while nine out of 10 chief executives say sustainability is fundamental to their success, only two out of 10 record the resources they consume. "So the U.K. will press for governments to come together, working with those companies already blazing a trail, to give 'sustainability reporting' a global push.

People & Planet's Fossil Free campaign Follow @fossilfree_UK on Twitter and facebook: Join the Fossil-Free campaign To receive updates on this new campaign and be involved from the start, join our mailing list What is the People & Planet network calling for? Carbon bubble According to the UK MP Committee overvaluing companies that produce fossil fuels and greenhouse gases poses a serious threat to the economy. The UK MPs Committee warned British government and Bank of England of the risks of the carbon bubble in 2014.[1] Value[edit] NASA scientist links climate change, extreme weather James Hansen argues that rising global temperatures are fueling an increase in extreme weatherHe cites a 2010 heat wave in Russia and last year's Texas drought as examplesHansen, an activist, directs research at the NASA Goddard Institute for Space Studies (CNN) -- What do the 2010 heat wave in Russia, last year's Texas drought, and the 2003 heat wave in Europe have in common? All are examples of extreme weather caused by climate change, according to a new study from NASA scientist James Hansen. "This is not a climate model or a prediction but actual observations of weather events and temperatures that have happened," he wrote in a Washington Post opinion piece meant to accompany the study.

Global Warming: An Exclusive Look at James Hansen’s Scary New Math How can NASA physicist and climatologist James E. Hansen, writing in the New York Times today, “say with high confidence” that recent heat waves in Texas and Russia “were not natural events” but actually “caused by human-induced climate change”? It wasn’t all that long ago that respected MIT atmospheric scientist Kerry Emanuel flatly refuted the notion that you can pinpoint global warming as the cause of an extreme weather event. “It’s statistical nonsense,” he told PBS. In 2005, Emanuel reported that hurricane intensity, which is fed by warmth, had increased some 80 percent during the previous 50 years, a period during which temperatures had increased more dramatically than any time in at least 500 years. Finance of the future: how a more ethical financial system beckons Costas Lapavitsas, professor in economics at SOAS, speaking at the Transforming Finance conference Photo © Peter Schiazza When the Occupy movement rose up after the financial crisis, protesters were criticised for not having solid ideas of what they wanted. But now, those who are seeking a better, more genuine and sustainable economy for people and planet have a clearer idea of what is needed.