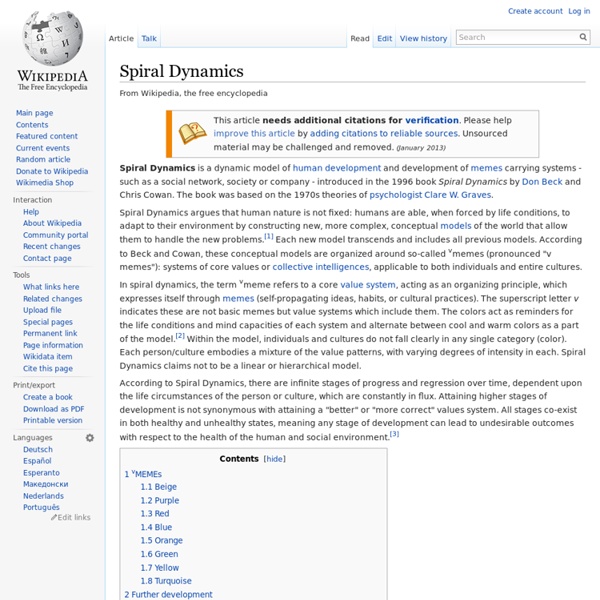 In spiral dynamics, the term vmeme refers to a core value system, acting as an organizing principle, which expresses itself through memes (self-propagating ideas, habits, or cultural practices). The superscript letter v indicates these are not basic memes but value systems which include them. The colors act as reminders for the life conditions and mind capacities of each system and alternate between cool and warm colors as a part of the model.[2] Within the model, individuals and cultures do not fall clearly in any single category (color). Each person/culture embodies a mixture of the value patterns, with varying degrees of intensity in each. Spiral Dynamics claims not to be a linear or hierarchical model. According to Spiral Dynamics, there are infinite stages of progress and regression over time, dependent upon the life circumstances of the person or culture, which are constantly in flux. vMEMEs[edit] THE FIRST TIER VALUE SYSTEMS; The Levels of Subsistence[5] Beige[edit] Purple[edit]

Center for Psychological Development Transpersonalism: Ego Meets Soul by James E. Strohl, Ed.D.Journal of Counseling & Development, Fall 1998, Vol. 76, pp. 397-403. Over the last few decades, the transpersonal approach has emerged from mainstream psychology to address the effects of spirituality and consciousness on personal transformation and health and to explore the optimal levels of human functioning. Despite its increasing popularity, many mental health professionals lack basic knowledge of the transpersonal approach. For more than 25 years, increasing numbers of mental health practitioners have been using a therapeutic approach associated with a school of psychology known as transpersonal psychology. The term transpersonal means beyond (trans) the personal, ego or self. Transpersonal psychology Is concerned with the study of humanity’s highest potential, and with the recognition, understanding, and realization of unitive, spiritual, and transcendent states of consciousness.

Video of Dr. Russell Ackoff Discussing Systems and Pieces On weekends, I like to share videos or fun stuff that gets us thinking. Today, I’m sharing a video with the legendary Dr. Russell Ackoff where he’s speaking at a session moderated by Clare Crawford-Mason, the producer of the outstanding video Good News…How Hospitals Heal Themselves on Lean and systems thinking. Ackoff makes important points in the video, but he starts with one of the funnier (and unexpected) speaker openings I’ve seen: Since Ackoff was speaking at the end of a list of distinguished speakers, he said: “I feel like a pornographic movie that’s being shown to people who just engaged in sex… in short, anti-climax.” Here is the video: Some of the notes I took while watching (I’ll leave them unedited): Failures in improvement programs – comes from not making systemic improvements. If a system is taken apart, it loses its inherent properties. If you take the parts separately, the system as a whole will not be improved. Continuous improvement or dis-continuous improvement?

Lifestreams - the interconnecting Transpersonal consciousness web of all life Seen and unseen Streams of Consciousness which create the relationships we experience allow information to flow from one to other. They are the Essence of Love which gives meaning and purpose to the Mirror that Life presents to us in our individual lives. The Web of Life is continually moving, changing shape, dimension, expanding and contracting, experiencing of itself through the collective experience. You cannot separate yourself from this collective experience. Every individual experience, response and reaction moves through the whole "web of all life" .. even the ones that are denied, repressed, hidden under codes of secrecy and silence. These become part of both the collective and our own personal experience - influencing the behavior (and the evolution) of the whole .. and all of its parts: the individual "you and I". Some of these Consciousness Streams we may be aware of. For those who are familiar with the term, this is, in part the principle of the hologram - but a whole lot more.

Joseph M. Juran Early life[edit] Juran was born in Brăila, Romania, one of the six children born to a Jewish couple, Jakob and Gitel Juran; they later lived in Gura Humorului. He had three sisters: Rebecca (nicknamed Betty), Minerva, who earned a doctoral degree and had a career in education, and Charlotte. He had two brothers: Nathan H. Juran and Rudolph, known as Rudy. Rudy founded a municipal bond company[2] In 1912, he emigrated to America with his family, settling in Minneapolis, Minnesota. Personal life[edit] In 1926, he married Sadie Shapiro. Joseph and Sadie raised four children (3 sons and 1 daughter.) Department Chief[edit] Juran was promoted to department chief in 1928, and the following year became a division chief. As a hedge against the uncertainties of the Great Depression, he enrolled in Loyola University Chicago School of Law in 1931. During the Second World War, through an arrangement with his employer, Juran served in the Lend-Lease Administration and Foreign Economic Administration.

transpersonal and its nature: a plain man's Transpersonal Psychology journals Russell L. Ackoff Russell Lincoln Ackoff (/ˈækɒf/; 12 February 1919 – 29 October 2009) was an American organizational theorist, consultant, and Anheuser-Busch Professor Emeritus of Management Science at the Wharton School, University of Pennsylvania. Ackoff was a pioneer in the field of operations research, systems thinking and management science. Biography[edit] Russell L. From 1947 to 1951 Ackoff was assistant professor in philosophy and mathematics at the Wayne State University. Nicholson and Myers (1998) report that, in the 1970s and 1980s, the Social Systems Sciences Program at the Wharton School was "noted for combining theory and practice, escaping disciplinary bounds, and driving students toward independent thought and action. From 1986 to 2009, Ackoff was professor emeritus of the Wharton School, and chairman of Interact, the Institute for Interactive Management. Ackoff was awarded an honorary Doctor of Science at the University of Lancaster, UK in 1967. Russell L. Work[edit] f-Laws[edit] Podcast: