80+ Google Forms for the Classroom – Tom Barrett's Blog. If you're new here, you may want to subscribe to my weekly newsletter. 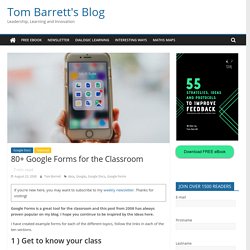 Thanks for visiting! Google Forms is a great tool for the classroom and this post from 2008 has always proven popular on my blog. I hope you continue to be inspired by the ideas here. I have created example forms for each of the different topics, follow the links in each of the ten sections. 1 ) Get to know your class Use this form to gather some indication from your new class about their likes and dislikes, their favourite lessons or after school clubs they enjoy. 2 ) Emotion graph An emotion graph is a simple line graph comparing a range of happiness to sadness against different points (time) in a story or film. Use a Google Form to gather the children’s responses to different parts of any type of linear narrative, written or visual. 3 ) Spelling test Steve Kirkpatrick had this brainwave a while back so check out his excellent post for more information about setting up the spreadsheet. 4 ) Comprehension questions.

#DrowningInPaperwork - Soaring. Heading back to school can be completely overwhelming. 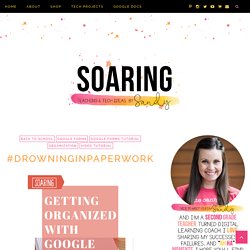 With everything that is expected of teachers- PD, meetings, setting up a classroom, meetings, PD, getting ready for your new class, meetings, meetings, and more meetings.... It's incredible we even make it through the month of September. Usually for me, the paperwork can be the most headache inducing part of Back to School season! 25 Ways to use Google Forms in the Classroom (with examples!) But here's the deal - most teachers aren't taking full advantage of what Google Forms has to offer! 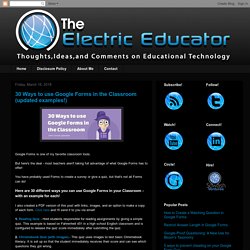 You have probably used Forms to create a survey or give a quiz, but that's not all Forms can do! Here are 25 different ways you can use Google Forms in your Classroom - with an example for each! I also created a PDF version of this post with links, images, and an option to make a copy of each form. Click here and I'll send it to you via email! 1. 2. 3. 4. 5. 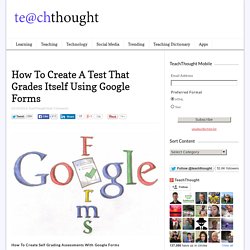 It’s not especially elegant, it won’t wow students, and the learning curve isn’t as mild as it might be. But with a little bit of work on the front-end, Google Forms can return the favor in spades on the back-end in the form of self-grading assessments. While there isn’t an app (yet) that can uncover the true nuance of understanding, if you’re using multiple-choice assessments–even just as pre and summative assessments–this trick can save you time, allowing the real potential of assessment to shine through in consistently extracting data to revise planned instruction. Utilizing Google Forms for Formative Assessment - NYNJGS13. 8 Google Forms Formative Assessment Tips. If you use Google Forms for formative assessment quizzes here are some tips for managing the resulting spreadsheet. 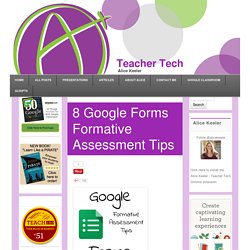 When organizing data it is important that your data match. Trying to sort data by student name can be sketchy when students type in their own name. They might use “Robert” one day and “Bob” another. They may simply misspell their name. While I do not need the students ID number it is harder for students to get creative in how they fill it out. Rather than ask for “name” make 2 questions. Google Forms. 20 practical ways to use Google Forms in class, school. Google Forms gives educators a powerful data collection tool. 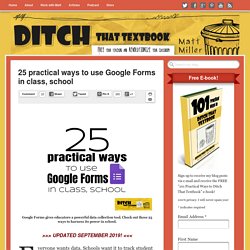 Check out these 25 ways to harness its power in school. Everyone wants data. Schools want it to track student performance. Companies want it to learn about their customers. We track data in our own personal lives (fitness data, banking data, even social media data). Teachers and students have their own data gathering and tracking tool that’s free and easy to learn — Google Forms. 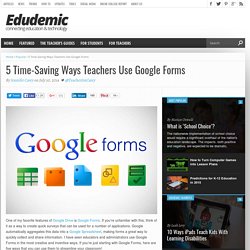 If you’re unfamiliar with this, think of it as a way to create quick surveys that can be used for a number of applications. Google automatically aggregates this data into a Google Spreadsheet, making forms a great way to quickly collect and share information. I have seen educators and administrators use Google Forms in the most creative and inventive ways.

If you’re just starting with Google Forms, here are five ways that you can use them to streamline your classroom! Collect Contact Information At the beginning of the year, I find that a great ice-breaker with my students is to share a Google Form that asks their name, contact information, and something unique and interesting about themselves. Similarly, it is often necessary to collect information from parents for special events. Bell Ringer & Exit Ticket Activities Collect Homework Collecting homework is often an onerous task. 7 Excelentes Google Forms para profesores. Desde su lanzamiento hace unos meses, la tienda de complementos para Google Forms tiene varias herramientas interesantes que han sido añadidas a la misma. 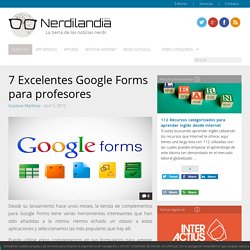 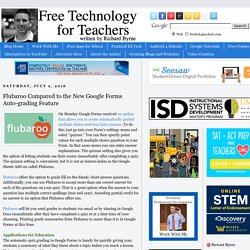 To do this just go into your Form's settings menu and select "quizzes. " You can then specify point values for each multiple choice question in your Form. In that same menu you can enter answer explanations. The quizzes setting also gives you the option of letting students see their scores immediately after completing a quiz.

The quizzes setting is convenient, but it is not as feature-laden as the Google Sheets Add-on called Flubaroo. Flubaroo offers the option to grade fill-in-the-blank/ short answer questions. Flubaroo will let you send grades to students via email or by sharing in Google Docs immediately after they have completed a quiz or at a later time of your choosing. Google Forms Refresh - Very Refresh! We believe that Google’s mission statement somehow involves making us at Dotto Tech happy. 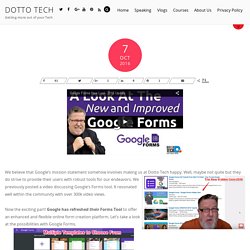 How to Accept Multiple Correct Responses on Google Forms Quizzes. How to Create a Simple Check Out / Check In System in Google Forms. Mari Venturino Blog: Using Google Forms for Walkthrough Observations. As many of you know, I have a major obsession with Google Forms. Last school year in a Faculty Advisory Committee meeting, we were discussing our district’s walkthrough evaluation form, and how it did not adequately address our school’s focuses and goals. Once I realized I could customize a Google Form and use Autocrat to generate personalized walkthrough evaluations for teachers, I literally started bouncing in my chair.

(One of my colleagues lovingly calls this “Tiggering” because I get bouncy when I’m excited!) I began a semester-long project creating the walkthrough Form, iterating on it, and troubleshooting technical problems. I personally love it when my principal and assistant principals come through for walkthrough observations. Often, our administrators sit down at an open student desk, interact with students, and ask students about what they are learning. Once admin leaves my classroom, I receive an email with their observations and suggestions. PD Webinar - Google Forms & Sheets for Beginners. Google Forms and Sheets can complete all kinds of tasks for you, if you know how to use them. Once you’ve learned the basics of Google Forms and Google Sheets you will be amazed at how these powerful tools can streamline processes for you.

Those streamlined processes can free up lots of time for you to spend on the fun aspects of teaching. Three Google Forms Add-ons To Help You Manage Parent Volunteers. Google Forms offers a great way to collection information from parents when you're seeking parents to volunteer to chaperone a field trip, help out in your classroom, or bring in supplies for a classroom party. The problem that you might run into is having too many volunteers or too many people volunteer to do or bring the same thing.

Use Images as Answer Choices in Google Forms.