Why Arts Education Is Crucial, and Who's Doing It Best 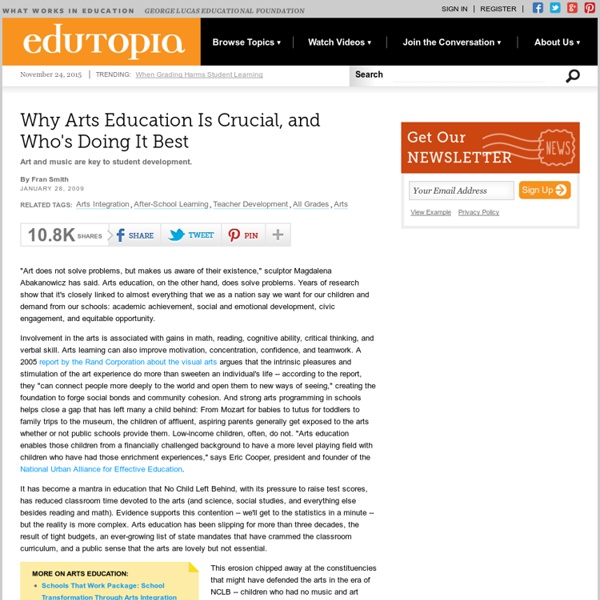 "Art does not solve problems, but makes us aware of their existence," sculptor Magdalena Abakanowicz has said. Arts education, on the other hand, does solve problems. Years of research show that it's closely linked to almost everything that we as a nation say we want for our children and demand from our schools: academic achievement, social and emotional development, civic engagement, and equitable opportunity. Involvement in the arts is associated with gains in math, reading, cognitive ability, critical thinking, and verbal skill. It has become a mantra in education that No Child Left Behind, with its pressure to raise test scores, has reduced classroom time devoted to the arts (and science, social studies, and everything else besides reading and math). This erosion chipped away at the constituencies that might have defended the arts in the era of NCLB -- children who had no music and art classes in the 1970s and 1980s may not appreciate their value now. Reviving Arts Education

Emotional Intelligence In 1990, in my role as a science reporter at The New York Times, I chanced upon an article in a small academic journal by two psychologists, John Mayer, now at the University of New Hampshire, and Yale’s Peter Salovey. Mayer and Salovey offered the first formulation of a concept they called “emotional intelligence.” Those were days when the preeminence of IQ as the standard of excellence in life was unquestioned; a debate raged over whether it was set in our genes or due to experience. I remember having the thought, just before this book was published ten years ago, that if one day I overheard a conversation in which two strangers used the phrase emotional intelligence and both understood what it meant, I would have succeeded in spreading the concept more widely into the culture. And the concept has spread to the far corners of our planet. Around the world Singapore has undertaken an active initiative in SEL, as have some schools in Malaysia, Hong Kong, Japan, and Korea.

Facilities Construction and Reform - A Blueprint For Great Schools Strategy No. 9 in A Blueprint For Great Schools report from the Transition Advisory Team dated August 9, 2011. Back to A Blueprint For Great Schools Table of Contents Home Page A substantial body of research correlates the impact of school facilities on educational achievement. Over the last decade, these studies have focused on architectural components such as air quality, temperature control, acoustics, daylight/illumination, and out-of-date equipment and furnishings, and are widely reported in the school facility literature.35 Recognizing the important role of facilities in student achievement, the state has provided capital assistance to Local Educational Agencies (LEAs) for over 60 years. Although the state has invested over $35 billion in K-higher education school facilities since 2002 with the passage of Propositions 1D, 55 and 47, the state does not have a system-wide facility inventory to make priority decisions for determining where school facility investments are most needed.

Tucson Schools Enhance Learning with the Arts Brain-based research supports an effort to improve student achievement through an interdisciplinary curriculum that combines creative pursuits and academic subjects. Running Time: 8 min. At Corbett Elementary School, in Tucson, Arizona, classical music floats through the hallways all day. First graders and fifth graders create operas. Every fourth grader learns violin. Kindergartners meet weekly with a trio from the Tucson Symphony Orchestra to explore rhythm and patterns and to establish literacy connections. Corbett is part of a sweeping initiative in the Tucson Unified School District to improve student achievement through an interdisciplinary curriculum that fuses the arts and academic subjects. "OMA is not only opening up children to the beauty of the world, it's also strengthening connections in the brain," says Sheila Govern, principal of Lyons Elementary School. Of course, nobody -- least of all, kids -- participates in art to test better.

» 9 Essential Skills Kids Should Learn Post written by Leo Babauta. Kids in today’s school system are not being prepared well for tomorrow’s world. As someone who went from the corporate world and then the government world to the ever-changing online world, I know how the world of yesterday is rapidly becoming irrelevant. I was trained in the newspaper industry, where we all believed we would be relevant forever — and I now believe will go the way of the horse and buggy. Unfortunately, I was educated in a school system that believed the world in which it existed would remain essentially the same, with minor changes in fashion. And that kinda makes sense, given that no one could really know what life would be like 20 years from now. We had no idea what the world had in store for us. And here’s the thing: we still don’t. How then to prepare our kids for a world that is unpredictable, unknown? This requires an entirely different approach to child-rearing and education. 1. 2. 3. 4. 5. 6. 7. 8. 9.

Teach21 Project Based Learning Given instruction in vocal technique, students will sing a wide variety of music styles, using proper intonation, dynamics, balance and blend and will evaluate their own performance. Before the Project The teacher should expose the choir to various styles of music (blues, Broadway tunes, spirituals, etc.) Once they have rehearsed different techniques relating to various styles, students may want to help in the decision making of which musical to perform. The teacher should pick musicals that fit the ranges of the students involved. The students should be given various musical examples to sing. Some middle school students may have not functioned in a project based classroom. Included in this PBL are a Group Observation Checklist and a Collaboration Rubric to help with assessing the students work in a group. There may need to be instruction on following cues, breathing, phrasing or interpretation of the lyrics with regard to style. During the Project After the Project

Oklahoma's Arts Program Develops Multiple Intelligences The state's schools emphasize the arts through a network dedicated to nurturing creativity among students and teachers. The arts are part of almost everything that happens at Woodrow Wilson Elementary School, in Bartlesville, Oklahoma. Look up at the covering of the walkway as you enter, and you'll see the mural -- brilliant blue sky, sun, cloud puffs with smiling kids' faces. It was conceived, planned, and painted by third graders. Wallace has taught at Wilson for thirteen years, through three principals, and has always done art projects with her kids. "Before, I felt the administration thought art was fluff," Wallace says. The A+ story began in 1998, when the Kirkpatrick Foundation, in Oklahoma City, invited a group of educators to explore school-reform approaches. The group searched the country for models that emphasized arts, required a whole-school commitment, were rooted in the daily practice of the classroom teacher, and were shown through research to be effective.

Deep and Surface learning It is important to clarify what they are not. Although learners may be classified as “deep” or “surface”, they are not attributes of individuals: one person may use both approaches at different times, although she or he may have a preference for one or the other. They correlate fairly closely with motivation: “deep” with intrinsic motivation and “surface” with extrinsic, but they are not necessarily the same thing. Either approach can be adopted by a person with either motivation. There is a third form, known as the “Achieving” or strategic approach, which can be summarised as a very well-organised form of Surface approach, and in which the motivation is to get good marks. Time to 'fess up: I was that strategic learner. The features of Deep and Surface approaches can be summarised thus: (based on Ramsden, 1988) The Surface learner is trying to “suss out” what the teacher wants and to provide it, and is likely to be motivated primarily by fear of failure. Two other points: More on Marton

The arts The arts represent an outlet of expression, that is usually influenced by culture and which in turn helps to change culture. As such, the arts are a physical manifestation of the internal creative impulse. Major constituents of the arts include literature – including poetry, novels and short stories, and epics; performing arts – among them music, dance, and theatre; culinary arts such as baking, chocolatiering, and winemaking; media arts like photography and cinematography, and visual arts – including drawing, painting, and sculpting. Some art forms combine a visual element with performance (e.g. film) and the written word (e.g. comics). From prehistoric cave paintings to modern day films, art serves as a vessel for storytelling and conveying mankind's relationship with its environment. Definition[edit] In its most basic abstract definition, art is a documented expression of a sentient being through or on an accessible medium so that anyone can view, hear or experience it. History[edit]

Troubled Teens Explore Their Artistic Side A San Francisco program for juvenile offenders fosters creativity, literacy, and freedom of expression through hip-hop. Live a day in my shoes What you think you would do? You think you could handle it, my thoughts? You think you could stand it? During two weeks last summer, twelve students at a juvenile court-mandated school in San Francisco wrote intense, deeply personal pieces of hip-hop and spoken word, set them to music, produced a studio-quality CD, and performed at a local club. The project, called Lyrical Minded, had several goals. Francisca Sanchez, the San Francisco Unified School District's associate superintendent of academics and professional development, explains that the district wants to make the arts more accessible to the most marginalized students. Have you ever been used and abused by people you thought would be good to you? The Principals' Center Collaborative, as the school is officially known, has about sixty students from ninth through twelfth grade.

Choice Point: Align Your Purpose - A Documentary Film by Harry Massey Choice Point was born of a passion and a vision of a better world through a collective humanity. It is a feature-length documentary film which probes the issues of transformational change and how when one person transforms his or her own life, that person can contribute in a positive way to the shaping of the world. And now, for the first time, we are opening up the opportunity for like-minded people to share in our vision, support the film and get their hand on money-can't-buy rewards! The world is facing multiple “choice points” at this moment in history: individuals are making choices to change their nations, nature is giving us a wake-up call, economies are struggling, and for many of us the future looks uncertain. Our film sends a message of hope, when hope is required by all. A Few People We Have Interviewed We have an extensive list of people we have interviewed for the movie including: Who's Behind Choice Point? Why We Need Your Help The Launch The Rewards P.S.

Spectacle In general, spectacle refers to an event that is memorable for the appearance it creates. Derived in Middle English from c. 1340 as "specially prepared or arranged display" it was borrowed from Old French spectacle, itself a reflection of the Latin spectaculum "a show" from spectare "to view, watch" frequentative form of specere "to look at."[1] The word spectacle has also been a term of art in theater dating from the 17th century in English drama. Ancient cultural origins[edit] The term originated from the Roman practice of staging circuses, in the tradition of the Roman elite of providing "bread and circuses" to maintain civil order by distracting the populace from underlying social and economic problems. Low and high culture[edit] Spectacle operates in two contexts simultaneously. Low and high culture mingled in the spectacle as long as folk productions of spectacle were possible. The Masque and spectacle[edit] The Hollywood Spectacular[edit] Spectacle and Society[edit] See also[edit]