How to Make Sense of Any Mess. MetaMap - Cabrera Research Lab. Leading Edge Cognitive Capacities. It is the capacity to see and know unhindered by ego, or self-identity, and to do so intentionally that is TransEgoic Cognition. 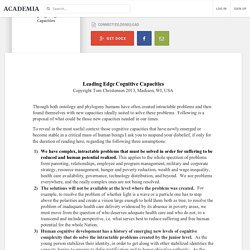 We can think other than thru our construct of self. To think at a junior level, constrained by the consistencies demanded of identity, limits to a lethal degree what we can see and know and dream up about ourselves and our world. A place to explore new ideas in Learning. For his students and collaborators in systems science, systems engineering and systems biology. An Introduction to System Mapping. Much has been written recently about the importance of using a system lens, or focusing on system change, to make real progress against some of society’s toughest challenges. 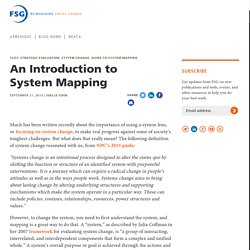 But what does that really mean? The following definition of system change resonated with us, from NPC’s 2015 guide: "Systems change is an intentional process designed to alter the status quo by shifting the function or structure of an identified system with purposeful interventions. Tools for System Dynamics. Systems Thinking: Seeing How Everything is Connected. “People normally cut reality into compartments, and so are unable to see the interdependence of all phenomena. 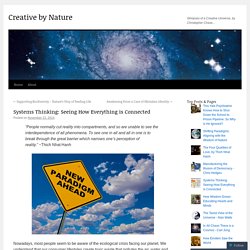 To see one in all and all in one is to break through the great barrier which narrows one’s perception of reality.” ~Thich Nhat Hanh Nowadays, most people seem to be aware of the ecological crisis facing our planet. We understand that our consumer lifestyles create toxic waste that pollutes the air, water and land. We understand that these come back to us and may account for the rise in health problems such as cancer, asthma and allergies. Joe Hsueh on Complexity and Sensemaking.

The art and science of systems change. Until recently, the momentum driving US businesses toward greater sustainability came from big, influential companies: GE with its ecomagination campaign, Walmart with its bold environmental goals, Google with more than $1bn in renewable energy investments and Nike with its pioneering design work, among others. 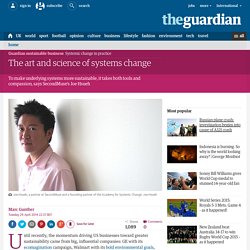 Lately, though, much of the most exciting work in sustainable business has focused on systems change – sometimes within an industry, sometimes up and down corporate supply chains and sometimes across industries and geographies. Systems-change initiatives like the The Sustainability Consortium, the Sustainable Apparel Coalition and ZHDC, which stands for Zero Discharge of Hazardous Chemicals, differ in their approach and structure, but they are all tackling problems too sprawling and too complicated for even the biggest companies to solve on their own. 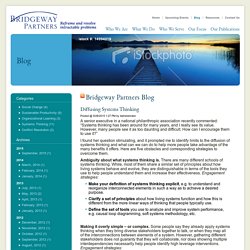 However, many people see it as too daunting and difficult. How can I encourage them to use it?” I found her question stimulating, and it prompted me to identify limits to the diffusion of systems thinking and what can we can do to help more people take advantage of the many benefits it offers. Ambiguity about what systems thinking is. Make your definition of systems thinking explicit, e.g. to understand and reorganize interconnected elements in such a way as to achieve a desired purpose. Making it overly simple – or complex. The Donella Meadows Institute. Bridgeway Partners > Home. Emergence. Emergence is perhaps the fundamental property of systems. 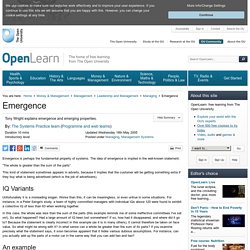 The idea of emergence is implied in the well-known statement: “The whole is greater than the sum of the parts” This kind of statement sometimes appears in adverts, because it implies that the customer will be getting something extra if they buy what is being advertised (which is the job of advertisers). IQ Variants Unfortunately it is a misleading slogan. In this case, the whole was less than the sum of the parts (this example reminds me of some ineffective committees I've sat on!). An example For instance, I can state that "The whole exhibits properties that are different from those found in any of its parts" Of course, this isn't a very impressive as an advertising slogan, but I want something better than a mere slogan; I want a statement that has practical value, which means that it must have some semblance of truth and reliability for me. 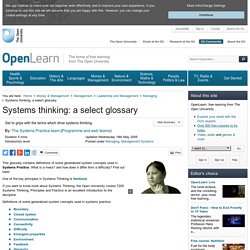 What is a mess? And how does it differ from a difficulty? Find out here! One of the key principles in Systems Thinking is feedback9. If you want to know more about Systems Thinking, the Open University course T205 Systems Thinking, Principles and Practice is an excellent introduction to the discipline. Definitions of some generalized system concepts used in systems practice. Boundary The borders of the system, determined by the observer(s), which define where control action can be taken: a particular area of responsibility to achieve system purposes.

Free Simulation and Modeling in your Browser. Beyond Connecting the Dots. Kumu.