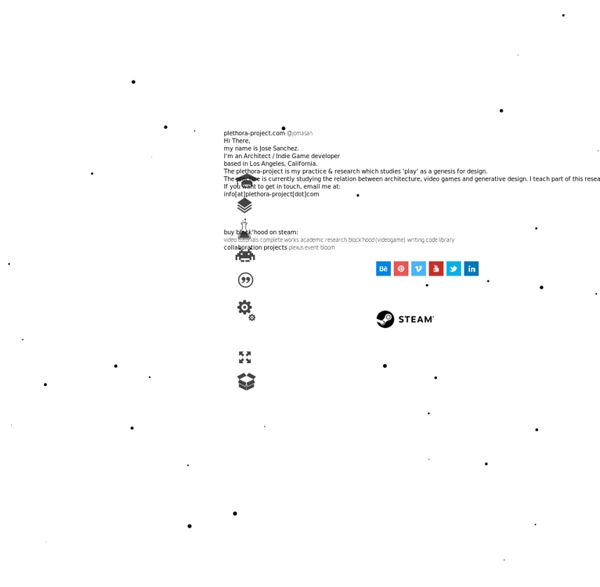 plethora-project.com @jomasan Hi There, my name is Jose Sanchez. I'm an Architect/Game developer based in Los Angeles, California. The plethora-project is my practice & research which studies 'play' as a genesis for design. The practice is currently studying the relation between architecture, video games and generative design.

Tutorials This series of tutorials shows you how to create a mapping with data gathered on an IPhone or other device. Maps are created using both Google Earth and ArcMap. In the tutorials we cover importing data collected in three ways: with the TerraPad App, from geotagged Photos, and with GPS recording software (such as My Tracks). The base map was generated using GIS layers from New York City's NYC Map available here:

Ausgaben - bildwissenschaft.org View for printing Specification of Morphological Models with L-Systems and Relational Growth Grammars Author: Winfried Kurth [published in: Computational Visualistics and Picture Morphology (Themenheft zu IMAGE 5)] [365 KEEP SKETCHING CHALLENGE] Chilin at the airport, I made a stop at the IT store. I saw the latest Galaxy Note Pro 12.2 inch tablet – with a sensitive pen pressure Read More Last night I took the plane from Saigon to Singapore. Gil Akos Interactive Prototyping is a process which strives to empower the designer – giving them the ability to build and prototype ideas in a more fluid and cost effective manner. About this Workshop: It is without a doubt that the design process encompasses many things. From ideation, 3D modeling, programming, and manufacturing to material testing, marketing, life cycle assessment, and cost analysis; the designer is often confronted with many challenges.

PANELIZE SURFACE – FORMFARM This tool was created to take a surface and rationalize it into flat panels that can be connected via a simple hinge connections. An input curve can be used to scale the panels based on their proximity. Click to Download Panelize Surface (431) grasshopper (As reported earlier in this previous post) Daniel Piker is developing ways to accurately simulate physical behavior in his Grasshopper component "Kangaroo". In the latest release there are tools for simulating bending geometry. This is nothing but a revolution for this investigation! Never before have I been able to recreate bending geometry so accurately in an "artificial way".

seeing the world in systems Refraction Reflection Refraction A rainbow is an optical and meteorological phenomenon – thus, a rainbow is not an object, and cannot be physically approached. Posted in Home, Research Tagged 2013, dispersion, Olafur Eliasson, physics, processingjs, rainbow, ray, water, wavelength

PRAUD Project : Louisville Children's Museum International Competition organized by AIA Result : 3rd Prize Year : 2014 Template:Grasshopper Data Tree editing Introduction Data Tree Grasshopper uses, in contrast to a programming environment, no object names to define an object. LampSYSTEM LampSYSTEM is a project that blends existing systems and computation to breed a new emergent one. LampSYSTEM from Joao Albuquerque on Vimeo. Reusing the "Bunch of Bulbs" lamp (by KiBiSi) principle, LampSYSTEM uses a V shaped plumbing intersection as the node for an L-System structure.This node is used in an recursive algorithm, testing self-intersection and area/direction to occupy as it grows 3-dimensionally.The outcome is a tree-like structure that grows and glows through a predefined direction, having as branch terminals light bulbs which illuminate the structure's inhabited space. //back to main//

GH hexagonal mesh 01 With this definition we can plot all kinds of patterns formed by planar closed curves on a surface with double curvature achieving this effect of skin with variable apertures depending on their distance to one or more points attractors. The script works optimizing meshes to obtain a smooth skin using weaverbird component. CONFLUENCES_workshop series Gray Nebula - Clint Fulkerson Carbon-based formations in suspension ^ Gray Nebula 1, 2012, graphite pencil on paper, 10" x 8", Private Collection ^ Gray Nebula 2, 2012, graphite pencil on paper, 10" x 8", Private Collection Tom Wiscombe Design Have you ever come across a building, renderings of a building that is- a potential building- and thought, ‘Why the hell not?’ The PUCPR Dormitory planned for the Pontifical Catholic University of Puerto Rico by Tom Wiscombe Design is such a building. Courtesy of Tom Wiscombe Design

Grasshopper For designers who are exploring new shapes using generative algorithms, Grasshopper is a graphical algorithm editor tightly integrated with Rhino’s 3-D modeling tools. Unlike RhinoScript, Grasshopper requires no knowledge of programming or scripting, but still allows designers to build form generators from the simple to the awe-inspiring. What is Grasshopper? Example of a grasshopper model to design a sun shading system Grasshopper (GH) is a programming interface for designer. Instead of using programming languages, it uses a lego-like interface.