How to Randomize Google Forms Response Options. Three Google Forms Add-ons To Help You Manage Parent Volunteers. Google Forms offers a great way to collection information from parents when you're seeking parents to volunteer to chaperone a field trip, help out in your classroom, or bring in supplies for a classroom party. 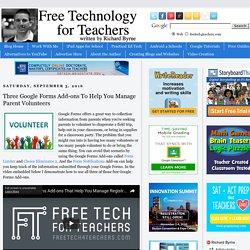 The problem that you might run into is having too many volunteers or too many people volunteer to do or bring the same thing. You can avoid that scenario by using the Google Forms Add-ons called Form Limiter and Choice Eliminator 2. 15 Google Forms Tutorial Videos. How to Get Add-ons in the New Version of Google Forms. How to Resize Videos in Google Forms. 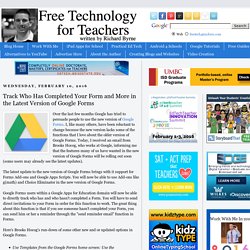 I, like many others, have been reluctant to change because the new version lacks some of the functions that I love about the older version of Google Forms. Today, I received an email from Brooks Hocog, who works at Google, informing me that the features many of us have wanted in the new version of Google Forms will be rolling out soon (some users may already see the latest updates). Use Flubaroo to Share & Print Automatically Graded Quizzes. Last week two great features were added to Flubaroo, a popular Google Sheets Add-on. 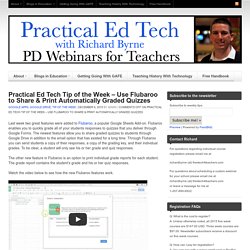 Flubaroo enables you to quickly grade all of your students responses to quizzes that you deliver through Google Forms. The newest features allow you to share graded quizzes to students through Google Drive in addition to the email option that has existed for a long time. Through Flubaroo you can send students a copy of their responses, a copy of the grading key, and their individual grades. To be clear, a student will only see his or her grade and quiz responses. The other new feature in Flubaroo is an option to print individual grade reports for each student.

Watch the video below to see how the new Flubaroo features work. Flubaroo also contains an automatic grading feature which will send students their grades almost as quickly as they complete a quiz. Here are this week’s most popular posts from FreeTech4Teachers.com: 1. 5 Five Google Forms Add-ons I Frequently Recommend. In the course of a year I lead many training sessions about Google Forms. 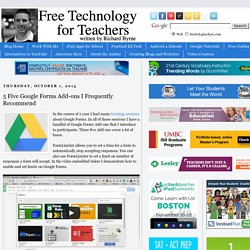 How to Eliminate Choices as They're Used on Google Forms. How to Enable and Set Limits on Your Google Forms. Create a Simple Check-out/ Check-in System With Google Forms. CheckItOut is a great little Google Forms Add-on that allows you to create a simple check-out/ check-in system. 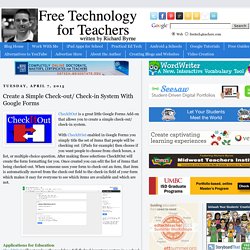 With CheckItOut enabled in Google Forms you simply title the set of items that people will be checking out (iPads for example) then choose if you want people to choose from check boxes, a list, or multiple choice question. After making those selections CheckItOut will create the form formatting for you.

Once created you can edit the list of items that being checked-out. When someone uses your form to check-out an item, that item is automatically moved from the check-out field to the check-in field of your form which makes it easy for everyone to see which items are available and which are not. Applications for EducationCheckItOut will not replace the need for a full-fledged inventory system in a school library.

Create a Lab / Room Scheduler in Google Sheets. Lab Scheduler is a neat Google Sheets Add-on that enables you to easily create and maintain a lab or room reservation system for your school. 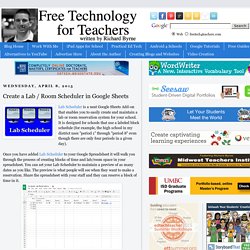 It is designed for schools that use a labeled block schedule (for example, the high school in my district uses "period 1" through "period 8" even though there are only four periods in a given day). Once you have added Lab Scheduler to your Google Spreadsheet it will walk you through the process of creating blocks of time and lab/room space in your spreadsheet. 5 Things You Did Not Know About Google Forms. Google Forms allows you to create pages so that all of the questions are not all on one screen. 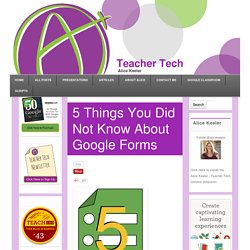 Start by creating all of your pages. Use the “Add item” drop down menu to add multiple page breaks. For Multiple Choice questions there is an option to “Go to page based on answer.” When students finish filling out a Google Form the default message is “Your response has been recorded.” 7 Great Google Forms Tools for Teachers. February 25, 2015 Since its release a few months ago, add-ons store for Google Forms has several interesting tools added to it. 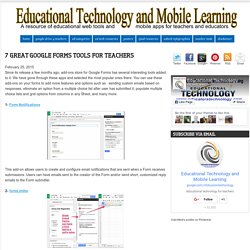 We have gone through these apps and selected the most popular ones there. You can use these add-ons on your forms to add more features and options such as : sending custom emails based on responses, eliminate an option from a multiple choice list after user has submitted it, populate multiple choice lists and grid options from columns in any Sheet, and many more. 1- Form Notifications This add-on allows users to create and configure email notifications that are sent when a Form receives submissions. Users can have emails sent to the creator of the Form and/or send short, customized reply emails to the Form submitter. 2- formLimiter Close your survey automatically, after a maximum number of responses is reached, or at a date and time of your choosing.

An Administrator's guide to Google forms. The Google Apps for Education suite includes a number of robust tools that can streamline administrative tasks. 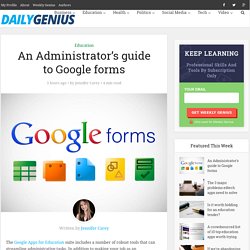 In addition to making your job as an administrator easier, using them allows you to model effective technology adoption with your staff. One of my favorite tools to tackle this type of tasks is Google Forms, one of tools within Google Drive.