Understanding Local Max. My guess is that you've been wrestling with your Local Max. If your organization or even your career is stuck, it may just be because of this chart. Everyone starts at that dot at the bottom left corner. You're not succeeding because you haven't started yet. Then you try something. If it works, you end up at point A. A is where you see results as the direct output of a strategy and hard work. Of course, being a success-oriented capitalist, that's not enough. So you try harder. And that is where most people stay. You've got a very good job as an art director. You have 100 competitors in an industry that is self-described as a commodity.

You've got summer camp with 80 kids in it. The lie of Local Max is this: the chart is incomplete. Local Max isn't actually that great when you realize that Big Max is not particularly far away. The problem is that to get to Big Max, you need to go through step C, which is a horrible and scary place to be. The moderation glitch. More doesn't scale forever. Why are we so bad at enaging with this obvious truth? In Malcolm's new book, he points out that our expectation is that most things will respond in a linear way. Model Report: Systems Thinking, Modeling and Simulation News. Rethinking Systems Thinking: Learning and coevolving with the world.

How sense and respond organizations differ from make and sell organizations. S&R as Post-Industrial Managerial Paradigm An adaptive management paradigm is the missing element in current attempts to transform businesses into adaptive organizations. 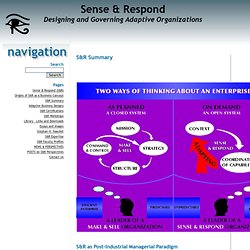 Because adaptive behavior is typically unplanned—often ad hoc– it is intrinsically inefficient and therefore persistently undermined by the existing efficiency-centric management paradigm. The metrics and practices fostered by this industrial age model frustrate attempts to empower people, inculcate a customer orientation, leverage adaptive technologies, and respond to unanticipated change. Those firms that have made a degree of progress in becoming more adaptive (or at least more agile or resilient) have typically relied on what Bruce Harreld of IBM called “the heroic model” of management – counting on exceptionally talented people to break the rules without breaking too much glass.

Sense & Respond is a robust replacement of the legacy managerial paradigm. The Transformational Foundations of Sense & Respond. Is the Tipping Point Toast? Don't get Duncan Watts started on the Hush Puppies. 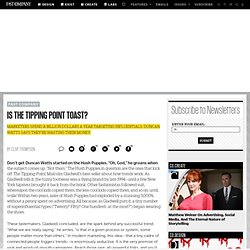 "Oh, God," he groans when the subject comes up. "Not them. " The Hush Puppies in question are the ones that kick off The Tipping Point, Malcolm Gladwell's best-seller about how trends work. As Gladwell tells it, the fuzzy footwear was a dying brand by late 1994--until a few New York hipsters brought it back from the brink.

Other fashionistas followed suit, whereupon the cool kids copied them, the less-cool kids copied them, and so on, until, voilà! These tastemakers, Gladwell concluded, are the spark behind any successful trend. Yet, if you believe Watts, all that money and effort is being wasted. In the past few years, Watts--a network-theory scientist who recently took a sabbatical from Columbia University and is now working for --has performed a series of controversial, barn-burning experiments challenging the whole Influentials thesis. And this is not, he argues, mere academic whimsy. Why did Milgram get it wrong? Robustness vs. Resilience. An awesome slide presentation from Dave Snowden of Cognitive Edge. 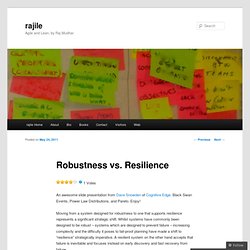 Black Swan Events, Power Law Distributions, and Pareto. Enjoy! Moving from a system designed for robustness to one that supports resilience represents a significant strategic shift. Whilst systems have commonly been designed to be robust – systems which are designed to prevent failure – increasing complexity and the difficulty it poses to fail-proof planning have made a shift to “resilience” strategically imperative. A resilient system on the other hand accepts that failure is inevitable and focuses instead on early discovery and fast recovery from failure. Like this: Like Loading... Solarium.

Finalkeywords by The Point People. Four types of Systems 2. Ecological Systems Such systems contain mechanistic, animate, and social systems as parts and, therefore, containing some parts that have purposes of their own. 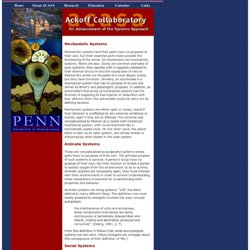 However, these systems as a whole are conceptualized as having no purpose of their own. Nature, of course, is commonly taken to be an ecological system as is our environment. Ecological systems serve the purposes of their animate and social parts, and provide necessary inputs to these and open deterministic systems. They also provide a receptacle for their waste as well as their useful products. Animate and social systems are frequently confronted with situations in which their choices can affect their effectiveness, either positively or negatively.