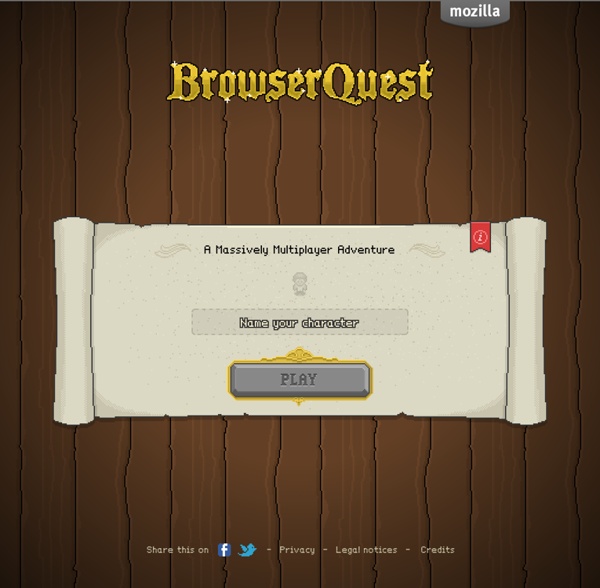 or reset your character All your items and achievements will be lost. Are you sure you wish to continue? cancel - click anywhere to close - BrowserQuest is a multiplayer game inviting you to explore a world of adventure from your Web browser.

Project Zetsubou We’re there! Instructions For the games, you’re going to need a PSP with custom firmware installed. It’s an incredibly simple process to install a CFW, but there are plenty of tutorials out there (such as this one), so I won’t go into it here. Once you’re on a CFW, follow any instructions included in the individual downloads and then drop the game into the ISO folder on your PSP. [Imagine Chat] Role Players Creed 1. I will maintain the illusion of the game by staying in character whenever possible. I will withhold out of character comments until absolutely necessary and even then I will whisper or ICQ them to the other players. 2. If I discuss the game with other players out of character, I will not allow my character to be influenced by this knowledge without express permission of the other players.

Welcome to Neopets! You've clicked on a link that will take you outside of Neopets.com. We do not control your destination's website, so its rules, regulations, and Meepit defense systems will be different! Are you sure you'd like to continue? It is a journeyI must face...alone.*dramatic music* I want to stay on Neopets,where the dangers ofMeepit invasion are taken seriously. Mediocrity Mediocrity was invented as a game by Douglas Hofstadter and published in his book Metamagical Themas: Questing for the Essence of Mind and Pattern. In its original form, it is simply a guessing game, similar to Rock, Paper, Scissors, but a rather cerebral version. By playing with some friends, I (Greg Weidman) have assembled rules that make for a simple, hilarious card game for 3 or 4 players. For the theoretically-minded among you, this is a level-3 mediocrity game.

Minecraft Mods If you’ve never heard of Portal, this mod will be something really new and exciting for you, and if you did you already know to expect awesome. For those unfamiliar, Portal is a game franchise developed by Valve which bases it’s puzzle gameplay on shooting your portal gun to place portals that are connected. There is a pair or portals, and walking through one of them makes you exit through another. Now that you have the core concept in mind, there is a lot more stuff in the game, and therefore in this mod. [Beginner] Monsters a beginner should farm for So you've been playing for a week or two and don't know what to do with your spare stamina? Have you been leveling your starter dragon with pendras and wondering why you can't beat certain dungeons? Wondering why the game is suddenly so hard after Castle of Satan? Well, it's because you don't have the "core team".

Cyberformance Cyberformance refers to live theatrical performances in which remote participants are enabled to work together in real time through the medium of the internet, employing technologies such as chat applications or purpose-built, multiuser, real-time collaborative software (for example, UpStage, Visitors Studio, the Waterwheel Tap and other platforms). Cyberformance is also known as online performance, networked performance, telematic performance, and digital theatre; there is as yet no consensus on which term should be preferred, but cyberformance has the advantage of compactness. For example, it is commonly employed by users of the UpStage platform to designate a special type of Performance art activity taking place in a cyber-artistic environment. History and context[edit] The Hamnet Players. Founded by Stuart Harris, this group performed in IRC; their earliest performance was "Hamnet" in 1993.[5]The Plaintext Players.

Dragon dump ~ A Universal Dragon Cave Hatchery and Fansite Welcome to the New Dragon Dump! This is a website which helps users of Dragon Cave hatch their dragons! This website is completely automated so all you have to do is input your scroll name and click submit and your dragons will be in the system! We look forward to hosting your dragons! Heads up! John Conway's Game of Life The Game The Game of Life is not your typical computer game. It is a 'cellular automaton', and was invented by Cambridge mathematician John Conway. This game became widely known when it was mentioned in an article published by Scientific American in 1970.