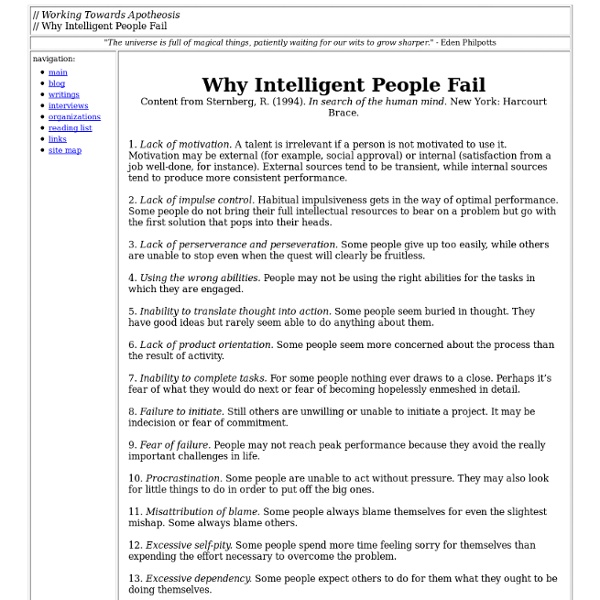 120 Ways to Boost Your Brain Power Here are 120 things you can do starting today to help you think faster, improve memory, comprehend information better and unleash your brain’s full potential. Solve puzzles and brainteasers.Cultivate ambidexterity. Use your non-dominant hand to brush your teeth, comb your hair or use the mouse. 6 Random Things (Other Than Drugs) That Reduce Pain Your nearest drugstore is full of completely fake pain remedies, from shoe magnets to magical ground-up shark bones. But while these new age medicines are little more than placebos, science has found a whole lot of unexpected -- and downright weird -- ways you can control pain without ever swallowing a pill. Things like ...

8 Ways to be UBER Charismatic What did JFK, Marilyn Monroe and Hitler all have in common? They were all renowned charismatics that lit up every room they entered. You’ve most likely met one of these kinds before. The guy/girl at the party. They possess some strange quality that causes them to be liked by everyone and constantly at the center of attention. Their eyes and the way they carry themselves convey power and magnetism and you can’t quite figure out why. Theories of Intelligence - Overview of Theories of Intelligence What exactly is intelligence? How do researchers define and measure this mental quality? While intelligence is one of the most talked about subjects in psychology, there is no standard definition of what exactly constitutes 'intelligence.'

Hacking Knowledge: 77 Ways to Learn Faster, Deeper, and Better If someone granted you one wish, what do you imagine you would want out of life that you haven’t gotten yet? For many people, it would be self-improvement and knowledge. Newcounter knowledge is the backbone of society’s progress. Great thinkers such as Leonardo da Vinci, Thomas Edison, Benjamin Franklin, Albert Einstein, and others’ quests for knowledge have led society to many of the marvels we enjoy today. Personality Disorder Test - Personality Test This test, sponsored by 4degreez.com, is meant to help determine whether or not you have a personality disorder. It is not meant to be used as a diagnostic tool, but rather as a tool to give you insight into a potential disorder that may be having a negative impact on your life. If you believe you may be suffering from a personality disorder or any other disorder, you should ask your family doctor to recommend a therapist in your area to meet with. In addition to this personality test we have psychology forums to discuss issues with other visitors. A personality disorder is basically a set of traits that combine to negatively affect your life.

"What Does Love Mean?" See How 4-8 Year-Old Kids Describe Love Article By:Ladan Lashkari A group of professional people posed this question to a group of 4 to 8 year-olds: "What does love mean?" The answers they got were broader and deeper than anyone could have imagined. See what you think...

Psychological Catch-22s Yossarian, the protagonist of Joseph Heller's classic novel, , wants to be excused from air combat. To be excused, he needs only to prove that he is mentally unstable, but there's a catch: the very act of asking to be excused would show that he is sane. In other words, there's no way out. The term "catch-22" has since been used to describe any situation where circular logic guarantees an undesired outcome, no matter what a person does. Although catch-22s are typically found in legal or bureaucratic contexts, they also turn up in psychology. Here are some notable examples.

25 Useful Brainstorming Techniques by Celes on Feb 9, 2009 | ShareThis Email This Post Caught with a problem you cannot solve? Need new ideas and solutions? The process of brainstorming requires you to think out of the box that is keeping you in the problem. The idea for this post was triggered by a question from a reader, who asked me on my thoughts of the best brainstorming methods to achieve the best results.

How To Train Yourself To Be In The Mood You Want Dec 27, 2010 When you have major changes going on in your life, or you’re just frustrated about where you are, it’s easy to get trapped in a cycle of depression, bad moods and frustration. I know, I’ve been there … and when I’m not careful, I still get there more than I want to. But when I’ve had a particularly hard time, I hit these moments where I’m in a foul mood, or I’m just feeling paralyzed, and I’m just stuck.

November « 2012 « Think Pacific Gap Year Volunteer Blog Having dried our eyes from the emotional farewell in Tovulailai, the team were ready to embark on life in Lawaki or as Chris likes to call it ‘La wacky’. Another fun filled week included, the welcoming feast, bilo making, family night and the feature Think Pacific 7s and Netball tournament, has had the team asking ‘where has this week gone?’ With no kindi ever before in Lawaki, Dani, Bronwen, Lizzie, Fabio and Langer have been fantastic in introducing new learning concepts and launching the daily routine. Learned Helplessness The Misconception: If you are in a bad situation, you will do whatever you can do to escape it. The Truth: If you feel like you aren’t in control of your destiny, you will give up and accept whatever situation you are in. In 1965, a scientist named Martin Seligman started shocking dogs. He was trying to expand on the research of Pavlov – the guy who could make dogs salivate when they heard a bell ring.

How to Detect Lies - body language, reactions, speech patterns Interesting Info -> Lying Index -> How to Detect Lies Become a Human Lie Detector (Part 1) Warning: sometimes ignorance is bliss. After gaining this knowledge, you may be hurt when it is obvious that someone is lying to you. Home Page This wiki is a collaborative environment for exploring ways to become a better thinker. Topics that can be explored here include MemoryTechniques, MentalMath, CriticalThinking, BrainStorming, ShorthandSystems, NotebookSystems, and SmartDrugs. Other relevant topics are also welcome. SiteNews Wiki Topics