Focus Your Ambitions with the Lifehacker Hierarchy of Goals 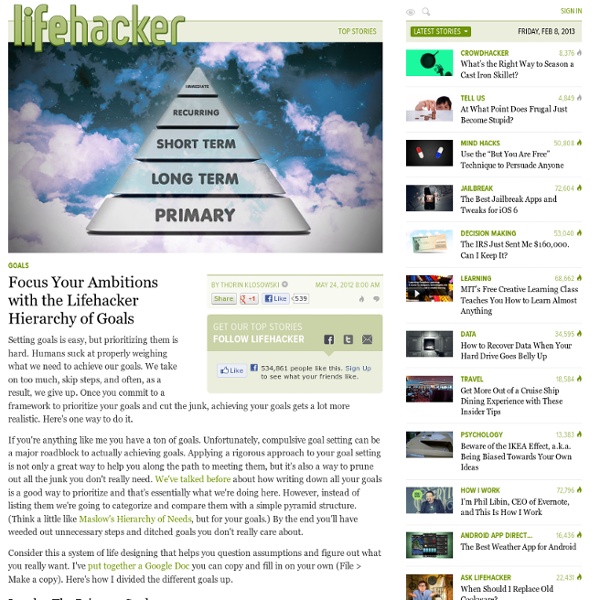 Setting goals is easy, but prioritizing them is hard. Humans suck at properly weighing what we need to achieve our goals. We take on too much, skip steps, and often, as a result, we give up. Once you commit to a framework to prioritize your goals and cut the junk, achieving your goals gets a lot more realistic. Here's one way to do it.P If you're anything like me you have a ton of goals. Consider this a system of life designing that helps you question assumptions and figure out what you really want. Level 1: The Primary GoalsP SExpand Your primary goals are the base of all other goals—the one or two things you aspire to do before you die. Level 2: Long Term GoalsP Your long term goals are the major goals that are required to get to the primary goals. Level 3: Short Term GoalsP Think of short term goals as weeks or months out. Level 4: Recurring GoalsP Your recurring goals are what you want to do daily/weekly/monthly regardless of what else is going on. Level 5: Immediate GoalsP Related:  Loading Bay

Getting Real Here are the 16 chapters and 91 essays that make up the book. Introduction chapter 1 What is Getting Real? The Starting Line chapter 2 Build LessUnderdo your competition What's Your Problem? Stay Lean chapter 3 Less MassThe leaner you are, the easier it is to change Lower Your Cost of ChangeStay flexible by reducing obstacles to change The Three MusketeersUse a team of three for version 1.0 Embrace ConstraintsLet limitations guide you to creative solutions Be YourselfDifferentiate yourself from bigger companies by being personal and friendly Priorities chapter 4 What's the big idea? Feature Selection chapter 5 Half, Not Half-AssedBuild half a product, not a half-ass product It Just Doesn't MatterEssentials only Start With NoMake features work hard to be implemented Hidden CostsExpose the price of new features Can You Handle It? Process chapter 6 The Organization chapter 7 Staffing chapter 8 Interface Design chapter 9 Code chapter 10 Words chapter 11 Pricing and Signup chapter 12 Promotion chapter 13

Your Life. Organized. The Book by 37signals Dynamic Templates v2.05: The Next Generation The D*I*Y Planner Dynamic Template application has now hit version 2.0, ready to produce any size and shape of yearly, monthly, weekly, and daily calendars for your printing pleasure. All designs are based upon the Classic versions of the D*I*Y Planner, along with input from Doug, and so will integrate completely into your DiyP setup. (The daily design was created by Doug, but was never implemented as a static template owing to the insane amount of repetitive work required.) Simply select your paper size, choose the calendar type, and tweak the settings to come up with your own printable set of calendars that perfectly fit your planner and your lifestyle. The Mac version was built in Mac OS 10.4.11, using Qt 4.5.2 Here's a shot of the Mac version as it starts up: The Windows version was built in Windows XP, using Qt 4.5.2 and MinGW Here's the Windows version as it starts up: This is multi-platform software. Some Major Changes: One application instead of many. Screenshots: Version History:

Time Management from the Inside Out, Second Edition: The Foolproof System for Taking Control of Your Schedule -- and Your Life: Julie Morgenstern: 9780805075908: Amazon.com Two Lists You Should Look at Every Morning - Peter Bregman by Peter Bregman | 11:00 AM May 27, 2009 I was late for my meeting with the CEO of a technology company and I was emailing him from my iPhone as I walked onto the elevator in his company’s office building. I stayed focused on the screen as I rode to the sixth floor. I was still typing with my thumbs when the elevator doors opened and I walked out without looking up. Then I heard a voice behind me, “Wrong floor.” The world is moving fast and it’s only getting faster. So we try to speed up to match the pace of the action around us. But that’s a mistake. Never before has it been so important to say “No.” It’s hard to do because maybe, just maybe, that next piece of information will be the key to our success. A study of car accidents by the Virginia Tech Transportation Institute put cameras in cars to see what happens right before an accident. Now is a good time to pause, prioritize, and focus. List 1: Your Focus List (the road ahead)What are you trying to achieve?

The Laziness Paradox: Embrace Your Weaknesses to Accomplish More I was recently having dinner with a friend who was telling me his plan to get in shape. He had always been on the skinny side and wanted to bulk up a bit. His plan was to gain ten pounds over the following two months. Being the good friend I am, I told him he’d probably fail. My response may seem rude or pessimistic, but it was the truth. Instead I gave him a better plan. The problem with my friend is a general one. You’re Lazier, Weaker and Dumber Than You Think I believe, on the whole, confidence is a good thing. The reason confidence works is that it is usually in the abstract. This advantage of confidence may explain why people are so overconfident. The weakness of confidence is when you’re forming concrete, short-term plans. My friend’s fitness goal is a clear example. You’re Not Really in Control Think of any recent action you took: reading this article, taking a shower, eating breakfast. Obviously you did. An interesting experiment provides insight into this frightening reality.

The Checklist Manifesto « Atul Gawande Over the past decade, through his writing in The New Yorker magazine and his books Complications and Better, Atul Gawande has made a name for himself as a writer of exquisitely crafted meditations on the problems and challenges of modern medicine. His latest book, The Checklist Manifesto, begins on familiar ground, with his experiences as a surgeon. But before long it becomes clear that he is really interested in a problem that afflicts virtually every aspect of the modern world–and that is how professionals deal with the increasing complexity of their responsibilities. It has been years since I read a book so powerful and so thought-provoking. Gawande begins by making a distinction between errors of ignorance (mistakes we make because we don’t know enough), and errors of ineptitude (mistakes we made because we don’t make proper use of what we know). The danger, in a review as short as this, is that it makes Gawande’s book seem narrow in focus or prosaic in its conclusions.

How To Stay Productive After Work I've had to come to terms with this. I have ideas for things that would be cool, but I'm usually too tired in the evening. After getting everyone fed, I just want to sit on the couch and watch YouTube. My husband has been great, nudging me towards not beating myself up over needing to relax. This article is probably for the single people on this site with no kids (93% of readers). Also, why YouTube? I am seriously addicted to Let's Plays of various RPGs, especially ones that I played when I was a kid, but only vaguely remember now. I could play them, true, but then I'd be up until 4am.

The Snarky Voice in Your Head Is Killing Your Productivity; Here’s How to Stop It SExpand I'm pretty sure no one in their right mind would tell George Carlin to "Just be nice". There are also obvious merits to being a snark, like the ability to speak what's really on your mind. Not just smile, act dumb, and play along. The difference is that George Carlin was a comedian. In fact, one of the examples that one of our psychologists uses frequently that didn't make it into the article as an opportunity for effective snark and sarcasm is in comedy, and if you're practicing a stand-up routine. Even so, George Carlin was a very funny man, and said some great things, but he also said a lot of rude and awful things that no one would in their right mind believe or take to heart, mostly in the name of attention-getting, but never mistake his comedy for legitimate commentary.

How Can I Get Over the Summer Productivity Slump? Dear Lifehacker, The hot, hazy days of summer are really starting to drag me down at work. I'm finding it harder to get things done and stay motivated, when all I really feel like doing is leaving work early and relaxing at the pool. Is there any cure for the summertime slump? Dear Lazy, You're definitely not alone. Set the Thermostat at the Optimal Temperature for WorkingP If the temperature inside your office is too high or too low, your productivity can suffer. Other ways to tweak your environment for more productivity include making sure your office is quiet enough or perhaps playing music that helps you work.P Switch Up Your Routine or Where You WorkP If work is starting to feel a little stale, you may be able to get a kick-start simply by changing your routine or environment. If you tend to do the same things at work in a set order, consider either switching up the order or injecting a new task or activity. Try a New Productivity MethodP Work Your Best HoursP Enjoy the summer!