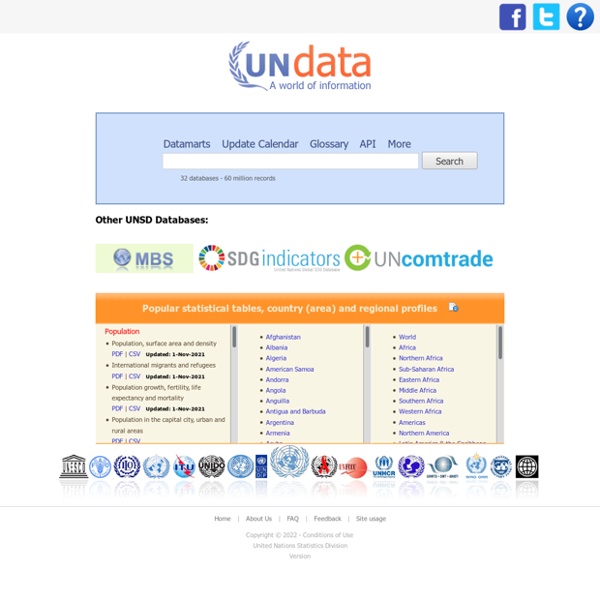 Data – CISER CISER is all about Data; finding, depositing, understanding, and working with data in a range of secure environments – whatever level of security is required by the data provider – and more. CISER Data Archive CISER has an extensive data collection with emphasis on labor, political, and social behavior, demography, economics, and health. Questionnaire design Perhaps the most important part of the survey process is the creation of questions that accurately measure the opinions, experiences and behaviors of the public. Accurate random sampling and high response rates will be wasted if the information gathered is built on a shaky foundation of ambiguous or biased questions. Creating good measures involves both writing good questions and organizing them to form the questionnaire.

World Bank Indicators This page in: Indicators Agriculture & Rural Development Aid Effectiveness Climate Change Penn World Tables 6.3 (189 countries, 1950-2007, 2005 as base year) The Penn World Table provides purchasing power parity and national income accounts converted to international prices for 189 countries for some or all of the years 1950-2007. The European Union or the OECD provide more detailed purchasing power and real product estimates for their countries and the World Bank makes current price estimates for most PWT countries at the GDP level. Please note that CHASS only provides access to the data; we are not involved in the collection or maintenance of the data. Please cite the data as follows: Alan Heston, Robert Summers and Bettina Aten, Penn World Table Version 6.3, Center for International Comparisons of Production, Income and Prices at the University of Pennsylvania, August 2009.

American National Election Studies ANES items identified as Restricted Data are not publicly released and are available only under specific contractual conditions. Access can be requested only through the application process outlined here and only for the purpose of scientific and public policy research. The ANES greatly values the trust our respondents place in us to protect their confidentiality and for this reason, we impose strict legal and electronic requirements.

Premise Data General How many countries do you operate? We’re currently in more than 30 countries across six continents. How do you decide which countries you’ll start a network in next? IUCN Red List of Threatened Species Spatial Data & Mapping Resources The IUCN Red List of Threatened Species™ contains global assessments for 105,732 species. More than 75% of these (81,323 species) have spatial data. The spatial data provided below are for comprehensively assessed taxonomic groups and selected freshwater groups. It is important to note that some species (such as those listed as Data Deficient) are not mapped and subspecies, varieties and subpopulations are mapped within the parental species. Africa Development Indicators Africa Development Indicators was a primary World Bank collection of development indicators on Africa, compiled from officially-recognized international sources. No further updates of this database are currently planned. See World Development Indicators for more recent data on Africa. TypeTime seriesPeriodicityAnnualLast Updated22-Feb-2013Economy CoverageMNA, IBRD, SSA, IDA, LMY, HICGranularityNational, RegionalNumber of Economies53TopicTrade, Urban DevelopmentUpdate FrequencyNo further updates plannedContact Detailsdata@worldbank.orgAccess OptionsAPI, Bulk download, Mobile app, Query toolAttribution/citationAfrica Development Indicators, The World BankCoverage1960 - 2012

Ranking of economies Economy Rankings Economies are ranked on their ease of doing business, from 1–190. A high ease of doing business ranking means the regulatory environment is more conducive to the starting and operation of a local firm. The rankings are determined by sorting the aggregate distance to frontier scores on 10 topics, each consisting of several indicators, giving equal weight to each topic. The rankings for all economies are benchmarked to June 2016. Read the methodology, explaining how the ease of doing business rankings and the distance to frontier measure are calculated (PDF).

Stats of the State of Maine * Rankings are from highest to lowest. ** Rates for the U.S. include the District of Columbia and (for births) U.S. territories. Refer to notes in publication tables for more detail. *** Death rates are age-adjusted. Refer to source notes below for more detail. **** State estimate is unavailable. † Excludes data for California, Hawaii, Indiana, Minnesota, and New Mexico. †† Estimates are presented for fewer than 50 states and the District of Columbia due to considerations of sample size and precision. n/a – Data not available. 2017 birth data come from National Vital Statistics Reports, Vol. 67, No. 8pdf icon; leading cause of death data, including firearm, homicide, and drug poisoning mortality data, and infant mortality data come from CDC WONDER and rankings and rates are based on 2017 age-adjusted death rates. For more information on age-adjustment, refer to this reportpdf icon.

5 Awesome Free Data Analysis Tools: Extract, Clean, and Share Your Data 05.01.2016 by Marisa Krystian Data analysis is the process of cleaning, inspecting, transforming, and modeling data in order to uncover useful information. Data analysis can be tricky! But, with these five free online tools, you’ll be able to clean up, search, share, extract, and convert data with ease. Mr.

The United Nations Statistics Division (UNSD) of the Department of Economic and Social Affairs (DESA) launched a new internet based data service for the global user community. It brings UN statistical databases within easy reach of users through a single entry point ( Users can now search and download a variety of statistical resources of the UN system. by flaing Oct 20