1611.02420. 2.1: What is a Force? - The Nature of Code. Complexity. Complex Adaptive Systems: 9 Cellular Automaton + Related Videos - Mashpedia. In this video we are going to discuss cellular automata, we will firstly talk about what they are before looking at a classical example, we will then discuss individually the different classes of patterns that cellular automata can generate before wrapping-up with a talk about their significance as a new approach to mathematical modeling. 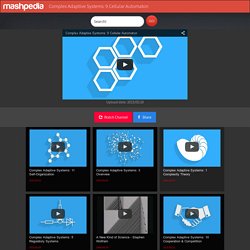 For full courses, transcriptions & downloads please see: Twitter: Facebook: Transcription Excerpt: Cellular automata are algorithmic models that use computation to iterate on very simple rules, in so doing these very simple rules can create complex emergent phenomena through the interaction between agents as they evolve over time. Web.mit.edu/esd.83/www/notebook/Complexity.PDF. This Could Be the First Animal to Live Entirely Inside a Computer. Ecco.vub.ac.be. Nodeschool.io. Functional Javascript Learn fundamental functional programming features of JavaScript in vanilla ES5. npm install -g functional-javascript-workshop Level Me Up Scotty! 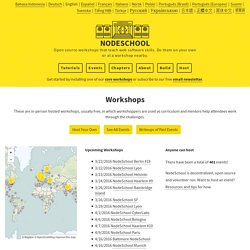 Learn to use leveldb, a simple key/value store with a vibrant package. npm install -g levelmeup ExpressWorks Learn the basics of the Express.js framework. npm install -g expressworks Make Me Hapi Learn all about hapi through a series of challenges. npm install -g makemehapi Promise It Won't Hurt Learn to use promises in JavaScript to handle async operations. Welcome to Principia Cybernetica Web. Francis Heylighen. Francis Paul Heylighen (born 1960) is a Belgian cyberneticist investigating the emergence and evolution of intelligent organization. He presently works as a research professor at the Vrije Universiteit Brussel, the Dutch-speaking Free University of Brussels, where he directs the transdisciplinary research group on "Evolution, Complexity and Cognition"[1][2] and the Global Brain Institute.

He is best known for his work on the Principia Cybernetica Project, his model of the Internet as a Global brain, and his contributions to the theories of memetics and self-organization. Biography[edit] Francis Heylighen was born on September 27, 1960 in Vilvoorde, Belgium. He received his high school education from the "Koninklijk Atheneum Pitzemburg" in Mechelen, in the section Latin-Mathematics. In 1983 he started working as a researcher for the Belgian National Fund for Scientific Research (NFWO). Work[edit] Chaos Theory: A Brief Introduction.

What exactly is chaos? The name "chaos theory" comes from the fact that the systems that the theory describes are apparently disordered, but chaos theory is really about finding the underlying order in apparently random data. When was chaos first discovered? The first true experimenter in chaos was a meteorologist, named Edward Lorenz. In 1960, he was working on the problem of weather prediction.

He had a computer set up, with a set of twelve equations to model the weather. Figure 1: Lorenz's experiment: the difference between the starting values of these curves is only .000127. When he came back an hour later, the sequence had evolved differently. By all conventional ideas of the time, it should have worked. This effect came to be known as the butterfly effect. The flapping of a single butterfly's wing today produces a tiny change in the state of the atmosphere. 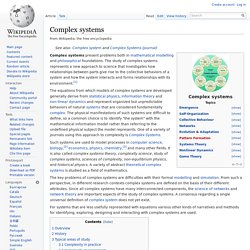 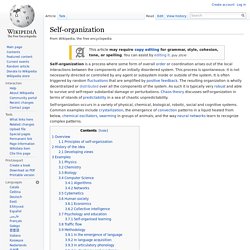 Common examples include crystallization, the emergence of convection patterns in a liquid heated from below, chemical oscillators, swarming in groups of animals, and the way neural networks learn to recognize complex patterns. Overview[edit] The most robust and unambiguous examples[1] of self-organizing systems are from the physics of non-equilibrium processes. Self-organization is also relevant in chemistry, where it has often been taken as being synonymous with self-assembly. The concept of self-organization is central to the description of biological systems, from the subcellular to the ecosystem level. Self-organization usually relies on three basic ingredients:[3] Strong dynamical non-linearity, often though not necessarily involving positive and negative feedbackBalance of exploitation and explorationMultiple interactions. Santa Fe.