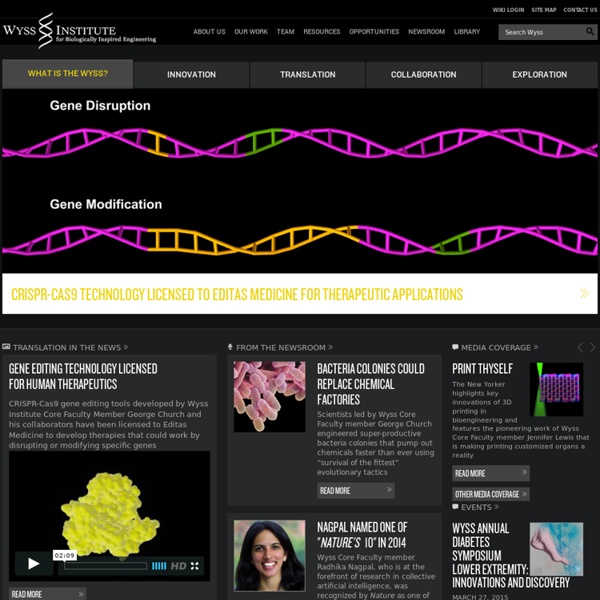 Spatial Robots: Interactive Architecture and Robotics Science Update: The Science Radio News Feature of the AAAS May 30, 2014 A biodegradable plastic isolated from shrimp shells could help curb a huge environmental problem. Podcast: Play in new window Transcript BOB HIRSHON (host): From shrimp to plastic. Plastics made from chitosan are versatile and break down quickly. Plastic waste can take decades or longer to break down, leaching toxic chemicals the whole time. DON INGBER (Wyss Institute, Harvard University): We literally took one of those clear plastic egg cartons that you may see in the supermarket, and he used that as a mold, and he made one out of this chitosan shrimp shell based plastic. HIRSHON: That suggests it could be more versatile than existing biodegradable plastics.

Proof Shattered chromosome cures woman of immune disease Call it a scientific oddity—or a medical miracle. A girl who grew up with a serious genetic immune disease was apparently cured in her 30s by one of her chromosomes shattering into pieces and reassembling. Scientists traced the woman’s improvement to the removal of a harmful gene through this scrambling of DNA in one of her blood stem cells—a recently identified phenomenon that until now had only been linked to cancer. The woman, who lives in Cincinnati, Ohio, suffered from recurring bacterial infections as a child. In 2003, researchers linked WHIM to a gene called CXCR4, which codes for a cell surface protein that immune cells use to recognize chemical messengers called chemokines. Murphy and colleagues have studied WHIM patients at the National Institutes of Health’s (NIH’s) Clinical Center to better understand the disease and develop a possible treatment with a drug that inhibits CXCR4. The woman was that first WHIM patient, now 59 years old. The NIH team began sleuthing.

PROJECTS | NSTRMNT / BRIAN HARMS | Description from Kruysman-Proto: Conventional 20th century assembly logic was questioned in favor of polymer-based meta-assemblies produced through squishing, sedimenting, embedding, and inlaying. The focus was to create mysterious and alien assemblies which do not resemble known tectonic systems. Projects avoid all types of hardware, expression of technology (although they may in fact contain it), the dogmas of frames and panels, and other 20th century forms of reductive subdivision. Instead, the freeform and figural potentials of polymer and composite construction was exploited in search of new aesthetic and performative territories. Underwriting this desire is the idea of multi-materiality, where the homogeneity of digital surfaces is replaced with complex depth, sectional, and compositional effects. Critical for the ongoing research project of SQUISHED! Project Credits: Alberto Alfonso, Brian Harms, Haejun Jung, Al Ataide, Cheng Gong

Black Phosphorous: The Birth of a New Wonder Material In the last few years, two-dimensional crystals have emerged as some of the most exciting new materials to play with. Consequently, materials scientists have been falling over themselves to discover the extraordinary properties of graphene, boron nitride, molybdenum disulphide, and so on. A late-comer to this group is black phosphorus, in which phosphorus atoms join together to form a two-dimensional puckered sheet. Last year, researchers built a field-effect transistor out of black phosphorus and showed that it performed remarkably well. But there is a problem. These guys have perfected a way of making large quantities of black phosphorus nanosheets with dimensions that they can control. In bulk form, black phosphorus is made of many layers, like graphite. So Hanlon and co have been toying with another approach. The result is that the bulk mass separates into a large number of nanosheets that the team filters for size using a centrifuge.

Where Science And Art Collide This is a guest post by Susana Simões Pereira. Have you ever heard of using dance to study science, as, for instance, cells movements? Well, John Bohannon has. Actually, he recently presented his “Dance Your PhD” project at TEDxBrussels, which aims to use dance as a way to study and communicate science efficiently. But using art as a mean to communicate science to scientists and non-scientists, kids and adults, is the intent of some other interesting projects like “The love motel for Insects” at NYC. This project, “brought to life” by Brandon Ballengée, allows people to contact and learn about arthropods lives while enjoying themselves. Another kind of SciArt project is developed by Luke Jerram. These are some of many examples that show learning science can be indeed fun and take place in very different contexts from the ones we’re used to. Susana Simões Pereira is a Portuguese mathematician and PhD student in Science Communication.

Cluster | City - Design - Innovation Research team edits the DNA of fertilized human embryos For several weeks, rumors have been circulating that a research group in China had performed the first targeted editing of DNA in human embryos. Today, the rumors were confirmed by the appearance of a paper in the journal Protein & Cell, describing genome editing performed at Sun Yat-sen University in Guangzhou, China. The paper shows that while the technique can work, it doesn't work very efficiently, suggesting there are a lot of hurdles between existing techniques and widespread genetic engineering of humanity. To avoid potential ethical issues, the researchers performed their experiments with embryos that had been fertilized by more than one sperm. While these are regular occurrences in in vitro fertilization procedures, the embryos are inviable and normally discarded. The work relied on the CRISPR-Cas9 system. This has worked in a variety of systems, and the authors confirmed that it works with their gene of choice: the hemoglobin component β-globin.