3D Models of the Human Anatomy 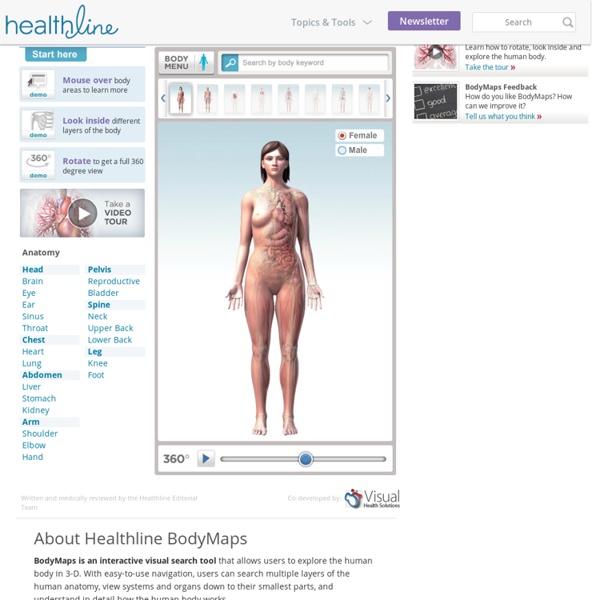 Muscular System Anatomy, Diagram & Function Without muscle, humans could not live. The primary job of muscle is to move the bones of the skeleton, but muscles also enable the heart to beat and constitute the walls of other important hollow organs. There are three types of muscle tissue: Skeletal muscle: This type of muscle creates movement in the body.

Journomarketing of Neurobollocks Are you one of the few Anglophones who haven't yet heard about the frightening new fields of neuromarketing and neuroeconomics? Or that pop neuroscience is popular? Well thank god we have Steven Poole to set us straight! Your brain on pseudoscience: the rise of popular neurobollocksThe “neuroscience” shelves in bookshops are groaning. But are the works of authors such as Malcolm Gladwell and Jonah Lehrer just self-help books dressed up in a lab coat? By Steven PoolePublished 06 September 2012An intellectual pestilence is upon us. Approves First Scorpion Sting Antidote Get Consumer Updates by E-mail Consumer Updates RSS Feed Share copies of this article (623 KB) On This Page:

How plants work - Science (4) - ABC Splash - Overview Plants are the only living things that can make their own food. They do this during the day while it's light, using a process called photosynthesis, which uses carbon dioxide and produces oxygen. During the day and night plants take in oxygen and release carbon dioxide through respiration. ld fusion: smoke and mirrors, or raising a head of steam? A lot has been happening in the world of cold fusion, or Low Energy Nuclear Reactions (LENR) since our last update. Andrea Rossi, who claims to have a working commercial cold fusion reactor, finally released a report with seemingly independent scientific confirmation of the reaction in his device. This was quickly followed by news of a major investor dropping out because of a failed test.

The Biology Project: Cell Biology en español Cell Membranes Learn that membranes are fluid, with components that move, change, and perform vital physiological roles as they allow cells to communicate with each other and their environment. Cell Signaling Learn that living organisms constantly receive and interpret signals from their environment. Cells of multi-cellular organisms also receive signals from other cells, including signals for cell division and differentiation. Studying Cells Introduce yourself to the cell as the fundamental unit of life and the scientific method. The Cell Cycle & Mitosis Understand the events that occur in the cell cycle and the process of mitosis that divides the duplicated genetic material creating two identical daughter cells.

Meiosis: An Interactive Animation Diploid Cell (2N): From a preceding mitotic division, the Oogonium (Spermatogonium) enters meiosis with DIPLOID (2N) chromosomes but TETRAPLOID (4N) DNA. Chromosomes then duplicate to produce SISTER CHROMATIDS (or HOMOLOGOUS DYADS). Prophase I: Dyad pairs align to create "TETRADS", non-sister chromatids connect and trade sections at a "CHIASMA", a process called "CROSSING OVER". Metaphase I: SPINDLE FIBERS attach to each dyad at the KINETOCHORE. Tension from spindle fibers aligns the tetrads at the cell equator. Fighting infection with vaccines - Science (9) - ABC Splash - Overview Explore historical and modern efforts to battle human infectious diseases. Watch re-enactments of the experiments of Edward Jenner, who pioneered vaccination, and of Louis Pasteur's work showing how microbes cause infection. Peer down the microscope to see the microbial world that wreaks havoc on human health. Learn about the work of an Australian team developing a vaccine against the diarrhoea. 13 mins 46 secs

3D Models of the Human Anatomy Different organs can work together to perform a common function, like how the parts of your digestive system break down food. We refer to an integrated unit as an organ system. Groups of organ systems work together to make complete, functional organisms, like us! There are 11 major organ systems in the human body. The circulatory system is a body-wide network of blood, blood vessels, and lymph.