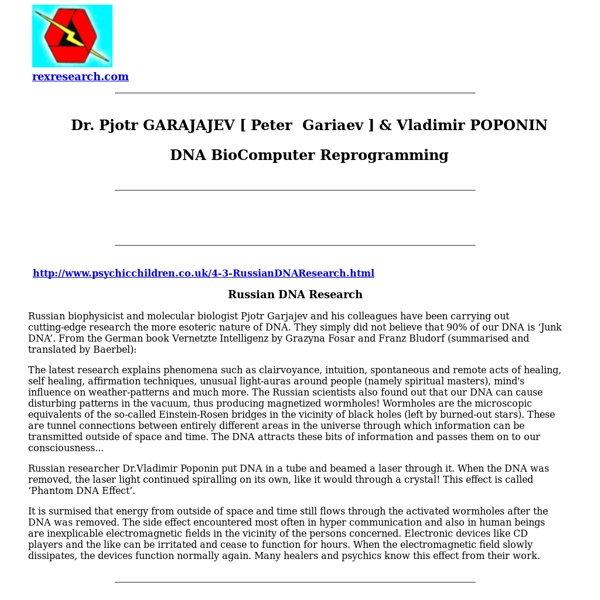 DNA As Conductor Telex External Link Internal Link Inventory CacheDNA As ConductorThis nOde last updated December 8th, 2001 and is permanently morphing...(3 Muluc (Water) / 7 Mak - 12.19.8.14.9) Double Helix Does Chemistry at a Distance-But How? DNA double helix. DNA as conducting wire instead of insulator What seems to occur is flow of electron current along DNA with very small resistance. quantum tunneling between adjacent building units of DNA and it should diminish exponentially with distance. There exist a theory which assumes that the current could flow along the interior of double DNA, that is the region between the bases of strand and complementary strand. 604 track _Cynabs_ MP3 by Orion off of _Trance Central Vol. 8_ on Kickin (2000) sample: "This direct contact from drug and receptor causes massive electrical activity TGD (Topological Geometrodynamics) suggests a possible explanation of phenomenon in terms of closely related concepts of exotic atom and charged wormhole. electric current can

Double Helix Telex External Link Internal Link Inventory Cache Double Helix This nOde last updated November 27th, 2004 and is permanently morphing. double helix noun The coiled structure of double-stranded DNA in which strands linked by hydrogen bonds form a spiral configuration. 604 track _Double Helix_ MP3 by Digitalis off of _All Boundaries Are Illusion_compilation CD from 21-3 604 track _Triple Helix_ MP3 by Planet B.E.N. and Spiralkinda samples: "A person from another planet might disagree with you" - from the film _The Day The Earth Stood Still_ (vhs/ntsc) ; "Earth, biosphere. My investigation had led me to formulate the following working hypothesis: In their visions, shamans take their consciousness down to the molecular level and gain access to information related to DNA, which they call "animate essences" or "spirits." Like the axis mundi of shamanic traditions, DNA has the form of a information. photons, which are electromagnetic photons of biological origin, or "biophotons." Jeremy Narby - The DNA.

genetic-programming.org The Biological Chip in our Cells by Grazyna Fosar and Franz Bludorf Light is in principle the oldest and most important food of the world, and still in addition - understood as electromagnetic wave - a perfect storage medium. We know today that life in the universe is a process which is always swiming against the river. The universe favours disorder and decay rather than order and structure. In such an environment an organism can temporarily exist only because it constantly supplies new order structures to its body using energy , briefly said: by taking up food regularly. For this the plants found the simplest and most direct way. The animals and humans however have a metabolism which is based not on chlorophyll, but on haemoglobin, the red blood coloring material. Light nevertheless plays a crucial role for animal and human life too. German bio physicist Fritz Albert Popp investigates for years the phenomenon of biophotons, a natural light radiation, which is emitted from each living organism. This is actual the case.

Scientists Prove DNA Can Be Reprogrammed by Words and Frequencies By Grazyna Fosar and Franz Bludorf THE HUMAN DNA IS A BIOLOGICAL INTERNET and superior in many aspects to the artificial one. Russian scientific research directly or indirectly explains phenomena such as clairvoyance, intuition, spontaneous and remote acts of healing, self healing, affirmation techniques, unusual light/auras around people (namely spiritual masters), mind’s influence on weather patterns and much more. In addition, there is evidence for a whole new type of medicine in which DNA can be influenced and reprogrammed by words and frequencies WITHOUT cutting out and replacing single genes. Only 10% of our DNA is being used for building proteins. It is this subset of DNA that is of interest to western researchers and is being examined and categorized. The Russian biophysicist and molecular biologist Pjotr Garjajev and his colleagues also explored the vibrational behavior of the DNA. One can simply use words and sentences of the human language! References:

Behavioral Disorders in Children from Cellphone Use During Pregnancy Moms-to-be might want to add a little distance between their unborn children and cell phones. The Yale School of Medicine released a study on the effect of radiofrequency radiation on fetal mice this week. Researchers concluded that it would be “sensible” for pregnant women to limit babies’ exposure to all wireless devices, as simply using the devices could help lead to behavioral disorders in children. Behavioral Disorders in Children, ADHD and Unborn Mice “This is the first experimental evidence that fetal exposure to radiofrequency radiation from cellular telephones does in fact affect adult behavior,” said Dr. For the experiment, Taylor and other researchers placed a silenced cell phone above the cage of pregnant mice for all 19 days of gestation. “The rise in behavioral disorders in human children may be in part due to fetal cellular telephone irradiation exposure,” Taylor concluded, though admitting more research was needed. Differences in Mice and Men More Studies Needed Yale News

Does DNA Emit Light? Dan Eden for viewzone.com An incredible story! I get lots of suggestions for stories, and I really appreciate them. But some of them are too good to be true. An example of this was a story of a giant human skeleton -- maybe 40 feet tall -- that was discovered by a Russian archaeological team. I had this same experience this week when I was sent an article where a Russian (again) scientist, Pjotr Garjajev, had managed to intercept communication from a DNA molecule in the form of ultraviolet photons -- light! But this was just the beginning. Dr. I tried to find a scientific journal that had this experiment. Fritz-Albert Popp thought he had discovered a cure for cancer. It was 1970, and Popp, a theoretical biophysicist at the University of Marburg in Germany, had been teaching radiology -- the interaction of electromagnetic (EM) radiation on biological systems. Why Ultra-violet light? [Above] All vibrations of energy are part of the electro-magnetic spectrum. Photorepair Light inside the body

Junk DNA" - Over 98 percent of DNA has largely unknown function By Jaan Suurkula M.D. Presently, only the function of a few percent of the DNA is known, the rest has been believed to be "junk". The most exhaustive knowledge is about the genes responsible for the bodily structures, the structural genes, which are the simplest part of the system. But the knowledge about the most important part of this system, the regulator genes, is incomplete. The genetic code language of these genes is only partially known. More than 98 percent of all DNA, was called "Junk DNA" by molecular biologists, because they were unable to ascribe any function to it. However it has been found that the sequence of the syllables is not random at all and has a striking resemblance with the structure of human language (ref. It has been reported that the sequences of this unknown DNA are inherited and that some repetitive patterns in it seem to be associated with increased risk for cancer. Published at this website in May 1997. Recent studies Conclusion