Magic Mushrooms may have Cure for Depression 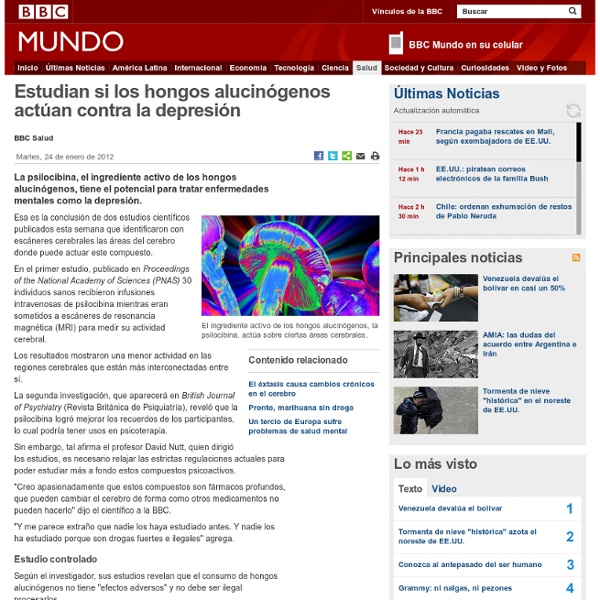 Basidiospore Basidiomycetes form sexual spores externally from a structure called a basidium. Four basidiospores develop on appendages from each basidium. These spores serve as the main air dispersal units for the fungi. The spores are released during periods of high humidity and generally have a night-time or pre-dawn peak concentration in the atmosphere. When basidiospores encounter a favorable substrate, they may germinate, typically by forming hyphae. These hyphae grow outward from the original spore, forming an expanding circle of mycelium. General structure and shape[edit] Basidiospores are generally characterized by an attachment peg (called a hilar appendage) on its surface. Potential opportunist and Pathogen: Depend on genus. Industrial uses: Edible mushrooms are used in the food industry. Potential Toxins produced: Amanitins, monomethyl-hydrazine, muscarine, ibotenic acid, psilocybin. Basidiospores are the result of sexual reproduction and formed on a structure called the basidium.

Rainy season brings glow-in-the-dark mushrooms 24 May 2006 With the arrival of Japan's rainy season, a mysterious type of green, glow-in-the-dark mushroom begins to sprout in Wakayama prefecture. The Mycena lux-coeli mushrooms, known locally as shii no tomobishi-dake (literally, "chinquapin glow mushrooms"), sprout from fallen chinquapin trees. As they grow, a chemical reaction involving luciferin (a light-emitting pigment contained within the mushrooms) occurs, causing them to glow a ghostly green. The luminescent mushrooms were long believed to be indigenous solely to Tokyo's Hachijojima Island after they were discovered there in the early 1950s. The mushrooms thrive in humid environments, popping up during Japan's rainy season, which typically lasts from the end of May to July. [Source: Mainichi Shimbun]

Basidium Schematic showing a basidiomycete mushroom, gill structure, and spore-bearing basidia on the gill margins. A basidium (pl., basidia) is a microscopic, spore-producing structure found on the hymenophore of fruiting bodies of basidiomycete fungi. The presence of basidia is one of the main characteristic features of the Basidiomycota. Basidium structure[edit] Mechanism of basidiospore discharge[edit] In most basidiomycetes, the basidiospores are ballistospores--they are forcibly discharged. Upon maturity of a basidiospore, sugars present in the cell wall begin to serve as condensation loci for water vapor in the air. Successful basidiospore discharge can only occur when there is sufficient water vapor available to condense on the spore. Evolutionary loss of forcible discharge[edit] Some basidiomycetes lack forcible discharge, although they still form basidiospores. References[edit] Ingold, C.T. 1998. External links[edit]

Drawings on LSD These drawings were done as part of a CIA experiment aimed at determining the effects of LSD on the human body. The drawings are incredibly fascinating, particularly due to the progression of style that occurs throughout the experiment. They administered 100ul of LSD to the artist and gave the artist free access to an activity box full of crayons. His subject was the medical assistant who administered the LSD. 1. 2. 3. 4. 5. 6. 7. 8. 9. Fin. I particularly enjoy how from minutes 150 – 155 his drawings become far worse, then all of a sudden he is amazing. What are your thoughts? Basidiocarp Schematic of a typical basidiocarp, showing fruiting body, hymenium and basidia Structure[edit] Types[edit] Basidiocarps of Ramaria rugosa, a coral fungus Basidiocarps are classified into various types of growth forms based on the degree of differentiation into a stipe, pileus, and hymenophore, as well as the type of hymenophore, if present. Growth forms include: Basic divisions of Agaricomycotina were formerly based entirely upon the growth form of the mushroom. See also[edit] Ascocarp External links[edit] Evolution & Morphology in the Homobasidiomycetes: The Clade/Morphology Chart by Gary Lincoff & Michael Wood, MykoWeb, November 27, 2005."

How To Get High Off Nutmeg Ever since recent news reports, many have been asking how to get high off nutmeg . This trend is not new, hippies were doing it back around 40 years ago. They stopped because the cons outweighed the pros and the spice proved to be an unpleasant experience for the most part. Thanks to mainstream media the fad is back, and kids all over the country have been using nutmeg to get high again. How long will it last, we don’t know but parents should definitely warn their kids of the dangers of a nutmeg overdose. Image via Wikipedia The following steps will surely assist you in getting high off nutmeg. An overdose of nutmeg can cause death or serious health problems resulting in hospitalization Preparatory Steps: 1. 3. I give you these steps hoping you will not get high on nutmeg. The effects don’t start to come on until about 4 hours after ingestion. Make sure to head over to the nutmeg experience afterward.

Conidium Conidia on conidiophores Conidia, sometimes termed asexual chlamydospores, or chlamydoconida [1] are asexual,[2] non-motile spores of a fungus and are named after the Greek word for dust, skoni. They are also called mitospores due to the way they are generated through the cellular process of mitosis. Asexual reproduction in Ascomycetes (the Phylum Ascomycota) is by the formation of conidia, which are borne on specialized stalks called conidiophores. The terms "microconidia" and "macroconidia" are sometimes used.[3] Conidiogenesis[edit] There are two main types of conidium development:[4] Blastic conidiogenesis, where the spore is already evident before it separates from the conidiogenic hypha which is giving rise to it, andThallic conidiogenesis, where first a cross-wall appears and thus the created cell develops into a spore. Conidia germination[edit] A conidium may form germ tubes (germination tubes) and/or conidial anastomosis tubes (CATs) in specific conditions. Health issues[edit]

The Most Addictive Drugs in the World Many people think that heroin is the most addictive drug in the world. The truth is, that although heroin is one of the most dangerous drugs in the world, it is NOT the most addictive. You may be surprised to learn that some of the drugs the experts have found to be most addictive are actually legal. The most addictive drugs Nicotine. Although studies vary, it is generally believed that over 30% of those individuals who use nicotine for a period of time become addicted. Caffeine. Heroin. Cocaine. Alcohol. For the most part, those with alcohol and drug addiction are unlikely to admit, on their own, that they have a problem. Obviously, some of the substances listed above are more dangerous than others. At Michael’s House, we treat individuals who have seen their life take a wrong turn as a result of drug addiction. For addiction treatment that gets real results, contact Michael’s House today.

Bat-Killing Fungus Spreads West Researchers have detected the fungus responsible for white-nose syndrome, which decimates bat populations, in Arkansas. A little brown bat with white-nose syndrome in Greeley Mine, VermontWIKIMEDIA, US FISH AND WILFLIFE SERVICEThe fungus that causes white-nose syndrome (WNS), a disease that has already killed millions of bats in the United States, has been detected as far west as Arkansas, reported BBC News. The fungus, Geomyces destructans, was found in two caves in the state, but so far there is no sign of the disease in the bat population. “These are pretty far west occurrences,” Ann Froschauer of the US Fish and Wildlife Service told the BBC. “We do have one potential site further west in western Oklahoma, but these latest cases are the most western confirmed cases to date.” WNS was first discovered in a cave in New York State in 2006 and has since swept through 22 other states and five Canadian provinces, killing almost 7 million bats along the way.

Chytridiomycota Life cycle & body plan[edit] Brief taxonomic history[edit] Habitats[edit] Ecological functions[edit] Batrachochytrium dendrobatidis[edit] The chytrid Batrachochytrium dendrobatidis is responsible for chytridiomycosis, a disease of amphibians. Other parasites[edit] Chytrids mainly infect algae and other eukaryotic and prokaryotic microbes. Saprobes[edit] Arguably, the most important ecological function chytrids perform is decomposition.[9] These ubiquitous and cosmopolitan organisms are responsible for decomposition of refractory materials, such as pollen, cellulose, chitin, and keratin.[3][9] There are also chytrids that live and grow on pollen by attaching threadlike structures, the called rhizoids, onto the pollen grains.[21] This mostly occurs during asexual reproduction because the zoospores that become attached to the pollen continuously reproduce and form new chytrids that will attach to other pollen grains for nutrients. Fossil record[edit] In fictional media[edit] References[edit]