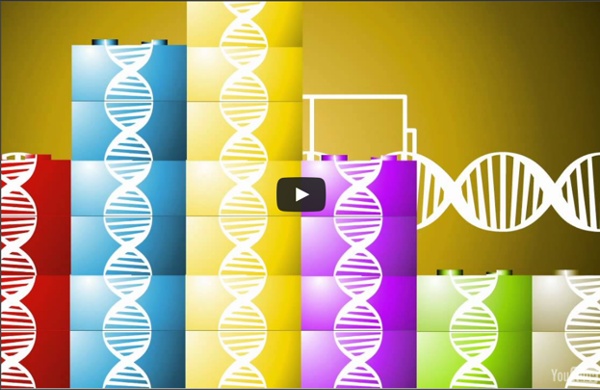 Inventing life: patent law and synthetic biology With promises of improved medical treatments, greener energy and even artificial life, the field of synthetic biology has captured the public imagination and attracted significant government and commercial investment. This excitement reached a crescendo on 21 May 2010, when scientists at the J Craig Venter Institute in the United States announced that they had made a “self-replicating synthetic bacterial cell”. This was the first living cell to have an entirely human-made genome, which means that all of the cell’s characteristics were controlled by a DNA sequence designed by scientists. This achievement in biological engineering was made possible by combining molecular biotechnology, gene synthesis technology and information technology. Possibilities of synthetic biology In his autobiography, A Life Decoded, J.

Making Science Visible Biologists Have Built An Artificial Chromosome From Scratch The new chromosome, called SynIII, involved the design and creation of 273,871 base pairs of DNA — fewer than the 316,667 pairs in the original chromosome. That's over 50,000 modifications! Nit pick: Over 50,000 fewer base pairs does not mean 50,000 modifications, they're considering each base pair on a case-by-case basis, they look at what each segment is (a gene that codes for a certain protein, etc) and then remove it as a segment, that sounds more like maybe 100 modifications, each on average about 500 base pairs being removed. I am curious if this means we've got the basic means to construct something like Smallpox from scratch. :O Considering it is designed to take over the cell it is in and make copies (admittedly with the help of proteins) it seems like a reasonable concern.

"Public Interest" Groups Call for Synthetic Biology Regulation By Kevin E. Noonan -- A broad coalition of 111 public interest groups announced today a manifesto for containing "synthetic biology," a term with a loose definition (including "extreme genetic engineering") that includes efforts such as Craig Venter's to produce novel microorganisms to more traditional biotechnology efforts in transgenic plants and animals and other genetically modified organisms (see "Not Quite Artificial Life, But We're Getting Closer: Reactions to Venter's Synthetic Cell").

Grand Challenges in Synthetic Biology to be Accomplished When engineering science meets biological science, synthetic biology is created. Over the past half century, systems engineering has seen numerous successful applications in the engineering field such as manufacturing, electronics, telecommunications, computer, and networks, etc. At the same time, biological systems have been dealt in a reductionist way which resulted in accumulation of numerous but relatively fragmented biological information on genes and proteins, and their interactions. Legal Issues in Synthetic Biology In their monthly column, Carlos María Romeo Casabona and Iñigo de Miguel Beriain, take a look at the legal issues in synthetic biology. New opinion on IP! The Opinion of the General Advocate of the European Court of Justice, in relation with the case delivered on 10 March 2011, has been published. Its final conclusion is this:

Development of an artificial cell, from self-organization to computation and self-reproduction Author Affiliations Contributed by Albert Libchaber, November 22, 2010 (sent for review October 13, 2010) Abstract DARPA: We Are Engineering the Organisms That Will Terraform Mars Terraformed Mars, artist's conception. Image: Daein Ballard/Wikimedia Commons It’s no secret that the Defense Advanced Research Projects Agency is investing heavily in genetic engineering and synthetic biology. Whether that excites or terrifies you depends on how you feel about the military engineering totally new life forms. First synthetic model of a bacterial outer membrane will support antibiotic development For the first time researchers from Newcastle University and the Science and Technology Facilities Council have produced a working model giving access to unprecedented information about the bacteria which is notoriously hard to study due to its size and complex exterior. The results, published in the leading chemistry journal Angewandte Chemie International Edition, are featured as a 'Research Highlight' in Nature Chemical Biology. (20 October 2015). It is well known that all types of disease-causing bacteria are becoming resistant to antibiotics but single-celled Gram-negatives, the group of bacteria that E. coli belongs to, are of special concern because they have an extra wall around their cells which can protect them physically from our treatments. 2013 figures taken from the NHS website show one in five infections involving E. coli is now resistant to a commonly-used antibiotic (ciproflaxin). Gram-negative bacteria are highly successful organisms. More information: Luke A.

An Accurate In Vitro Model of the E. coli Envelope - Clifton - 2015 - Angewandte Chemie International Edition Communication You have full text access to this OnlineOpen article Dr. Luke A.