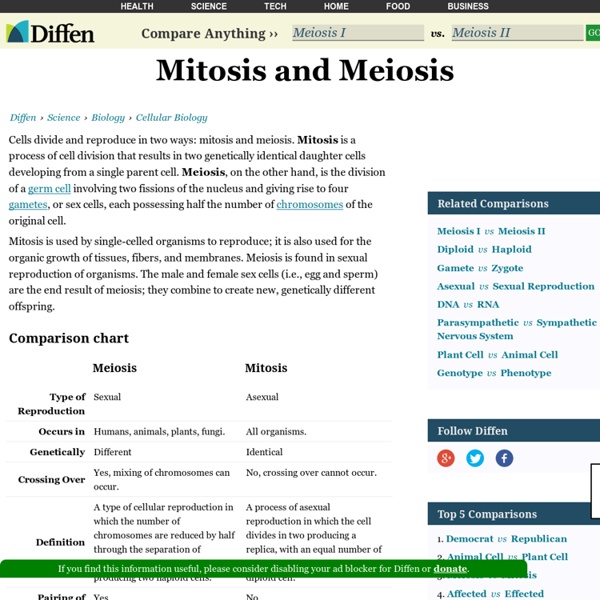 Cells divide and reproduce in two ways: mitosis and meiosis. Mitosis is a process of cell division that results in two genetically identical daughter cells developing from a single parent cell. Meiosis, on the other hand, is the division of a germ cell involving two fissions of the nucleus and giving rise to four gametes, or sex cells, each possessing half the number of chromosomes of the original cell. Mitosis is used by single-celled organisms to reproduce; it is also used for the organic growth of tissues, fibers, and membranes. Differences in Purpose Though both types of cell division are found in many animals, plants, and fungi, mitosis is more common than meiosis and has a wider variety of functions. Meiosis is a more specific type of cell division (of germ cells, in particular) that results in gametes, either eggs or sperm, that contain half of the chromosomes found in a parent cell. A diagram showing the differences between meiosis and mitosis. Meiosis and Genetic Diversity

Sex Cells Sex cells are also called gametes. The gametes are the sperm and the egg; the more scientific terms for these cells are the spermatozoa and ova, respectively. These cells are made only in gonads, and they are made by a type of cell division that doesn't occur anywhere else in the body-- meiosis. You have probably learned about meiosis in a previous class, but I will review it a little bit here... Meiosis, on the other hand, is only used for making gametes! The second reason that we have to use meiosis is because we need our spermatozoa and ova to contain only half of the normal amount of genetic information. Meiosis begins with one cell, called a germ cell (because it specifically makes gametes). Our cells have two copies of every type of chromosome. Use the diagram to follow the description in the next paragraph. Before our germ cells undergo meiosis, they proceed through DNA replication, during which every chromosome is copied.

What is a gene mutation and how do mutations occur? A gene mutation is a permanent alteration in the DNA sequence that makes up a gene, such that the sequence differs from what is found in most people. Mutations range in size; they can affect anywhere from a single DNA building block (base pair) to a large segment of a chromosome that includes multiple genes. Gene mutations can be classified in two major ways: Hereditary mutations are inherited from a parent and are present throughout a person’s life in virtually every cell in the body. These mutations are also called germline mutations because they are present in the parent’s egg or sperm cells, which are also called germ cells. When an egg and a sperm cell unite, the resulting fertilized egg cell receives DNA from both parents. Genetic changes that are described as de novo (new) mutations can be either hereditary or somatic. Somatic mutations that happen in a single cell early in embryonic development can lead to a situation called mosaicism.