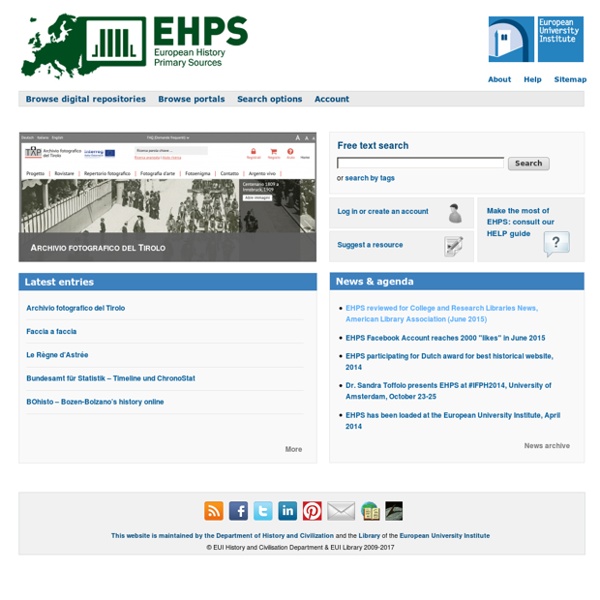 Primary Sources for the Humanities: Europe & UK Check the A-Z list of Primary Sources for additional resources. If you need help, please contact Rebecca Dowson, Liaison Librarian: English Literature and History at 778.782.4304 or rda26@sfu.ca or Ask a librarian. This digital library contains some of the core printed primary and secondary sources for the medieval and modern history of the British Isles. American History Best U.S. History Web Sites Library of Congress An outstanding and invaluable site for American history and general studies. Contains primary and secondary documents, exhibits, map collections, prints and photographs, sound recordings and motion pictures. H-Soz-Kult. Kommunikation und Fachinformation für die Geschichtswissenschaften CFP: Main Session M-POL-2 at the European Association of Urban History (EAUH) conference, Antwerp, 2–5 September 2020 Struggles for the City: Toward a History of Urban Social Movements (1800–present) We are looking for papers to join us in working towards a history of urban (social) movements during a three-hour session. Historians have recently turned their attention to the numerous urban struggles that erupted in the aftermath of the rebellious 1960s. In doing so, they offered important insights into the emergence of urban social movements. In particular, they showed that urban experiences, urban aesthetics, and urban space became central concerns for a young generation of social movements that began to forge new collective identities.

DMMapp - Digitized Medieval Manuscripts App What is the DMMapp? The DMMapp is an open source app that links to digital repositories containing digitized western medieval manuscripts from all over the world. Finding digitized repositories can be difficult, and we want to create a central hub that can help medievalists, codicologists, and enthusiasts to find the medieval manuscripts they are searching for. Who made the DMMapp? Book Series: The Other Voice in Early Modern Europe Originally founded by series editors Margaret King and Albert Rabil and the Press in 1993 as a modest proposal to make available in English translation perhaps a dozen key texts by women writers who contributed to the development of humanism during the European Renaissance (ca. 1300-1800), the Other Voice in Early Modern Europe series began publishing books in 1996. After the first half-dozen books were published, it soon became clear that the mission of the series had grown into the larger ambition of the textual recovery, not just of works by or about women that called for gender equality and equal education, but other important works, many quite popular in their day, from many different disciplines and genres, including religious history and devotional writing, economic equality and female autonomy essays, anatomy and medical treatises, philosophical and scientific works, and imaginative literature (including memoir, fiction, drama, and lyric and epic poetry).

H-Soz-Kult. Kommunikation und Fachinformation für die Geschichtswissenschaften Youth Mobilisation and Political ChangeParticipation, values, policies and discourses between East and West 28-29 November 2019 Félix Krawatzek Centre for East European and International Studies - Mohrenstr. 60 - 10117 Berlin Institute for Medieval Studies Select a link from the menu below to be taken to Web resources for that area. Please direct suggestions for other links to be listed here to Axel Müller. Chronological Periods Late Antiquity Ammianus Marcellinus Online Project This site introduces Ammianus and his work by means of a biography, short essays on important persons as well as aspects of his work, and a bibliography of important and recent publications.

The French Revolution The webserver at Alpha History tells us you’re using an adblocking tool, plug-in or browser extension on your computer or network. We understand that many people don’t like web-based advertising. Ads on websites can often be irrelevant, distracting and ‘in your face’. Without ads, however, our website would not exist – or it would not be free.