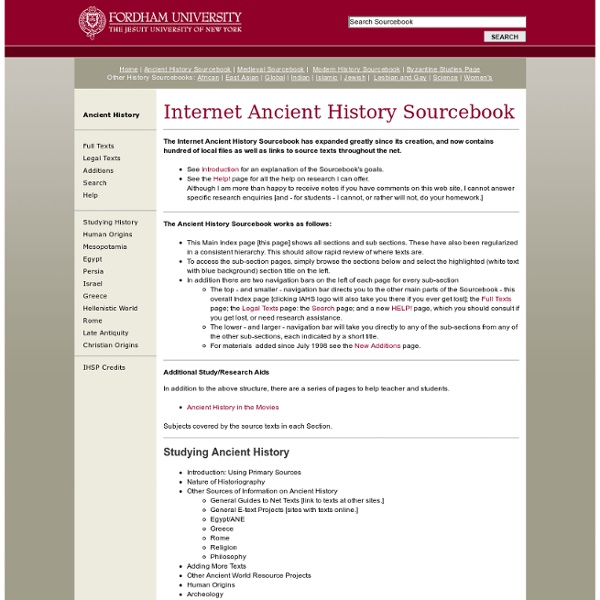 Internet Ancient History Sourcebook The Internet Ancient History Sourcebook has expanded greatly since its creation, and now contains hundred of local files as well as links to source texts throughout the net. See Introduction for an explanation of the Sourcebook's goals. See the Help! page for all the help on research I can offer. Although I am more than happy to receive notes if you have comments on this web site, I cannot answer specific research enquiries [and - for students - I cannot, or rather will not, do your homework.] The Ancient History Sourcebook works as follows: This Main Index page [this page] shows all sections and sub sections. Additional Study/Research Aids In addition to the above structure, there are a series of pages to help teacher and students. Ancient History in the Movies Subjects covered by the source texts in each Section. Studying Ancient History The Ancient Near East Mesopotamia Egypt Persia Israel Greek Civilizations Greece The Hellenistic World Introduction

Internet History Sourcebooks Update Information 2006: In 2006 the Internet Medieval Sourcebooks and associated sourcebooks are undergoing a major overhaul to remove bad links and add more documents. 1. This project is both very large and fairly old in Internet terms. At the time it was instigated (1996), it was not clear that web sites [and the documents made available there] would often turn out to be transient. As a result there is a process called "link rot" - which means that a "broken link" is a result of someone having taken down a web page. In some cases some websites have simply reorganized sub-directories without creating forwarding links. Ancient Civilizations To borrow from Dr. Seuss's book title, "Oh the Places You'll Go! Here's a coming attraction of the people, places, ideas, and things coming at you: Your 3.2 million-year-old human ancestor Lucy, mummies, pyramids, Cleopatra, "an eye for an eye", the birth of major religions Judaism, Christianity, Islam, Hinduism, and Buddhism, the birth of democracy, the first Olympics, Julius Caesar, gladiators, the invention of writing, paper, and the wheel, kingdoms built of stone in Africa, the Great Wall of China, the introduction of such concepts as zero, time, and monotheism (the belief in one god), Samurai, martial arts, palaces of gold, and even the Sphinx. Whew!

Darwin's Reading Reading was a fundamental tool in Darwin’s scientific practice. He read widely in the scientific literature of natural history, he also copiously annotated many books and articles and he systematically abstracted many of his annotations. Since a big part of his strategy for supporting the theory of evolution relied on his ability to translate the biological problems of his day into evolutionary terms, the documentary record of his Darwin’s reading cuts across the topical structure of the Darwin archive.

Ancient Civilizations - Dynamic 2 Moms To be ignorant of the past is to remain a child. (paraphrase from an observation by Cicero ) History is one of our very favorite subjects. Primary Source Sets Teachers Abraham Lincoln: Rise to National Prominence Speeches, correspondence, campaign materials and a map documenting the free and slave states in 1856 chronicle Lincoln’s rise to national prominence Alexander Hamilton Manuscripts, images, and historic newspapers document the life and accomplishments of Alexander Hamilton American Authors in the Nineteenth Century: Whitman, Dickinson, Longfellow, Stowe, and Poe A selection of Library of Congress primary sources exploring the topic of American authors in the nineteenth century, including Walt Whitman, Emily Dickinson, Henry Wadsworth Longfellow, Harriet Beecher Stowe, and Edgar Allan Poe. Top

Welcome...to the Renaissance As of July 1, 2013 ThinkQuest has been discontinued. We would like to thank everyone for being a part of the ThinkQuest global community: Students - For your limitless creativity and innovation, which inspires us all. The World Wide Web project The WorldWideWeb (W3) is a wide-area hypermedia information retrieval initiative aiming to give universal access to a large universe of documents. Everything there is online about W3 is linked directly or indirectly to this document, including an executive summary of the project, Mailing lists , Policy , November's W3 news , Frequently Asked Questions . What's out there? Pointers to the world's online information, subjects , W3 servers, etc. Help on the browser you are using

Landmarks of the Faith Christian Adventures in Living History...Listen to out Podcasts Our podcast "Turning Points in History" offers a Christ-centered look at history, examining pivotal moments and periods that shaped the world we live in. Join us each month for a new episode as we explore such topics as the Battle of Hastings, the invention that may have caused the civil war, and the Scottish Reformation. (Note: iTunes MUST be installed on your device for the above button to work.)

JCS Online Resources The acclaimed Churchill Archive is now free for the first time to schools worldwide thanks to a $1 million donation from philanthropist Laurence Geller CBE. "All children should understand Sir Winston Churchill’s fundamental place in our nation’s history,” says the Rt Hon Nicky Morgan MP, Secretary of State for Education and Minister for Women and Equalities, "and schools can now seize the opportunity to access the Churchill Archive – a tremendous cache of documents that bring history to life.” Opening up exciting new opportunities for the teaching and learning of History at secondary level, the Churchill Archive - described by History Today as "the real gem of online Churchill resources" - offers cross-searchable online access to over 800,000 original documents.

Ancient African Kingdoms Web Quest - GlobalVillage Webquest: Ancient West African Kingdoms Introduction You and a team of explorers have the opportunity to explore one of the following African kingdoms - Ghana, Mali, and Songhai. Your group will investigate the kingdom using the Internet. In this WebQuest, you will use the power of teamwork and the resources of the Internet to learn all about one of these African kingdoms. Each explorer on your team will be responsible for examining one aspect of the kingdom. Public Domain Collections: Free to Share & Reuse That means everyone has the freedom to enjoy and reuse these materials in almost limitless ways. The Library now makes it possible to download such items in the highest resolution available directly from the Digital Collections website. Search Digital Collections

Early world maps Antiquity Babylonian Imago Mundi (c. 600 BCE) A Babylonian world map, known as the Imago Mundi, is commonly dated to the 6th century BCE.[1][2] The map as reconstructed by Eckhard Unger shows Babylon on the Euphrates, surrounded by a circular landmass showing Assyria, Urartu (Armenia)[3] and several cities, in turn surrounded by a "bitter river" (Oceanus), with seven islands arranged around it so as to form a seven-pointed star. Papua New Guinea Patrol Reports Reports from government patrols are a major source of primary information on Papua New Guinea’s colonial-era history. Patrol officers and other officials wrote detailed documents reporting on all aspects of the work carried out by the patrols. The reports give first-hand accounts on many topics, from first contact with remote Highland villages, to census counts, tax collection, health care, justice, labor recruiting, plantations, missionaries, anthropological descriptions, tribal warfare, languages, and more. The reports in this collection date primarily from the post-World War II era of Papua New Guinea, up through 1975, when PNG gained independence from Australia; a few pre-War reports are also included.