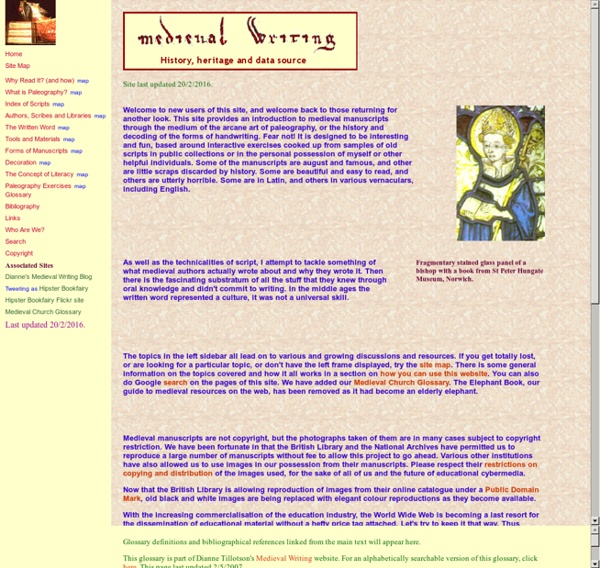 Internet History Sourcebooks Update Information 2006: In 2006 the Internet Medieval Sourcebooks and associated sourcebooks are undergoing a major overhaul to remove bad links and add more documents. 1. This project is both very large and fairly old in Internet terms. Darwin's Reading Reading was a fundamental tool in Darwin’s scientific practice. He read widely in the scientific literature of natural history, he also copiously annotated many books and articles and he systematically abstracted many of his annotations. Since a big part of his strategy for supporting the theory of evolution relied on his ability to translate the biological problems of his day into evolutionary terms, the documentary record of his Darwin’s reading cuts across the topical structure of the Darwin archive. Charles Darwin’s Library

Letter forms and abbreviations Reading old handwriting is a challenge for most people. However, as we have seen, medieval scripts are usually written in a careful, regular hand. This means they can actually be easier to tackle than a personal scrawl of the nineteenth or twentieth century, if you have learnt a few basic hints and tips. On this page you will find lots of advice about unfamiliar letters, surprisingly-shaped letters, and abbreviations. If you want to know more, you can look at more comprehensive palaeography websites listed in the Further Reading page. Home Click here to jump straight to the articles: Original Preface. The Catholic Encyclopedia, as its name implies, proposes to give its readers full and authoritative information on the entire cycle of Catholic interests, action and doctrine.

The World Wide Web project The WorldWideWeb (W3) is a wide-area hypermedia information retrieval initiative aiming to give universal access to a large universe of documents. Everything there is online about W3 is linked directly or indirectly to this document, including an executive summary of the project, Mailing lists , Policy , November's W3 news , Frequently Asked Questions . What's out there?