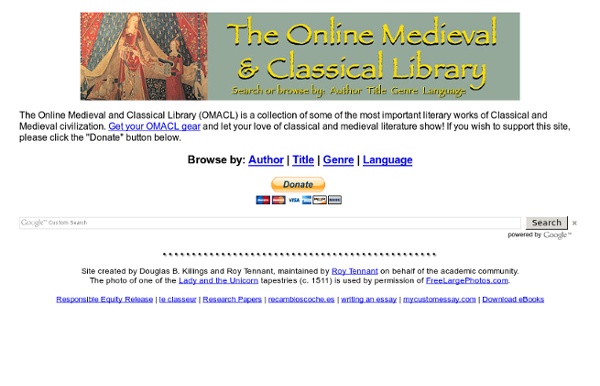 Internet History Sourcebooks Update Information 2006: In 2006 the Internet Medieval Sourcebooks and associated sourcebooks are undergoing a major overhaul to remove bad links and add more documents. 1. This project is both very large and fairly old in Internet terms. Darwin's Reading Reading was a fundamental tool in Darwin’s scientific practice. He read widely in the scientific literature of natural history, he also copiously annotated many books and articles and he systematically abstracted many of his annotations. Since a big part of his strategy for supporting the theory of evolution relied on his ability to translate the biological problems of his day into evolutionary terms, the documentary record of his Darwin’s reading cuts across the topical structure of the Darwin archive. Charles Darwin’s Library

Home Click here to jump straight to the articles: Original Preface. The Catholic Encyclopedia, as its name implies, proposes to give its readers full and authoritative information on the entire cycle of Catholic interests, action and doctrine. The World Wide Web project The WorldWideWeb (W3) is a wide-area hypermedia information retrieval initiative aiming to give universal access to a large universe of documents. Everything there is online about W3 is linked directly or indirectly to this document, including an executive summary of the project, Mailing lists , Policy , November's W3 news , Frequently Asked Questions . What's out there? Medieval and Renaissance Fact and Fiction undefined This page is meant to be a guide to resources available on the Web for people who are interested in the history, culture, literature and re-creation of the Middle Ages and Renaissance. There are hundreds of sites on the Middle Ages on the Web. I know I have only a small percentage of what is out there, but I have tried to organize this site so that you will have an easier time finding what you want.

JCS Online Resources The acclaimed Churchill Archive is now free for the first time to schools worldwide thanks to a $1 million donation from philanthropist Laurence Geller CBE. "All children should understand Sir Winston Churchill’s fundamental place in our nation’s history,” says the Rt Hon Nicky Morgan MP, Secretary of State for Education and Minister for Women and Equalities, "and schools can now seize the opportunity to access the Churchill Archive – a tremendous cache of documents that bring history to life.” Opening up exciting new opportunities for the teaching and learning of History at secondary level, the Churchill Archive - described by History Today as "the real gem of online Churchill resources" - offers cross-searchable online access to over 800,000 original documents. Highlights include:

The Britannia Lexicon Have you always wanted to travel back in time to the Middle Ages but were hesitant because you didn't speak the language? Presenting the Britannia Lexicon of strange legal, feudal, chivalric, monastic, military and architectural terms to help you understand what those guys back then were really trying to say. In addition, we will soon be including lengthier entries on particular events, wars, movements and organizations, called "Sidebars of History" which will give a more in-depth view of life, politics and religion in medieval Britain. Just click a letter below to begin.