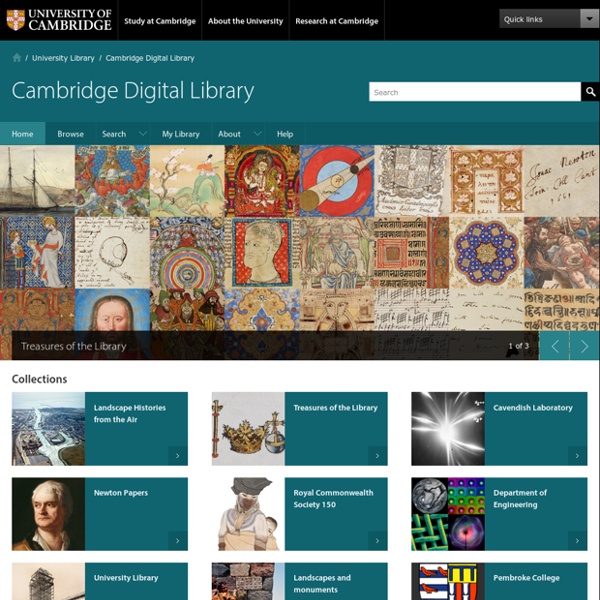 The Cairo Genizah Collection The Taylor-Schechter Cairo Genizah Collection at Cambridge University Library is the world's largest and most important single collection of medieval Jewish manuscripts. For a thousand years, the Jewish community of Fustat (Old Cairo), placed their worn-out books and other writings in a storeroom (genizah) of the Ben Ezra Synagogue, and in 1896–97 the Cambridge scholar, Dr Solomon Schechter, arrived to examine it. He received permission from the Jewish community of Egypt to take away what he liked, and he brought 193,000 manuscripts back to Cambridge.

Terrorism, Counterterrorism, and Unconventional Warfare chemical and biological weapons: global terrorism: WMD terrorism: terrorism in the United States: terrorism in Israel: terrorism in Russia: mdmss Consulting Medieval Manuscripts Online CONSULTING COLLECTIONS OF MEDIEVAL MANUSCRIPTS ONLINE (Read cover-to-cover) Llyfrgell Genedlaethol Cymru The National Library of Wales [Aberystwith] - Manuscripts How the universe appeared from nothing MacGregor Campbell, consultant There's no such thing as a free lunch, or so the saying goes, but that may not be true on the grandest, cosmic scale. Many physicists now believe that the universe arose out of nothingness during the Big Bang which means that nothing must have somehow turned into something. How could that be possible?

Why there is no such thing as empty space MacGregor Campbell, contributor Could the universe have appeared out of nothing? In a previous video, we argued that typical notions of 'something' and 'nothing' don't really make sense according to modern physics. Internet Governance Forum Introduction At the IGF 2011, Electronic Information for Libraries (EIFL) organised a workshop to discuss the findings of a recent study of perceptions of public libraries by policy makers in six countries in Africa. The study revealed that policy makers still thought of libraries in terms of printed media, and not as spaces for catalysing internet access and use. Evidence was presented that public libraries that offer innovative and ICT enabled services based on free public access to the Internet can contribute to positive change in their communities and support development goals in vital areas including health, agriculture, employment, education and children and youth at risk. The lively workshop discussion underlined the need for a shared vision and dialogue by policy makers, civil society, private industry and librarians, of how Internet enabled public libraries could contribute to achieving the Millennium Development Goals. Action Plan

Introduction to Western Manuscripts at Dartmouth College The origins of the College's early manuscript collection are undocumented. Imprecise acquisition records of the nineteenth century indicate that some single leaves were acquired by gift at least as early as the presidency of Samuel Colcord Bartlett (1877-1892). It is known that President Bartlett brought materials back from the Middle East and Europe for the Library's collections and the first early manuscripts may well have been acquired at that time. The impetus to develop a significant collection of early manuscripts for teaching purposes lies with the work of Harold Goddard Rugg, sometime Assistant Librarian of the College.

Ultrafast Camera Records at Speed of Light Researchers at the Massachusetts Institute of Technology (M.I.T.) have developed an imaging system that can acquire visual data at a rate of one trillion exposures per second–fast enough to produce a slow-motion video of a burst of light traveling the length of a one-liter bottle, bouncing off the cap and reflecting back to the bottle’s bottom. As Ramesh Raskar, an associate professor in M.I.T.’s Media Lab, explains in the video below, a high-speed camera can capture the image of a bullet mid-flight. The M.I.T. camera can capture the movement of photons, which travel about one million times faster than bullets. The researchers use a titanium-sapphire laser as a pulsed light source and direct the beam using mirrors to a plastic bottle that helps illuminate the light. Their camera consists of an array of 500 sensors, each triggered at a trillionth-of-a-second delay, Media Lab postdoctoral associate Andreas Velten says in the video.

Internet Manifesto 2014 1. Library and information services and the Internet 1.1 Library and information services are vibrant institutions that connect people with global and local information resources. They provide access to ideas and creative works and make the richness of human expression and cultural diversity available to everyone. Medieval and Early Modern Manuscripts Medieval and Early Modern Manuscripts Collection:Database and Digital Images The Medieval and Early Modern Manuscripts Collection contains 215 medieval or Renaissance manuscripts that date between the 11th and 17th centuries. This database contains item-level descriptions for each of the manuscripts and enables keyword searching as well as several different ways to browse the collection contents. For an overview of the collection, please consult the finding aid. Complete digital images are provided for some manuscripts.