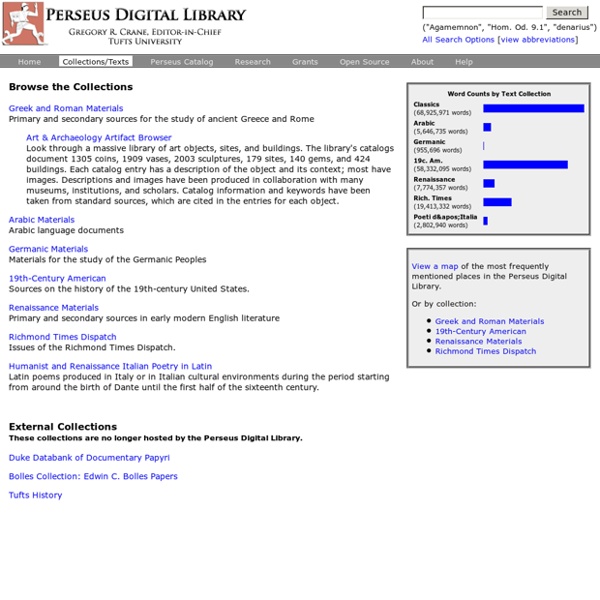 Internet History Sourcebooks Update Information 2006: In 2006 the Internet Medieval Sourcebooks and associated sourcebooks are undergoing a major overhaul to remove bad links and add more documents. 1. This project is both very large and fairly old in Internet terms. Watch the Destruction of Pompeii by Mount Vesuvius, Re-Created with Computer Animation (79 AD) A good disaster story never fails to fascinate — and, given that it actually happened, the story of Pompeii especially so. Buried and thus frozen in time by the eruption of Mount Vesuvius in 79 AD, the ancient Roman town of 11,000 has provided an object of great historical interest ever since its rediscovery in 1599. Baths, houses, tools and other possessions (including plenty of wine bottles), frescoes, graffiti, an ampitheater, an aqueduct, the "Villa of the Mysteries": Pompeii has it all, as far as the stuff of first-century Roman life goes. The ash-preserved ruins of Pompeii, more than any other source, have provided historians with a window into just what life in that time and place was like. A Day in Pompeii, an exhibition held at the Melbourne Museum in 2009, gave its more than 330,000 visitors a chance to experience Pompeii's life even more vividly.

Darwin's Reading Reading was a fundamental tool in Darwin’s scientific practice. He read widely in the scientific literature of natural history, he also copiously annotated many books and articles and he systematically abstracted many of his annotations. Since a big part of his strategy for supporting the theory of evolution relied on his ability to translate the biological problems of his day into evolutionary terms, the documentary record of his Darwin’s reading cuts across the topical structure of the Darwin archive. Charles Darwin’s Library

Crash Course: Evolution of the Roman Military Accorded by some as being the most effective and long-lived military institution known to history, Rome’s military was the key to its rise from a relative backwater settlement in Italy to the most dominant power of the ancient world. Throughout its millennia-spanning history, Rome’s military underwent substantial changes as it contended with challenges both within its expanding borders and from neighboring adversaries who threatened to harm the integrity of its borders. Here is a crash course on the evolution of the Roman military. Phase I (c. 753 BC – c. 578 BC)

Grimoar - Occult Texts Welcome to our library Welcome in our occult texts library. It contains 2052 unrevised texts in pdf, doc and other formats. Librarians are responsible neither for text redaction nor for their contents. It is possible that some of the texts are still under copyright. If you are not sure you act in accordance with your local law, please do not download anything. University of Michigan - Papyrology Hours listed are for the reference collection only. If you wish to view papyrus, please check the exhibit page or schedule a class tour. Please note that since we have limited staffing and limited space, it is best to e-mail or call ahead in case of unexpected schedule conflicts. Thank you. A world-renowned collection of ancient texts and documents dating from about 1,000 BCE to 1,000 CE

Did You Know?: Did Ancient Greeks And Romans Explore Iceland? Iceland did not become a permanent place of settlement until the 9th century. The first inhabitants that built a long-term community on Iceland predominantly came from Norway, and later descendants of the original settlers were convinced that their ancestors’ exodus from the old homeland was a form of protest against the growing authority of King Harald Finehair (ruled approximately 860-940). It is clear that the Norsemen were the first settlers to turn Iceland into a long-term home. Yet, the question of if they were the first people to discover the island is another story. In fact, it is possible that Iceland may have been located by a Greek explorer as early as the 4th century BCE and that Romans had this information at their disposal during the time of the Roman occupation of Britain.

Gutenberg On August 26 2020, the Project Gutenberg website underwent some major changes. These changes had been previewed since early 2020, and visitors to the old site were invited to try the new site, including giving input via a brief survey. The old site is no longer available. If you found yourself on this page unexpectedly, it is because an old page was redirected here. Please use the navigation menus at the top of the page to find what you were looking for.

Duke University - Papirology Literary papyri Subliterary papyri (magical texts etc.) Documentary papyri The World Wide Web project The WorldWideWeb (W3) is a wide-area hypermedia information retrieval initiative aiming to give universal access to a large universe of documents. Everything there is online about W3 is linked directly or indirectly to this document, including an executive summary of the project, Mailing lists , Policy , November's W3 news , Frequently Asked Questions . What's out there?

"Our flagship collection, under development since 1987, covers the history, literature and culture of the Greco-Roman world." by feillet Feb 11