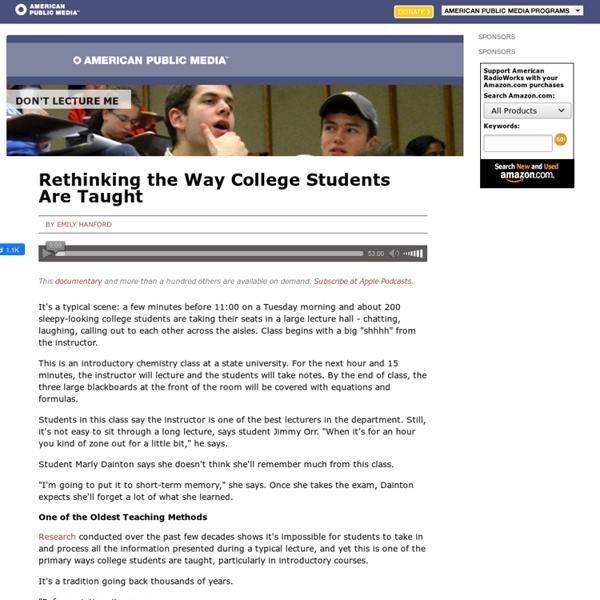 It's a typical scene: a few minutes before 11:00 on a Tuesday morning and about 200 sleepy-looking college students are taking their seats in a large lecture hall - chatting, laughing, calling out to each other across the aisles. Class begins with a big "shhhh" from the instructor. This is an introductory chemistry class at a state university. For the next hour and 15 minutes, the instructor will lecture and the students will take notes. Students in this class say the instructor is one of the best lecturers in the department. Student Marly Dainton says she doesn't think she'll remember much from this class. "I'm going to put it to short-term memory," she says. One of the Oldest Teaching Methods Research conducted over the past few decades shows it's impossible for students to take in and process all the information presented during a typical lecture, and yet this is one of the primary ways college students are taught, particularly in introductory courses. He knew that Elton was right. Related:  Other peoples collections

The Problem with Lecturing Back in the late 1970s a colleague came to David Hestenes with a problem. The two of them were physics professors at Arizona State University. Hestenes was teaching mostly graduate students, but his colleague was teaching introductory physics, and the students in his classes were not doing well. Semester after semester, the class average on his exams never got above about 40 percent. "And I noted that the reason for that was that his examination questions were mostly qualitative, requiring understanding of the concepts," says Hestenes. Most professors didn't test for this kind of understanding; students just had to solve problems to pass the exams. This observation prompted a series of conversations between Hestenes and his colleague about the difference between being able to solve problems and really understanding the concepts behind those problems. Testing Understanding They developed a multiple-choice test, now known as the Force Concept Inventory, or FCI. Taking It to Heart

Modeling Instruction Program Patrol Logs Don't Lecture Me | American RadioWorks by Emily Hanford College students spend a lot of time listening to lectures. But research shows there are better ways to learn. And experts say students need to learn better because the 21st century economy demands more well-educated workers. Lecturing was invented as a way to share information in a time before books were widely available. Now, there are better approaches. The traditional college lecture has never been a good way to learn. In the past 30 years, scientists have discovered a lot about how people learn. The Tomorrow's College series is funded by a grant from Lumina Foundation, which is committed to enrolling and graduating more students from college, and by a grant from the Spencer Foundation, which is dedicated to the belief that research is necessary to the improvement of education.

The Modeling Method: a Synopsis | American Modeling Teachers Association The Modeling Method has been developed to correct many weaknesses of the traditional lecture-demonstration method, including the fragmentation of knowledge, student passivity, and the persistence of naive beliefs about the physical world. Coherent Instructional Objectives Student-Centered Instructional Design Instruction is organized into modeling cycles which move students through all phases of model development, evaluation and application in concrete situations — thus promoting an integrated understanding of modeling processes and acquisition of coordinated modeling skills.The teacher sets the stage for student activities, typically with a demonstration and class discussion to establish common understanding of a question to be asked of nature.