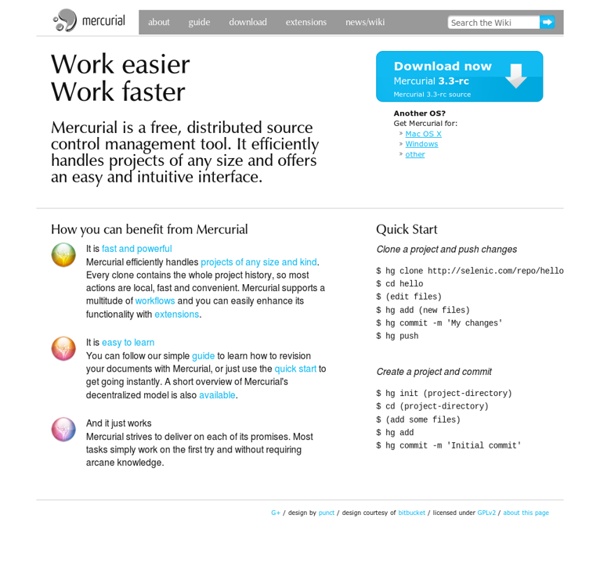 How you can benefit from Mercurial It is fast and powerful Mercurial efficiently handles projects of any size and kind. Every clone contains the whole project history, so most actions are local, fast and convenient. Mercurial supports a multitude of workflows and you can easily enhance its functionality with extensions. It is easy to learn You can follow our simple guide to learn how to revision your documents with Mercurial, or just use the quick start to get going instantly. A short overview of Mercurial's decentralized model is also available.

Contributing to Django Django is a community that lives on its volunteers. As it keeps growing, we always need more people to help others. As soon as you learn Django, you can contribute in many ways: Join the django-users mailing list and answer questions. git - the simple guide - no deep shit! git - the simple guide just a simple guide for getting started with git. no deep shit ;) by Roger Dudler credits to @tfnico, @fhd and Namics this guide in deutsch, español, français, indonesian, italiano, nederlands, polski, português, русский, türkçe, မြန်မာ, 日本語, 中文, 한국어 Vietnamese please report issues on github setup Download git for OSX Download git for Windows

2011 OSINT Discovery Toolkit–Reuser’s Repertorium Categories: Blog Wisdom,Book Lists,Briefings (Core),Fact Sheets,Handbook Elements,Historic Contributions,IO Multinational,Methods & Process,Tools,White Papers This is THE toolbox, available in both long and short versions, we recommend you start with the long and then rapidly migrate to the short. Arno is THE “dean” of OSINT for government, and the “dean” of the advanced librarian discovery movement. Git Tips I thought I would get down in a blog post the different Git commands and tips that I find really useful, because every now and then it seems I need to refer back to these notes (which up until this point have been in a txt file in my Dropbox) if I've not used a particular command in a while. Hopefully you'll find them useful too. What we'll cover

A successful Git branching model » nvie.com In this post I present the development model that I’ve introduced for some of my projects (both at work and private) about a year ago, and which has turned out to be very successful. I’ve been meaning to write about it for a while now, but I’ve never really found the time to do so thoroughly, until now. I won’t talk about any of the projects’ details, merely about the branching strategy and release management. It focuses around Git as the tool for the versioning of all of our source code. (By the way, if you’re interested in Git, our company GitPrime provides some awesome realtime data analytics on software engineering performance.)

Installing Python Modules This document describes the Python Distribution Utilities (“Distutils”) from the end-user’s point-of-view, describing how to extend the capabilities of a standard Python installation by building and installing third-party Python modules and extensions. Introduction Although Python’s extensive standard library covers many programming needs, there often comes a time when you need to add some new functionality to your Python installation in the form of third-party modules. This might be necessary to support your own programming, or to support an application that you want to use and that happens to be written in Python. Contribute to the project What are the financial needs of VideoLAN? Buy hardware for developing and testing purposes (DVDs, satellite cards and antenna, MPEG encoding cards,...) Maintain the servers and hardware to run VideoLAN services. Promote the project by organizing or participating in events (FOSDEM, Linux Expo Paris, ...) What is the legal structure of VideoLAN?

SVN Tutorial Apache Subversion which is often abbreviated as SVN, is a software versioning and revision control system distributed under an open source license. Subversion was created by CollabNet Inc. in 2000, but now it is developed as a project of the Apache Software Foundation, and as such is part of a rich community of developers and users. This tutorial will give you great understanding on SVN system needed to maintain current and historical versions of files such as source code, web pages, and documentation. This tutorial is designed for Software Professionals who are willing to learn SVN system in simple and easy steps. Top 10 Git Tutorials for Beginners By Jacob Gube As a web designer or web developer, you’ve probably heard of Git before, a version control system that has had a swift ascension to ubiquity due in part to GitHub, a social code repository site. If you’d like to learn how to use Git, check out my top 10 favorite Git tutorials for beginners.

Good for version control and whatnot by thelivingded Nov 17