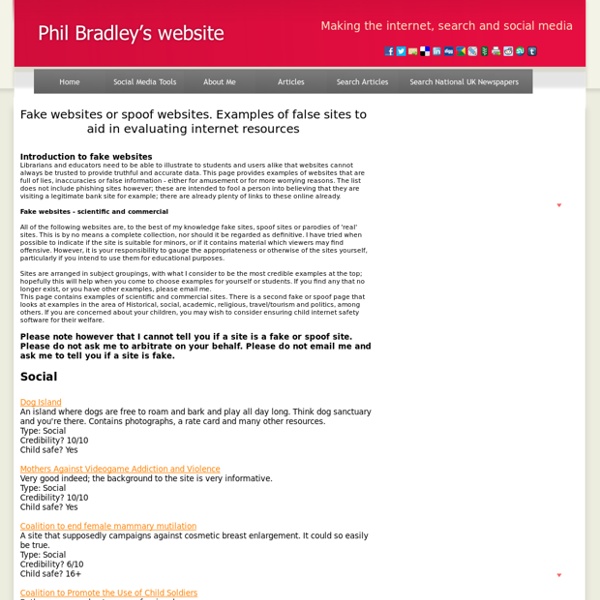 Introduction to fake websites Librarians and educators need to be able to illustrate to students and users alike that websites cannot always be trusted to provide truthful and accurate data. This page provides examples of websites that are full of lies, inaccuracies or false information - either for amusement or for more worrying reasons. The list does not include phishing sites however; these are intended to fool a person into believing that they are visiting a legitimate bank site for example; there are already plenty of links to these online already. Fake websites - scientific and commercial All of the following websites are, to the best of my knowledge fake sites, spoof sites or parodies of 'real' sites. Sites are arranged in subject groupings, with what I consider to be the most credible examples at the top; hopefully this will help when you come to choose examples for yourself or students. This page contains examples of scientific and commercial sites. Social Dog Island Type: Social

MAVAV | Mothers Against Videogame Addiction and Violence The perils of social media.. | UEL Psychology Librarian What Not to Crochet | because there's always one more crochet design that shouldn't be made! Serial: An engaging way to develop student skills? [*spoiler alert] | Shelldaynight * if you have never listened to Serial you may want to look away now… Anyone who knows me will know that I (and a million other people) am obsessed with the podcast Serial. It is a thought provoking, engaging and thoroughly addictive real life, murder mystery and an arguably pretty dark form of “entertainment”. But, could podcasts like this actually help students to develop their academic and digital literacy skills? 1. Critical thinking There is no known answer. 2. Serial has become a phenomena and Reddit has even dedicated a forum for people to discuss it. 3. This is a true story and therefore much of the information discussed in the podcast is of public record. 4. Although information about the case is publicly available this sharing of information, digging around social media profiles and speculating about people’s involvment in the crime could be considered unethical and even illegal if you are found to be libelling someone. Like this: Like Loading...

Using social media to promote your digital collections Crowdsourcing means to gather contributions from a large community in order to achieve a particular goal. While the primary goal of crowdsourcing activities might not be to increase visibility of a collection, this is a common side-effect. Building a crowdsourcing platform from scratch could be a significant undertaking, however many existing platforms are available that you might find are suitable. Examples - University College London and the Imperial War Museum University College London runs Transcribe Bentham, a crowdsourced project aimed at transcribing the unpublished works of Jeremy Bentham. Measures for success Measures for crowdsourcing activity may be linked to the project goal, and the number of contributors engaged in the project. More information Skills and knowledge required Experience of community management Cost £££££ - continuous investment required Resources: Our detailed guide to developing community collections

Tate Social Media Communication Strategy 2011–12 Tate Online aims to help fulfil Tate’s mission to increase public understanding and enjoyment of British and modern international art. Given the rapidly developing scope and potential of digital communications, Tate Online is uniquely placed to reach new audiences and engage them in new ways. Tate Online Strategy 2010–12 We also want to sustain, build and broaden the range of audiences who experience Tate. In recent years the web has undergone a significant transformation, characterised by the emergence of self-publishing platforms (e.g. Acting upon its mission statement, Tate has responded to web users’ demands for accessibility and person-to-person online contact by taking content to its audiences, where they are already congregating, and by providing spaces for people to discuss, debate and engage with art. This document outlines an approach to communicating with, and engaging audiences on third-party social media and networking websites. Goals 1. 2. 3. 4. 5. 6. 7. 8. 9. 10. 11. 12.

6 Easy Ways to Tell if That Viral Story is a Hoax “And so it begins … ISIS flag among refugees in Germany fighting the police,” blared the headline on the Conservative Post; “with this new leaked picture, everything seems confirmed”. The image in question purported to show a group of Syrian refugees holding ISIS flags and attacking German police officers. For those resistant to accepting refugees into Europe, this story was a godsend. The photo quickly spread across social media, propelled by far-right groups such as theEnglish Defence League and Pegida UK. At the time of writing, the page claims to have been shared over 300,000 times. The problem is, the photo is three years old, and has precious little to do with the refugee crisis. But news in the digital age spreads faster than ever, and so do lies and hoaxes. But ordinary people are also starting to take a more sophisticated approach to the content they view online. Reverse image search YouTube DataViewer Jeffrey’s Exif Viewer FotoForensics WolframAlpha Online maps

"Social" the Right Way is a Timesuck - LibUX Pew Research Center’s 2014 Social Media Update, published Friday, validates pretty much any argument libraries have to make for actively reaching out through social media. Your audience is there. This is a numbers game. Whether libraries should be there is sort of head-scratchingly moot, but brand decisions about which social bandwagon to jump1 should be made only when libraries are prepared to commit real resources to their upkeep. Crafting good content is not an insubstantial timesuck. A basic level of engagement requires just the right amount of content, too. I think, here, it is also important to mention that users expect brands to actively monitor their channels. How Much to Post We have to be a little honest about the realities of library social media. Post to Twitter at least 5 times a day. Several studies show that posting too little risks losing “connection with your audience,” that brands should shoot for ten (10) posts per week. 2 Hours Per Channel

Defining digital literacy in the Faculties | Professionalism in the Digital Environment (PriDE) We are thrilled to announce that we have completed the first round of ‘creative think tank’ sessions with our multi-stakeholder faculty learning communities. It was wonderful to see so many people engaging in the concept of digital literacies, viewing it from different angles and trying to define it in ways which is meaningful to them, their discipline and their students. All participants engaged creatively in thinking about: What students are currently doing in the digital environment and what we would want them to be doingWhat the HEA employability profiles say about graduate skills in each of the disciplines and how these may be influenced/changed by the technology around usThe uniqueness of the disciplines and how they might influence digital literacies… are some skills more desirable than others? A number of excellent statements have already started emerging which highlight the uniqueness, values and beliefs of each of our faculties in relation to digital literacies. Like this:

ideas about information thewikiman Edit: Despite my clarifications, people are still misinterpreting my original post as a proposed ‘solution’ to the problem of the Library degree, so I’ve rewritten this to stop that happening. To embark upon a Library Masters in 2014 is a huge undertaking. Assuming you do it part-time, whilst working to support yourself, you’ll spend between ten and eighteen thousand pounds over two years, along with, at a conservative estimate, 1500 hours of your time.[1] The question is, does the Library degree really represent the best use of this investment? What if you were to spend the same amount of time and money on a self-structured curriculum of study, events, conferences, training, and building an online portfolio, whilst continuing to work in an information role. I think you would. The problem with the Library degree I have many issues with the MA/Msc in Library & Information Management (or similar) as it currently stands, in the UK. What do we do about it?

Tagxedo - Word Cloud with Styles patrickpowers If you’ve signed up for a social media account, you’ve seen it. It’s the box that no one seems to notice. Before any social media site creates a new user account, it’s going to ask for agreement to its terms of service. This innocuous little box may mean nothing to most users when it could mean everything. Facebook, Twitter, LinkedIn and YouTube all have terms of service that make it abundantly clear — violate the terms and the company can terminate an account. There is no need for debate. I know of only a handful of cases when a social media site simply terminated an account for violating terms of service. There are scores of examples of those in violation. 1. It’s difficult keeping personal and professional lives separate and Facebook is no different. Facebook couldn’t be clearer: You will not create more than one personal profile. It seems in recent weeks Facebook is offering an out for people in violation of this rule. 2. There’s not better way to explain Twitter than to show Twitter.