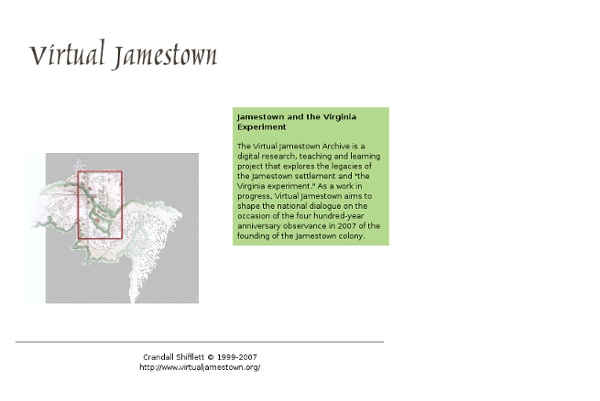 History Globe In 1606, some 105 adventurers set off from England to try and establish the first permanent English colony in the New World. They settled in what is now the state of Virginia and called their colony first James Fort, and then James Towne, in honor of James I, the King of England. The early years of the colony were nearly a total disaster. Almost half of the settlers died due to poor choices in settlement location, management of resources, and quarrels with the indigenous Powhatan Indians. You are the Captain of the Jamestown Colony: Can you do any better than the real colonists? You will have a copy of the London Company's Instructions to help guide you. Scoring Factors: After you make all your decisions, you will receive a report on the state of your colony based on these factors: Food: How well can you provide it for your colonists? Make History: You will get to compare your colony to the historical Jamestown at the end. Good luck and Godspeed!

Busch Gardens Each year, Busch Gardens® pushes the entertainment envelope to develop new and exciting thrills, award-winning shows and delicious culinary delights. This year is no exception. In 2014, Busch Gardens introduces London Rocks™, a musical journey that explores the roots of rock-n-roll and transforms the Globe Theatre into a rousing 25-minute live action, multi-media rock spectacular. Busch Gardens has also packed the entire year full of excitement with a spectacular line up of special events including the return of Food & Wine Festival, IllumiNights: A Busch Gardens® Encore, Howl-O-Scream® and Christmas Town™: A Busch Gardens® Celebration, the holiday spectacular that transforms the European-themed park into a winter wonderland. Also, enjoy world-class thrills aboard Verbolten®, Busch Gardens’ newest attraction located in Oktoberfest. Purchase a Fun Card to play as much as you want! Admission Fee: $72 Fun Card

Jamestown The Virginia Company sailed from England to try to establish the first permanent English colony in the New World. Their instructions were to settle Virginia, find gold and a water route to the Orient. The explorers landed on Jamestown Island on the banks of the James River on May 14, 1607. Historic Jamestowne The mission of Historic Jamestowne is to preserve, protect and promote the original site of the first permanent English settlement in North America and to tell the story of the role of the three cultures - European, North American and African - that came together to lay the foundation for a uniquely American form of democratic government, language, free enterprise and society. Jamestown Settlement The story of the people who founded Jamestown and of the Virginia Indians they encountered is told through film, gallery exhibits and living history at Jamestown Settlement. Jamestown 1607 America's 400th Anniversary: Jamestown 2007