Home - No Flying No Tights 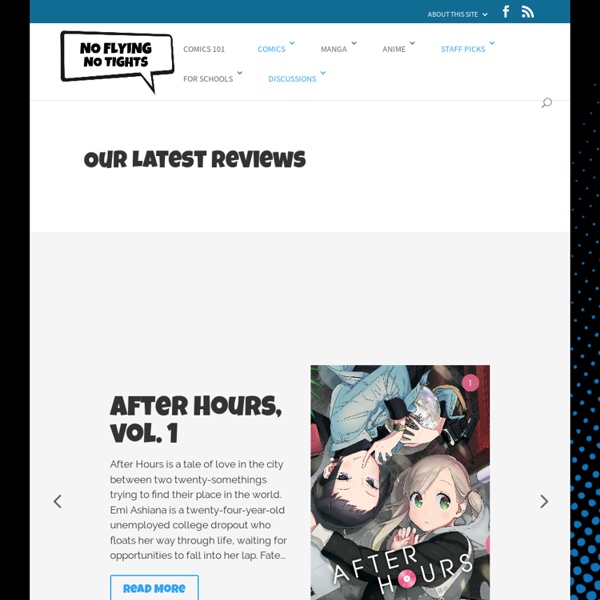 Hasegawa Kodaka is a high school transfer student who has trouble making friends. As does his weird classmate Mikazuki Yozora, whom Kodaka discovers in lively conversation with her “air friend” (it’s like an air guitar, only a friend). Kodaka and Yozora… Read more → Boris is a robot of leisure. He is designed as an integral part of GLOMCO’s Zukunfthaus (the “house of the future”) in the Neue Vista Estates housing development and can complete all the tasks necessary to hold a swanky party:…

15 Early Chapter Book Series to Turn Kids into Voracious Readers This Summer Summer is a great time to introduce kids to new chapter book series. If a kid discovers a series they enjoy, they will often read the entire series. Here are fifteen fantastic early chapter book series for newly independent readers. With summer reading, my main goal for my kids is to get them hooked on reading. Graphic attraction – graphic novels in libraries Graphic novels have become increasingly popular with readers of all ages. Alison Lee looks at the benefits, uses and implications for the library of developing a graphic novel collection. The graphic novel – literature or comic?

TRAILS-InformationLiteracy - Lesson Plans Skip to main content Create interactive lessons using any digital content including wikis with our free sister product TES Teach. Get it on the web or iPad! 5 Things Every School Library Website Should Have I ran across this article the other day outlining the 5 "essentials" that every school website should have. Naturally, it got me thinking about my own library's web presence. I'm one of those nerdy people who actually really loves tinkering with web design. Don't get me wrong, I'm no code writer, but given a little time and a few tools, I can make, if nothing else, a huge mess good effort.

Graphic Novel Programming for All-Ages and All Budgets If there’s one thing librarians are always looking for, it’s new ideas for programs, especially programs that tie-in with the books in their collection. Graphic novels offer a lot of possibilities for programming for all ages and all budgets. Because of their combination of art and words, graphic novels allow for programs exploring writing, drawing, crafts, and more. Here are some ideas for graphic novel programming, broken down by their estimated costs and/or estimated planning time. But these are only the beginning. Top 10 Graphic Novels 2017 As the range of children’s graphic novels expands, authors are treading new ground and tackling different topics in imaginative ways. This year, our top 10 list includes Svetlana Chmakova’s Brave, a genuinely fresh take on bullying, and Melissa Jane Osborne and Veronica Fish’s The Wendy Project, in which a traumatic accident blurs the line between reality and fantasy for a teenage girl. Katie O’Neill’s The Tea Dragon Society has a traditional feel to it, but her tale of dragons who produce magical tea is totally original. On the other end of the emotional scale, Louis Undercover is a story of parental love, alcoholism, and divorce, which may help many children realize they are not alone.

The Comic Book Collection - Newspaper and Current Periodical Reading Room (Serial and Government Publications Division, Library of Congress) The largest publicly available collection of comic books in the United States is housed in the Newspaper and Current Periodical Reading Room. The collection includes U.S. and foreign comic books--over 12,000 titles in all, totaling more than 140,000 issues. Primarily composed of the original print issues, the collection includes color microfiche of selected early comic book titles (such as Superman, More Fun, and Action Comics), bound volumes of comic books submitted by the publishers and special reprints. The collection is most comprehensive from the mid-1940s on; however, many titles date back to the 1930s. For some of the earliest modern comic books (those which began publishing in the 1930s), the collection holdings begin with the early 1940s. Acquisitions:

Teaching With Graphic Novels Illustration by Gareth Hinds On March 14, 2013, teachers in the Chicago Public Schools were told, without explanation, to remove all copies of Marjane Satrapi’s graphic novel Persepolis (Pantheon, 2003) from their classrooms. A day later, facing protests from students and anti-censorship organizations, Chicago Public Schools CEO Barbara Byrd-Bennett explained the move. The “powerful images of torture” on a single page of the book made it unsuitable for seventh graders and required the district to give teachers in grades eight through 10 special professional development classes before they could teach it. The book was pulled from classrooms for those grades, but remained in school libraries. This is the paradox of graphic novels: The visual element that gives them their power can also make them vulnerable to challenges.

Association for Library Service to Children (ALSC) These Graphic Novel Reading Lists are available for students Kindergarten to 2nd grade, 3rd to 5th grade and 6th to 8th grade. PDFs of the book lists are available online in full color and black and white and are free to download, copy and distribute. Libraries are able to customize the booklist with their own information, hours, and list of programs before printing and distributing. Graphic novel here is defined as a full-length story told in paneled, sequential, graphic format. The list does not include book-length collections of comic strips, wordless picture books, or hybrid books that are a mixture of traditional text and comics/graphics. The list includes classics as well as new titles that have been widely recommended and well-reviewed, and books that have popular appeal as well as critical acclaim.

Using Comics and Graphic Novels in the Classroom (The Council Chronicle, Sept. 05) While Americans tend to view comics as “fodder for children,” people in Europe and Japan have a more positive view of the medium, explains John Lowe, who is chair of the Sequential Art Department at the Savannah College of Art and Design in Georgia. Lowe thinks comics deserve more credit, especially since they launched his interest in literature. “I started reading comics, and then I got into other types of fiction and literature. I stopped reading comics a little later, but I don’t think I would have made the leap [to literature] if it weren’t for comics.” In his case, Lowe says, he literally went from reading “Batman to Faulkner.”