I don't always cook, but when I do I prefer to cook comically. 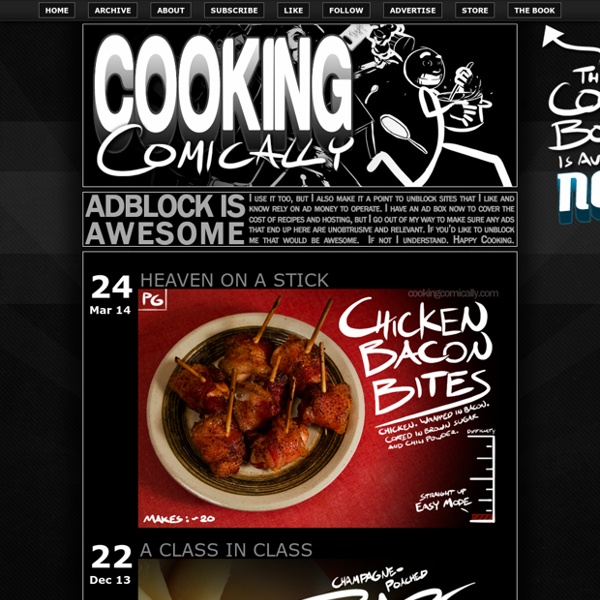 Nov 13 It’s Electric. So, Boing Boing asked me to do a recipe for them. The only caveat is that it involve caffeine. Done and Done. Oct 13

Stumblers Who Like 50 of the World's Best Breakfasts – Written by Victoria Philpott Not quite had your fill of breakfasts just yet? Check out our beautifully visual list of the 30 best breakfasts from around the world. Plan your next culinary adventure or just get a little adventurous with breakfast at the weekend. Salivating. Gerd Ludwig's "Long Shadow of Chernobyl" project Internationally-renowned photojournalist Gerd Ludwig has spent years documenting the aftermath of the Chernobyl nuclear disaster. In 1986, errors at the plant in Ukraine led to an explosion that ultimately caused over a quarter of a million people to permanently evacuate their homes to escape the radiation and radioactive fallout. Over the course of several trips to the site and the region for National Geographic Magazine in 1993, 2005, and 2011, Ludwig has amassed a documentary record of a people and a place irreparably altered by a tragic accident. His 2011 trip was partially funded by a Kickstarter campaign. Now Ludwig has released an iPad app with over 150 photographs, video, and interactive panoramas. Gathered here is a small selection of the work Ludwig has produced over the years of the still-unfolding tragedy. -- Lane Turner (23 photos total)

untitled From the molten yolk and bacon crunch of a hand-held breakfast, to the gooey charm of grilled cheese for lunch, nothing matches the simple pleasures of well-made sandwiches. They're quick to assemble, infinitely adaptable, easy to eat, and immediately satisfying—the very definition of good food. The 25 sandwiches you're about to meet can be thrown together during the average basketball halftime or, with practice, during the seventh-inning stretch. Scottish Farmhouse Eggs Decided to mix things up and do a recipe. This is one I’ve made forever and I’m not 100% positive where I picked it up. It is always a crowd pleaser for brunch or breakfast. Special thank you to Dawnland Mama for the farm fresh duck eggs (even though she is a vegan herself).

How to plan a round-the-world trip - travel tips and articles Itʼs the ultimate trip: circumnavigating the planet, and stopping off wherever takes your fancy. Great for travellers who want to see it all, or who are just plain indecisive. But booking a round-the-world (RTW) trip can be a complex business. Hereʼs our guide to getting started. How to do it Smart tips to make life easier - StumbleUpon Posted on February 24, 2012 in Humor If you’re new here, you may want to subscribe to our RSS feed or follow us on Facebook or Twitter . Thanks for visiting! Rate this Post

Peanut Butter Cocoa Krispies Smores Bars I haven’t had real, good old-fashioned smores that are made over a campfire in far too long. Like about twenty years, give or take, but who’s counting. The last time I roasted marshmallows over a campfire was when I was a Girl Scout. 10 Mind-Blowing Theories That Will Change Your Perception of the World Reality is not as obvious and simple as we like to think. Some of the things that we accept as true at face value are notoriously wrong. Scientists and philosophers have made every effort to change our common perceptions of it. The 10 examples below will show you what I mean. 1. Great glaciation.

Simple vegetable side dishes I have made up for a childhood of hating most vegetables in adulthood and love them in abundance. In summer I want salads at most meals, and in winter I love cooked vegetables. My favourite way of eating vegetables in winter is simply oven roasted mixed vegetables. Olive oil, garlic (or not), herbs, salt (or smoked salt) and then to roast them until the outer flesh is slightly caramelised and the inner flesh is nice and soft. I also like to think of ways to wake up and add flavour to simple vegetables. Football Jello Shot Recipes Top 10 Football Jello Shots Shake things up at your football party with these ultimate game day jello shot recipes. The Referee Jello Shot Don’t get penalized for "delaying the game!" Make this easy and delicious jello shot for your next sports party. The Anthem Jello Shot

100 little things that travel has taught me Travel has been one of my most valuable teachers. Rather than sit in a classroom and learn about the world through a someone else’s eyes, I did it through adventures and misadventures, tears and laughter. I know I still have so much to discover, but here are some lessons that sometimes I had to learn the hard way. 5 Real Animal Friendships Straight Out of a Disney Movie Cartoons notwithstanding, we are generally raised with the knowledge that animals kill one another. The process is messy, but it's all a part of an intricate balance; the death of one creature provides life for another. But just sometimes, vicious carnivores of the world take an appraising look at centuries of biological necessity, then turn their back on it and say, "Screw that noise, let's be friends." #5.