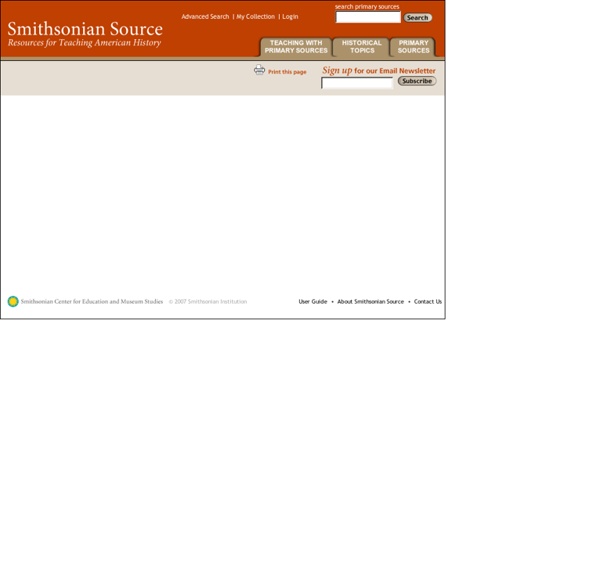 New York Public Library Puts 20,000 Hi-Res Maps Online & Makes Them Free to Download and Use When I was a kid, my father brought home from I know not where an enormous collection of National Geographic magazines spanning the years 1917 to 1985. I found, tucked in almost every issue, one of the magazine’s gorgeous maps—of the Moon, St. Petersburg, the Himalayas, Eastern Europe’s ever-shifting boundaries. I became a cartography enthusiast and geographical sponge, poring over them for years just for the sheer enjoyment of it, a pleasure that remains with me today. Whether you’re like me and simply love the imaginative exercise of tracing a map’s lines and contours and absorbing information, or you love to do that and you get paid for it, you’ll find innumerable ways to spend your time on the new Open Access Maps project at the New York Public Library.

Many Pasts Many Pasts This feature contains primary documents in text, image, and audio about the experiences of ordinary Americans throughout U.S. history. All of the documents have been screened by professional historians and are accompanied by annotations that address their larger historical significance and context. Browse the list of documents below (sorted by time period, beginning with the earliest).

National Art Inventories What are the Inventories? The Inventories of American Painting and Sculpture document more than 400,000 artworks in public and private collections worldwide. The Inventory of American Paintings includes works by artists who were active in America by 1914. The Inventory of American Sculpture has no cut-off date and includes works from the colonial era through contemporary times. These online databases are supplemented by a photographic collection of over 80,000 images. West Point Altas Collection About Our Atlases In 1938 the predecessors of today's Department of History at the United States Military Academy began developing a series of campaign atlases to aid in teaching cadets a course entitled, "History of the Military Art." Since then, the Department has produced over six atlases and more than one thousand maps, encompassing not only America’s wars but global conflicts as well. In keeping abreast with today's technology, the Department of History is providing these maps on the internet as part of the department's outreach program. The maps were created by the United States Military Academy’s Department of History and are the digital versions from the atlases printed by the United States Defense Printing Agency. We gratefully acknowledge the accomplishments of the department's former cartographers, Mr.

Our Documents - 100 Milestone Documents The following is a list of 100 milestone documents, compiled by the National Archives and Records Administration, and drawn primarily from its nationwide holdings. The documents chronicle United States history from 1776 to 1965. Complete List of Documents Please note that you can always use the thumbnail images at the top of every page to navigate directly to any of the 100 Milestone Documents. home Primary Sources: Overview of Collections One of the nation’s top collections of rare law books is housed in the Paskus-Danziger Rare Book Room of the Lillian Goldman Library at the Yale Law School. The collection is particularly strong in Anglo-American common law materials, including case reports, digests, statutes, trials, treatises, and popular works on the law. Other strengths include Roman and canon law, international law (especially the works of Hugo Grotius and Samuel Pufendorf), and early law books from most European countries.