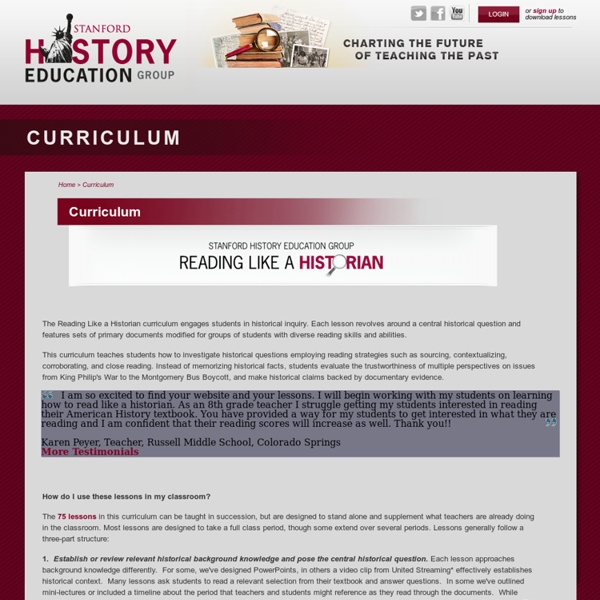 The Reading Like a Historian curriculum engages students in historical inquiry. Each lesson revolves around a central historical question and features sets of primary documents modified for groups of students with diverse reading skills and abilities. This curriculum teaches students how to investigate historical questions employing reading strategies such as sourcing, contextualizing, corroborating, and close reading. Instead of memorizing historical facts, students evaluate the trustworthiness of multiple perspectives on issues from King Philip's War to the Montgomery Bus Boycott, and make historical claims backed by documentary evidence. I am so excited to find your website and your lessons. I will begin working with my students on learning how to read like a historian. Karen Peyer, Teacher, Russell Middle School, Colorado Springs How do I use these lessons in my classroom? 1. *Note: United Streaming requires a subscription to Discovery Education. 2. 3. Of course!

Internet History Sourcebooks Update Information 2006: In 2006 the Internet Medieval Sourcebooks and associated sourcebooks are undergoing a major overhaul to remove bad links and add more documents. 1. This project is both very large and fairly old in Internet terms. At the time it was instigated (1996), it was not clear that web sites [and the documents made available there] would often turn out to be transient. As a result there is a process called "link rot" - which means that a "broken link" is a result of someone having taken down a web page. What Is an "Inquiry Lesson"? What Is an "Inquiry Lesson"? A lesson where students analyze historical evidence in order to form and test hypotheses about past events. Rationale Darwin's Reading Reading was a fundamental tool in Darwin’s scientific practice. He read widely in the scientific literature of natural history, he also copiously annotated many books and articles and he systematically abstracted many of his annotations. Since a big part of his strategy for supporting the theory of evolution relied on his ability to translate the biological problems of his day into evolutionary terms, the documentary record of his Darwin’s reading cuts across the topical structure of the Darwin archive. Charles Darwin’s Library Annotated books are principally at Cambridge University Library and the remainder are displayed at Down House. In 1875, a Catalogue of Darwin’s scientific books at Down House was compiled by Thomas W.

The World Wide Web project The WorldWideWeb (W3) is a wide-area hypermedia information retrieval initiative aiming to give universal access to a large universe of documents. Everything there is online about W3 is linked directly or indirectly to this document, including an executive summary of the project, Mailing lists , Policy , November's W3 news , Frequently Asked Questions . What's out there? Pointers to the world's online information, subjects , W3 servers, etc. Help

Public Domain Collections: Free to Share & Reuse That means everyone has the freedom to enjoy and reuse these materials in almost limitless ways. The Library now makes it possible to download such items in the highest resolution available directly from the Digital Collections website. Search Digital Collections No permission required. No restrictions on use. Below you'll find tools, projects, and explorations designed to inspire your own creations—go forth and reuse! Collections in Melbourne: A Guide to Commonwealth Government Records - Collections in Melbourne: A Guide to Commonwealth Records Celia Blake Published by the National Archives of Australia This is guide number 8 in the series of research guides published by the National Archives. The Melbourne office of the National Archives of Australia holds a wealth of material that will interest both professional and family historians. The collection is especially rich because the original seat of the Commonwealth Parliament was located in Melbourne.