Manuel Maqueda -Author, speaker, entrepreneur, activist. An award-winning writer and director of narrative and documentary films, Kelly has worked across Europe, Asia and America and is currently Artist in Residence at the faculty of Arts and Sciences at Harvard University. 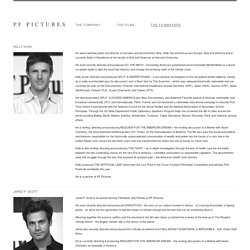 He most recently directed and produced DO THE MATH - chronicling America's preeminent environmentalist Bill McKibben in a david-vs-goliath battle to fight the fossil fuel industry and change the terrifying math of the climate crisis. Kelly wrote, directed and produced SPLIT: A DEEPER DIVIDE – a non-partisan investigation of the US political divide hailed by Variety as a ‘solid, evenhanded spur for discussion’ and ‘a Must See’ by The Examiner – which was released theatrically nationwide and can currently be seen on the Documentary Channel. International broadcasts include Germany (ZDF), Japan (NHK), Austria (ORF), Spain (MultiCanal), Finland (YLE), Israel (Channel 8) and Taiwan (PTS). He is a partner at PF Pictures. At Schools and Conference. At Schools-Conference May 10, 2010 - 06:17 “Pritchard is a kind and funny man who wants to prevent the unaddressed grief of children from turning to anger, rage and violence as they grow older.” 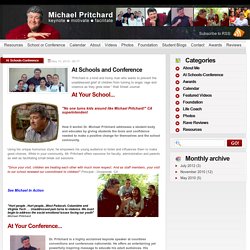 Wall Street Journal "No one turns kids around like Michael Pritchard! " CA superintendent How it works! Using his unique humorous style, he empowers his young audience to listen and influences them to make good choices. "Since your visit, children are treating each other with much more respect. See Michael In Action "Hurt people , Hurt people...West Paducah, Columbine and Virginia Tech . . . Dr. His audiences include business leaders, teachers, counselors, school administrators, health care workers, law enforcement groups, government employees and youth advocacy professionals. CLICK HERE - Sample Topics Conferance “Your conference set a new attendance record and our review tells us your keynote speech was a factor. 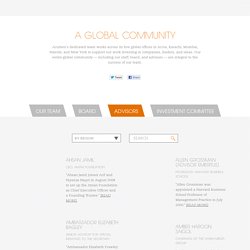 [READ MORE] Ambassador Elizabeth Frawley Bagley rejoined the U.S. Department of State as Special Representative to the Secretary of State for Global Partnerships on June 1, 2009. On October 1, 2010 she assumed the position of Senior Advisor for Special Initiatives to the Secretary. Prior to her appointment Ambassador Bagley served as Vice Chair of the U.S. Ambassador Bagley served as Senior Advisor to Secretary of State Madeleine Albright from 1997 – 2001, where she established and headed the Office of Media Programming Acquisition for the newly independent Balkan states.

She is a member of the Board of Directors of the National Democratic Institute for International Affairs, the American Ireland Fund, the French American Foundation, the National Park Foundation, the Atlantic Council, the Foreign Affairs Museum Council and the International Center for Missing and Exploited Children. Stephen Ritz. Cristián Samper. Julie Larsen Maher ©WCS Dr. 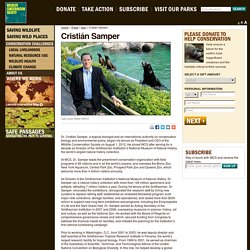 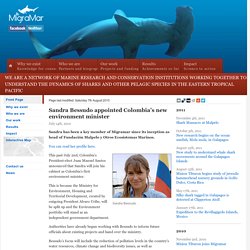 You can read her profile here. Sandra Bessudo This past July 2nd, Colombia’s President-elect Juan Manuel Santos announced that Sandra will join his cabinet as Colombia’s first environment minister. This is because the Ministry for Environment, Housing and Territorial Development, created by outgoing President Alvaro Uribe, will be split up and the Environment portfolio will stand as an independent government department. Authorities have already begun working with Bessudo to inform future officials about existing projects and hand over the ministry. Bessudo’s focus will include the reduction of pollution levels in the country’s water resources, climate change and biodiversity issues, as well as environment-related agreements signed by Colombia.