T. S. Eliot on Idea Incubation, Inhibition, and the Mystical Quality of Creativity + a Rare Recording 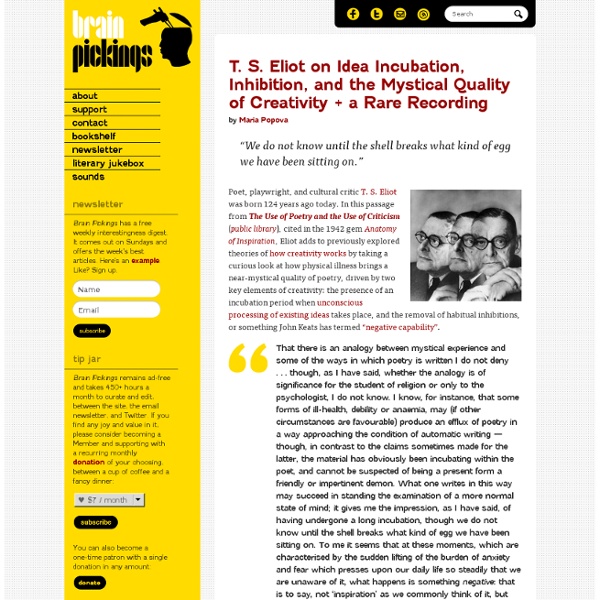 Related:  Creativity and Courage, Failure • Advice from the Experts • Articoli

Isaac Asimov on Curiosity, Taking Risk, and the Value of Space Exploration in Muppet Magazine by Maria Popova “To make discoveries, you have to be curious about why the universe is the way it is.” In the summer of 1983, Muppet Magazine invited science fiction icon Isaac Asimov — sage of science, champion of creativity in education, visionary of the future, lover of libraries — to “a meeting of the minds,” wherein Dr. Julius Strangepork would interview Asimov. Despite the silly tone of German-inspired Strangepork-speak, the wide-ranging conversation touches on a number of timeless and surprisingly timely issues. Pixar Cofounder Ed Catmull on Failure and Why Fostering a Fearless Culture Is the Key to Groundbreaking Creative Work by Maria Popova Why the greatest enemy of creative success is the attempt to fortify against failure. “Make New Mistakes.

Kierkegaard on Anxiety & Creativity by Maria Popova “Because it is possible to create — creating one’s self, willing to be one’s self… — one has anxiety. One would have no anxiety if there were no possibility whatever.” “Anxiety is love’s greatest killer,” Anaïs Nin famously wrote. But what, exactly, is anxiety, that pervasive affliction the nature of which remains as drowning yet as elusive as the substance of a shadow? In his 1844 treatise The Concept of Anxiety (public library), Danish philosopher Søren Kierkegaard (1813–1855) explains anxiety as the dizzying effect of freedom, of paralyzing possibility, of the boundlessness of one’s own existence — a kind existential paradox of choice.

Creativity is rejected: Teachers and bosses don’t value out-of-the-box thinking. Illustration by Rob Donnelly In the United States we are raised to appreciate the accomplishments of inventors and thinkers—creative people whose ideas have transformed our world. We celebrate the famously imaginative, the greatest artists and innovators from Van Gogh to Steve Jobs. Viewing the world creatively is supposed to be an asset, even a virtue.

Fixed vs. Growth: The Two Basic Mindsets That Shape Our Lives By Maria Popova “If you imagine less, less will be what you undoubtedly deserve,” Debbie Millman counseled in one of the best commencement speeches ever given, urging: “Do what you love, and don’t stop until you get what you love. Work as hard as you can, imagine immensities…” Far from Pollyanna platitude, this advice actually reflects what modern psychology knows about how belief systems about our own abilities and potential fuel our behavior and predict our success. Much of that understanding stems from the work of Stanford psychologist Carol Dweck, synthesized in her remarkably insightful Mindset: The New Psychology of Success (public library) — an inquiry into the power of our beliefs, both conscious and unconscious, and how changing even the simplest of them can have profound impact on nearly every aspect of our lives.

Being vs. becoming, Wendell Berry on solitude and our creative demons, the best biographies, memoirs, and history books of the year, and more Hey Peggy Fleming! If you missed last week's edition – the best art, design, and photography books of the year, how Rilke can help us befriend our mortality and live more fully, a tender wordless story about how we ennoble each other in friendship, and more – you can catch up right here. And if you're enjoying this, please consider supporting with a modest donation – every little bit helps, and comes hugely appreciated. Wendell Berry on Solitude and Why Pride and Despair Are the Two Great Enemies of Creative Work

Ray Bradbury on Writing, Emotion vs. Intelligence, and the Core of Creativity by Maria Popova “You can only go with loves in this life.” Between 1973 and 1974, journalist James Day hosted the short-lived but wonderful public television interview series Day at Night. Creativity, the Gift of Failure, and the Crucial Difference Between Success and Mastery by Maria Popova The lost art of learning to stand “where we would rather not and expand in ways we never knew we could.” “You gotta be willing to fail… if you’re afraid of failing, you won’t get very far,” Steve Jobs cautioned. “There is no such thing as failure — failure is just life trying to move us in another direction,” Oprah counseled new Harvard graduates. In his wonderfully heartening letter of fatherly advice, F.