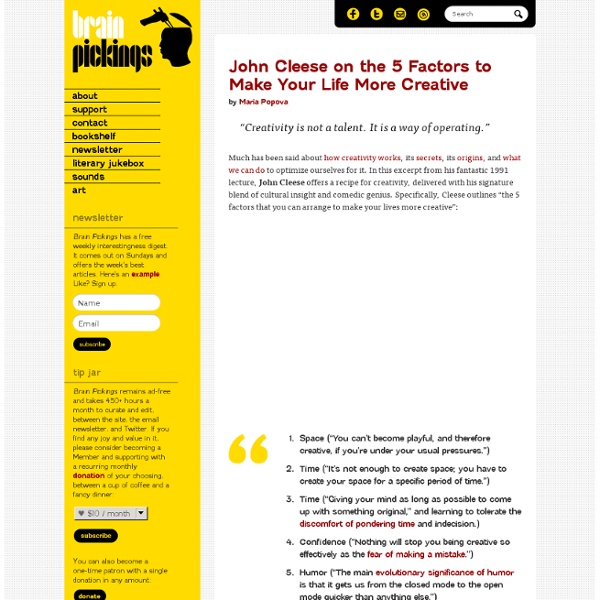 by Maria Popova “Creativity is not a talent. It is a way of operating.” Much has been said about how creativity works, its secrets, its origins, and what we can do to optimize ourselves for it. In this excerpt from his fantastic 1991 lecture, John Cleese offers a recipe for creativity, delivered with his signature blend of cultural insight and comedic genius. Specifically, Cleese outlines “the 5 factors that you can arrange to make your lives more creative”: The lecture is worth a watch in its entirety, below, if only to get a full grasp of Cleese’s model for creativity as the interplay of two modes of operating — open, where we take a wide-angle, abstract view of the problem and allow the mind to ponder possible solutions, and closed, where we zoom in on implementing a specific solution with narrow precision. A few more quotable nuggets of insight excerpted below the video. Creativity is not a talent. We need to be in the open mode when pondering a problem — but! Thanks, Simon

David Ogilvy’s Timeless Principles of Creative Management by Maria Popova “If you ever find a man who is better than you are — hire him. If necessary, pay him more than you pay yourself.” Advertising legend David Ogilvy endures not only as the original Mad Man, but also as one of modern history’s most celebrated creative leaders in the communication arts. From The Unpublished David Ogilvy (public library) — the same compendium of his lectures, memos, and lists that also gave us Ogilvy’s 10 no-bullshit tips on writing, his endearing memo of praise to a veteran copywriter, and his list of the 10 qualities of creative leaders — comes a chapter titled “Principles of Management,” based on a 1968 paper Ogilvy wrote as a guide for Ogilvy & Mather managers worldwide. In a section on morale, he admonishes that some companies “have been destroyed by internal politics” and offers seven ways to curtail them:

Hackschooling Jason, what's with the John Lennon quote? It's a great quote, but unless someone has explicitly told you otherwise, it has nothing to do with Logan any more than it has to do with your story above; which might be fine less the need to somehow single out your obsession with John Lennon (who's great but your making big reaches; not a good sign). It's not really necessary to try and make a great link in the specific way you have, between a good historical quote and some necessity by Logan to somehow tell the audience; "Hey, everything I've done is from John Lennon." The Creators Of "Workaholics" On Keeping The Stupid And Weird In Your Creative Process Often a comedian’s only barometer is his own funny bone. If you work as part of a comedy team, there’s more potential laugh fodder, but at the same time, more opportunity for diverging opinions to shut down potentially good ideas. That’s why the creators of Workaholics adhere to the code: let no stupid idea go unexplored. Meet the creators of Workaholics: Blake Anderson, Adam DeVine, and Anders Holm. All three also star in, write, and executive produce the show, which is now wrapping up its third season on Comedy Central.

PHP & MySQL Web Development for Beginners — an online course at Learnable Under the expert guidance of SitePoint’s own Kevin Yank, you’ll find the combination of digestible audio, video and mini-articles with a supportive forum of classmates to be so much fun, you won’t even realise how much you’ve learned by the time you’re done. “I am a couple of days away from finishing your PHP course which is brilliant. I had never done any website stuff ever before and just did it out of curiosity.

The Importance of Frustration in the Creative Process, Animated by Maria Popova “Before we can find the answer — before we can even know the question — we must be immersed in disappointment.” Last week, Jonah Lehrer took us inside “the seething cauldron of ideas” with Imagine: How Creativity Works, his long-awaited (by me, at least) new book. Now, from Flash Rosenberg — Guggenheim Fellow, NYPL artist-in-residence, live-illustrator extraordinaire, and Brain Pickings darling — comes this wonderful hand-drawn teaser for the book, distilling one of Lehrer’s key ideas in Rosenberg’s signature style of simple yet visually eloquent line drawings.

The Long Game: Brilliant Visual Essays on the Only Secret to Creative Success, from Leonardo da Vinci to Marie Curie by Maria Popova Why showing up day in and day out without fail is the surest way to achieve lasting success. “Expect anything worthwhile to take a long time,” a wise woman once said — a seemingly simple observation that is among the 7 most important things I’ve learned in the many years of doing what I do. This notion of doggedness is something countless admired creators have advocated — from Anthony Trollope’s advice to aspiring writers to Tchaikovsky’s admonition about work ethic — and it’s even something scientists have confirmed, in finding that “grit” is a greater predictor of success than intelligence. And yet, as a culture that worships at the altar of immediacy and instant gratification, we continue to romanticize the largely mythic notion of the overnight success, overlooking the years of struggle and failure that paved the way for some of humanity’s most admired and accomplished luminaries.

10 Tips for Highly Sensitive People When I completed Elaine Aron’s Highly Sensitive Person Self-Test, I checked 24 statements. Out of 27. I checked everything from being bothered by bright lights and loud noises to getting startled easily to trying to avoid mistakes to not watching violent movies or TV shows. Maybe you can relate. While there are many differences among highly sensitive people (HSPs), we have one thing in common: HSPs have a sensitive nervous system that makes it harder to filter out stimuli and easier to get overwhelmed by our environment. For instance, the sound of sirens and other loud noises might reverberate like nails on a chalkboard through your head.

How We Measure the Universe, Animated donating = loving Brain Pickings remains ad-free and takes hundreds of hours a month to research and write, and thousands of dollars to sustain. If you find any joy and value in it, please consider becoming a Member and supporting with a recurring monthly donation of your choosing, between a cup of tea and a good dinner: (If you don't have a PayPal account, no need to sign up for one – you can just use any credit or debit card.) You can also become a one-time patron with a single donation in any amount: labors of love