One Race, Every Medalist Ever - Interactive Graphic 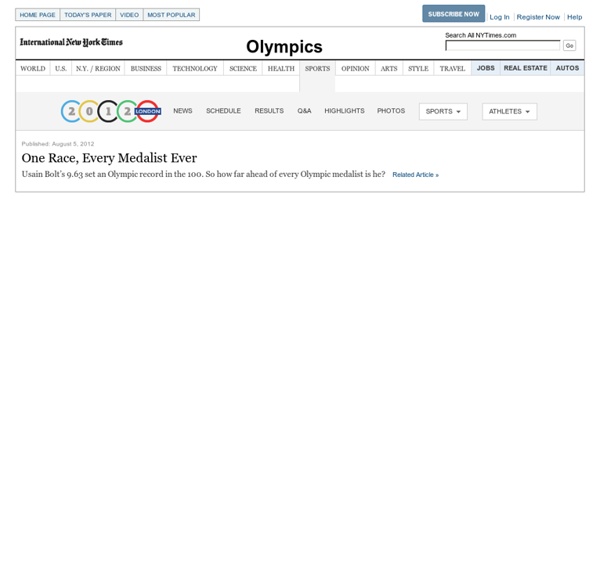 Sources: "The Complete Book of the Olympics" by David Wallechinsky and Jaime Loucky, International Olympic Committee; Amateur Athletic Assocation; Photographs: Chang W. Lee/The New York Times, Getty Images, International Olympic Committee By KEVIN QUEALY and GRAHAM ROBERTS Usain Bolt vs. 116 years of Olympic sprinters Based on the athletes’ average speeds, if every Olympic medalist raced each other, Usain Bolt (the London version) would win, with a wide distribution of Olympians behind him. Below, where each sprinter would be when Bolt finishes his race.

Studying the Brain Can Help Us Understand Our Unscientific Beliefs Editors’ Note: Portions of this post appeared in similar form in a December, 2009, piece by Jonah Lehrer for Wired magazine. We regret the duplication of material. Last week, Gallup announced the results of their latest survey on Americans and evolution. The numbers were a stark blow to high-school science teachers everywhere: forty-six per cent of adults said they believed that “God created humans in their present form within the last 10,000 years.”

Design Better Data Tables – Mission Log – Medium Design Better Data Tables Poor tables. Where did they go wrong? After being the bread and butter of the web for most of its early history, tables were cast aside by many designers for newer, trendier layouts. But while they might be making fewer appearances on the web these days, data tables still collect and organize much of the information we interact with on a day-to-day basis. For instance, there’s what I consider to be the mother of all tables: The United States’ “Harmonized Tariff Schedule,” a table that stretches over 3,550 pages and lists every single good that can be imported into the US, including such thrilling entries as “Men’s or boys’ overcoats, carcoats, capes, cloaks, anoraks (including ski-jackets), windbreakers and similar articles (including padded, sleeveless jackets).”

What is science? (according to Google) When I told family members that I was starting a new science blog for the Guardian, their first question was "what's it going to be about?" Actually, their first question was usually "what's a blog?" whereas a few asked "What's 'the Guardian'?" But after I explained all that, they'd ask what it was going to be about. Obviously as this blog is an attempt to derive humour from science and is hosted in the Science Blogs section, it's about science. But as this is a public medium, it raises the question: what do most people think science actually is?

Data visualisation: what’s next? – Signal Noise – Medium The trends of data visualisation are forever shifting and changing as the data climate evolves at an ever faster pace. I’ve put together some thoughts on trends that I have identified in the last five or more years, where we are now and where, I believe, some of the focus is going. Meaning of data Let’s start with how we think about data and how it is processed, which is demonstrated very well by this data evolution flow: 12 Complex Concepts Made Easier Through Great Data Visualization — ReadThink (by HubSpot) 12 Complex Concepts Made Easier Through Great Data Visualization Perhaps today was a rough day. Maybe you woke up late. You missed your workout, then your bus, then closing elevator doors at work. Maybe that project of yours is getting you down and if one more person tells you tomorrow is another day you’re going to scream.

Visualizations That Really Work Not long ago, the ability to create smart data visualizations, or dataviz, was a nice-to-have skill. For the most part, it benefited design- and data-minded managers who made a deliberate decision to invest in acquiring it. That’s changed. Yours, Insincerely - by Etgar Keret - Tablet Magazine When I was a kid, I always thought that Hebrew Book Week was a legitimate holiday , something that fit comfortably amid Independence Day, Lag B’Omer, and Hanukkah. On this occasion, we didn’t sit around campfires, spin dreidels, or hit each other on the head with plastic hammers, and, unlike other holidays, it doesn’t commemorate a historical victory or heroic defeat, which made me like it even more. At the beginning of every June, my sister, brother, and I would walk with our parents to the central square in Ramat Gan where dozens of tables covered in books were set up. Each of us would choose five books.

Mathematics Made Visible This image, drawn by Greg Egan, shows a cardioid and its catacaustic. The cardioid is a heart-shaped curve traced by a point on the perimeter of a circle that is rolling around a fixed circle of the same radius. The catacaustic of a curve in the plane is the envelope of rays emitted from some… A 3-dimensional honeycomb is a way of filling 3d space with polyhedra. It’s the 3-dimensional analogue of a tiiling of the plane. However, not only can we have honeycombs in Euclidean space, we can also have them in hyperbolic space. Dear Data has been acquired by MoMA, but this isn’t what we are most excited about. It’s always thrilling to look back on your life and see how often it’s the smallest of interactions that completely change your life’s direction and set you on a new path. For us, it was a conversation over a beer, where, barely knowing each other, we nervously started dreaming of ways to collaborate. This small interaction was the impetus for a project that consumed the next two years of our lives as well as became the foundation for a working relationship that, while not without its struggles, has developed into a collaboration with unexpected longevity. We are two data visualization designers living on either side of the Atlantic (Giorgia in New York, and Stefanie in London) who live lives seemingly in parallel.

Lessons from the Renaissance of Data Storytelling – Media Decoded In 1854, London was in the grip of a deadly outbreak of cholera. The prevailing wisdom was that the source of the illness was the Big Smoke’s notoriously polluted air. However, a physician named John Snow suspected contaminated water was to blame. To test his theory, he gathered data on all the cholera cases in London and plotted them on a map.