Scott Belsky on How to Avoid Idea Plateaus 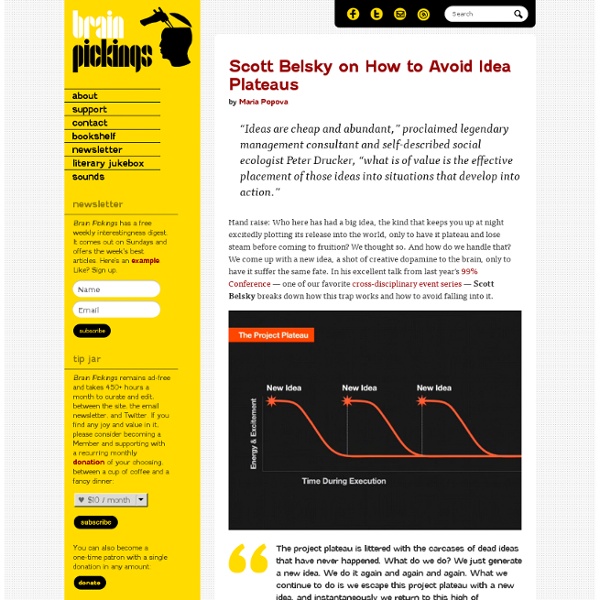 by Maria Popova “Ideas are cheap and abundant,” proclaimed legendary management consultant and self-described social ecologist Peter Drucker, “what is of value is the effective placement of those ideas into situations that develop into action.” Hand raise: Who here has had a big idea, the kind that keeps you up at night excitedly plotting its release into the world, only to have it plateau and lose steam before coming to fruition? We thought so. And how do we handle that? We come up with a new idea, a shot of creative dopamine to the brain, only to have it suffer the same fate. The project plateau is littered with the carcases of dead ideas that have never happened. If you haven’t yet read Scott’s book, Making Ideas Happen, we strongly encourage you to do so. Donating = Loving Bringing you (ad-free) Brain Pickings takes hundreds of hours each month. You can also become a one-time patron with a single donation in any amount: Brain Pickings has a free weekly newsletter. Share on Tumblr

Jonah Lehrer Resigns From New Yorker Amid Scandal It’s been a rough couple of months for the science Wunderkind. Jonah Lehrer resigned today from his post at the New Yorker after acknowledging that he fabricated quotes in his most recent book, Imagine. His publisher is pulling the e-book that contains the misquotations and is halting production of physical copies. Grapefruit: Yoko Ono's Poems, Drawings, and Instructions for Life by Maria Popova “A dream you dream alone may be a dream, but a dream two people dream together is a reality.” In 1964, more than a decade after the publication of her tender story An Invisible Flower, Yoko Ono collected a selection of her poetic meditations on life in a small but whimsical book published in Tokyo in a limited edition of 500. More than thirty years later, Grapefruit: A Book of Instructions and Drawings by Yoko Ono (public library) — part irreverent activity book for grown-ups, part subversive philosophy for life — was republished, with a new introduction by Ono herself.

Jonah Lehrer Wasn’t the Only Journalist Shaping His Conclusions Finally and fatally, what ties the narrative together is not some real insight into the nature of Dylan’s art, but a self-help lesson: Take a break to recharge. To anyone versed in Dylan, this story was almost unrecognizable. Lehrer’s intellectual chutzpah was startling: His conclusions didn’t shed new light on the facts; they distorted or invented facts, with the sole purpose of coating an unrelated and essentially useless lesson with the thinnest veneer of plausibility. It’s the same way with the science that “proves” the lesson. Malcolm Cowley on the Four Stages of Writing: Lessons from the First Five Years of The Paris Review by Maria Popova “The germ of a story is a new and simple element introduced into an existing situation or mood.” The kind of literary voyeurism that concerns itself with why great writers write and how, exactly, they go about it has long held especial mesmerism to aspiring authors and voracious readers alike. In 1953, a trio of literary enthusiasts founded The Paris Review. Spearheaded by George Plimpton, who edited the magazine from its founding to his death in 2003, it forever changed the face of literary journalism with its singular brand of incredibly in-depth, borderline existential conversations with beloved authors on the art and craft of writing. Five years later, they published the finest of those interviews — featuring such literary luminaries as William Faulkner, Dorothy Parker, and James Thurber — in Writers at Work: The Paris Review Interviews, First Series (public library).

Crush the "I'm Not Creative" Barrier - Jeff Dyer, Hal Gregersen, and Clayton M. Christensen by Jeff Dyer, Hal Gregersen, and Clayton M. Christensen | 10:50 AM May 7, 2012 Did you know that if you think you are creative, you’re more likely to actually be creative? This surprising fact pops up again and again in our research. In our database of over 6,000 professionals who have taken the Innovator’s DNA self & 360 assessments, people (entrepreneurs and managers alike) who “agree” with the survey statement “I am creative” consistently deliver disruptive solutions — by creating new businesses, products, services, and processes that no one has done before.

Virginia Woolf on the Language of Film and the Evils of Cinematic Adaptations of Literature by Maria Popova “The eye licks it all up instantaneously, and the brain, agreeably titillated, settles down to watch things happening without bestirring itself to think.” “Cinema, to be creative, must do more than record,” Anaïs Nin wrote in 1946 in the forth volume of her diaries. But the question of what this elusive, quintessential creative duty of cinema might be long predates Nin’s observation.

Jonah Lehrer on How Creativity Works by Maria Popova Inside the ‘seething cauldron of ideas,’ or what Bob Dylan has to do with the value of the synthesizer mind. In his 1878 book, Human, All Too Human: A Book for Free Spirits, Nietzsche observed: Artists have a vested interest in our believing in the flash of revelation, the so-called inspiration… shining down from heavens as a ray of grace. In reality, the imagination of the good artist or thinker produces continuously good, mediocre or bad things, but his judgment, trained and sharpened to a fine point, rejects, selects, connects… All great artists and thinkers are great workers, indefatigable not only in inventing, but also in rejecting, sifting, transforming, ordering.”

Arthur C. Clarke Predicts the Future in 1964, Gets It Oddly Right by Maria Popova How to walk the line between futurism and absurdity, or why the satellite is more important than the A-bomb. Earlier this week, we explored 5 vintage visions for the future of technology. In this fantastic clip from a 1964 BBC Horizon program — the same series that to this day explores such illuminating topics as the nature of reality, the age-old tension between science and religion, how music works, and what time really is — legendary science fiction writer, inventor, and futurist Arthur C. Clarke predicts the future. A half-century before most of today’s technologies, he presages the digital convergence with uncanny accuracy and reminds us, with eloquence and lucidity foreign to most of today’s quasi-futurists, of the very essence and purpose of predicting the future in the first place.

Jonah Lehrer: The man with the big ideas A rising star of popular science, who has opened up the laboratory to the everyday reader, takes on the question of creativity ©Dylan Coulter When two men meet each other for the first time, there is nothing quite so easy as talking about sports to establish a comfortable rapport. So it is perhaps unsurprising that when I meet author Jonah Lehrer on an unseasonably warm Monday in March, the conversation quickly turns to American football. Just before we sit down in the downtown New York office of his publisher, the star quarterback Peyton Manning has signed with the Denver Broncos, spurning the San Francisco 49ers.