How to Break Through Your Creative Block: Strategies from 90 of Today’s Most Exciting Creators 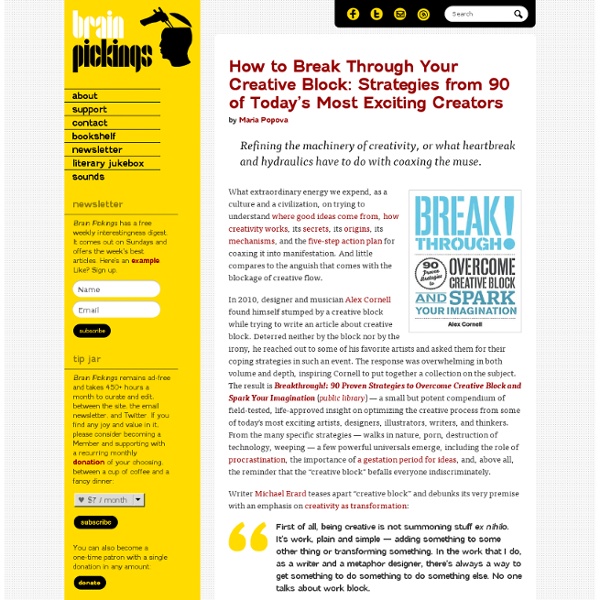 by Maria Popova Refining the machinery of creativity, or what heartbreak and hydraulics have to do with coaxing the muse. What extraordinary energy we expend, as a culture and a civilization, on trying to understand where good ideas come from, how creativity works, its secrets, its origins, its mechanisms, and the five-step action plan for coaxing it into manifestation. And little compares to the anguish that comes with the blockage of creative flow. In 2010, designer and musician Alex Cornell found himself stumped by a creative block while trying to write an article about creative block. Deterred neither by the block nor by the irony, he reached out to some of his favorite artists and asked them for their coping strategies in such an event. Writer Michael Erard teases apart “creative block” and debunks its very premise with an emphasis on creativity as transformation: First of all, being creative is not summoning stuff ex nihilo. Have your heart broken. Get enough sleep! Pretend. Cheers.

Do It: 20 Years of Famous Artists' Irreverent Instructions for Art Anyone Can Make by Maria Popova “Art is something that you encounter and you know it’s in a different kind of space from the rest of your life, but is directly connected to it.” One afternoon in 1993, legendary art critic, curator, and interviewer extraordinaire Hans Ulrich Obrist — mind of great wisdom on matters as diverse as the relationship between patterns and chance and the trouble with “curation” itself — sat down in Paris’s Café Select with fellow co-conspirers Christian Boltanski and Bertrand Lavier, and the do it project was born: A series of instructional procedures by some of the greatest figures in contemporary art, designed for anyone to follow as a sort of DIY toolkit for creating boundary-expanding art.

Anaïs Nin on Writing, the Future of the Novel, and How Keeping a Diary Enhances Creativity: Wisdom from a Rare 1947 Chapbook by Maria Popova “It is in the moments of emotional crisis that human beings reveal themselves most accurately.” In December of 1946, Anaïs Nin was invited to give a lecture on writing at Dartmouth, which received an overwhelming response. The following summer, after receiving countless requests, Nin adapted the talk in chapbook titled On Writing, which she printed at her own Gremor Press — the small publishing house Nin founded in 1942 out of disillusionment with mainstream publishing, which led her to teach herself letterpress and self-publish a handful of elegant manually typeset books with gorgeous engravings by her husband. On Writing, in which Nin considers the future of the novel and reflects on what keeping her famous diaries since the age of eleven taught her about writing, was published in a limited edition of 1,000 copies, 750 of which were for sale. Only a few are known to survive.

NeuroKnitting by Varvara Guljajeva , Mar Canet , and Sebastian Mealla Special thanx to Sytse Wierenga! We have plotted brainwave activity into a knitted pattern. 10 Rules for Creative Projects from Legendary Painter Richard Diebenkorn by Maria Popova “Do search. But in order to find other than what it searched for.” On a recent visit to the Richard Diebenkorn: The Berkeley Years, 1953-1966 exhibition at San Francisco’s De Young fine arts museum , I was taken with a small, simple sheet of paper handed to visitors, printed on which were the artists’ ten rules for beginning a painting — a sort of manifesto that applies in various degrees and various dimensions to just about every creative or intellectual endeavor, making a fine addition to these favorite manifestos for the creative life . Friend-of- Brain Pickings and frequent contributor Debbie Millman , who knows a thing or two about hand-lettered wisdom and typographic poetics , has kindly rendered Diebenkorn’s script here in her signature script — please enjoy: Complement this with Salvador Dalí’s creative credo .

100 Ideas That Changed Graphic Design by Maria Popova From visual puns to the grid, or what Edward Tufte has to do with the invention of the fine print. Design history books abound, but they tend to be organized by chronology and focused on concrete -isms. From publisher Laurence King, who brought us the epic Saul Bass monograph, and the prolific design writer Steven Heller with design critic Veronique Vienne comes 100 Ideas that Changed Graphic Design — a thoughtfully curated inventory of abstract concepts that defined and shaped the art and craft of graphic design, each illustrated with exemplary images and historical context.

How to Master Your Creative Routine and the Pace of Productivity by Maria Popova “When you work regularly, inspiration strikes regularly.” We seem to have a strange but all too human cultural fixation on the daily routines and daily rituals of famous creators, from Vonnegut to Burroughs to Darwin — as if a glimpse of their day-to-day would somehow magically infuse ours with equal potency, or replicating it would allow us to replicate their genius in turn. And though much of this is mere cultural voyeurism, there is something to be said for the value of a well-engineered daily routine to anchor the creative process. Manage Your Day-to-Day: Build Your Routine, Find Your Focus, and Sharpen Your Creative Mind (public library), edited by Behance’s 99U editor-in-chief Jocelyn Glei and featuring contributions from a twenty of today’s most celebrated thinkers and doers, delves into the secrets of this holy grail of creativity. It’s time to stop blaming our surroundings and start taking responsibility.

Not just a girl….. » Jaime Moore photography So my amazing daughter, Emma, turned 5 last month, and I had been searching everywhere for new-creative inspiration for her 5yr pictures. I noticed quite a pattern of so many young girls dressing up as beautiful Disney Princesses, no matter where I looked 95% of the “ideas” were the “How to’s” of how to dress your little girl like a Disney Princess. Now don’t get me wrong, I LOVE Disney Princesses, from their beautiful dresses, perfect hair, gorgeous voices and most with ideal love stories in the mix you can’t help but become entranced with the characters. But it got me thinking, they’re just characters, a writers tale of a princess (most before 1998)…an unrealistic fantasy for most girls (Yay Kate Middleton!).

John Cleese on the 5 Factors to Make Your Life More Creative by Maria Popova “Creativity is not a talent. It is a way of operating.” Much has been said about how creativity works, its secrets, its origins, and what we can do to optimize ourselves for it. In this excerpt from his fantastic 1991 lecture, John Cleese offers a recipe for creativity, delivered with his signature blend of cultural insight and comedic genius. Specifically, Cleese outlines “the 5 factors that you can arrange to make your lives more creative”:

15 Awesome Young Adult Book-Inspired Manicures Ever had the urge to paint your nails to match your favorite book? Check out these amazing nail art tributes to favorite young adult books. Becky at The Nail Art Hobby wears her The Fault in Our Stars pride. David Ogilvy’s Timeless Principles of Creative Management by Maria Popova “If you ever find a man who is better than you are — hire him. If necessary, pay him more than you pay yourself.” Advertising legend David Ogilvy endures not only as the original Mad Man, but also as one of modern history’s most celebrated creative leaders in the communication arts.

Teach like Batman Laura Thomas at Edcamp Keene asked one of my absolutely favorite questions of the whole thing during her Becoming Badass session (coming soon to a bookshelf near you!): Who are your fictional role models? What are the things they do that help you become a better teacher? The very first name that came to my mind was Batman. While I think Spider-Man’s morality (“With great power must come…great responsibility!”) The Long Game: Brilliant Visual Essays on the Only Secret to Creative Success, from Leonardo da Vinci to Marie Curie by Maria Popova Why showing up day in and day out without fail is the surest way to achieve lasting success. “Expect anything worthwhile to take a long time,” a wise woman once said — a seemingly simple observation that is among the 7 most important things I’ve learned in the many years of doing what I do.

‘Fallen Princesses’: The Amazing Photos of Depressed Disney Royalty The show has been around for almost 20 years, and it’s come back from the dead more than once. This time, though, it’s returning without its creator. After a four-year hiatus, Aaron McGruder’s The Boondocks is coming back to television without Aaron McGruder.