Crypto. Alien Implant Removals: Before and After Effects - MUFON. The Science of Consciousness and Extraordinary Experiences. Phil Schneider murdered for speaking out. (17) Pinterest. Planet Hunters. Aliens Tell Abductee When the World Will End. Watch: 'Time Traveler' Reveals Plant from the Future. Self-Healing Metals. When graduate student Guoqiang Xu and assistant professor of materials science and engineering Michael Demkowicz, SM ’04, PhD ’05, first saw the result, they thought it must be a mistake. 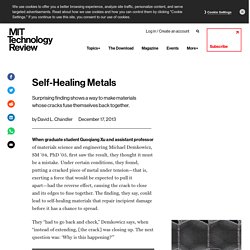 Under certain conditions, they found, putting a cracked piece of metal under tension—that is, exerting a force that would be expected to pull it apart—had the reverse effect, causing the crack to close and its edges to fuse together. The finding, they say, could lead to self-healing materials that repair incipient damage before it has a chance to spread. They “had to go back and check,” Demkowicz says, when “instead of extending, [the crack] was closing up.

EXTRAORDINARY BELIEFS. Square-Shaped UFO Photographed Near Charlotte. Alien Species Active in Earth Evolution – всё о пришельцах. Theancientaliens. Famous paintings depicting UFOs. The Beginning: UFO Encounters over Washington D.C. - Open Minds Magazine. The Battle of Los Angeles - The TRUE STORY of the 1942 UFO battle over Los Angeles CA. Ancient Sanskrit writings: UFO's vsited our planet 6.000 years ago. Did you know that Ancient India has one of the most extensive histories in the world? 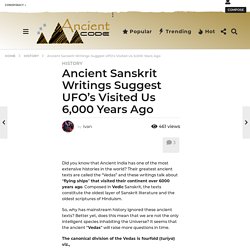 Their greatest ancient texts are called the “Vedas” and these writings talk about “flying ships” that visited their continent over 6000 years ago. Composed in Vedic Sanskrit, the texts constitute the oldest layer of Sanskrit literature and the oldest scriptures of Hinduism. So, why has mainstream history ignored these ancient texts? Unsolved UFO case in Houston bewilders former police officer. The Mutual UFO Network in Houston reports about 80 suspected UFO sightings a year. 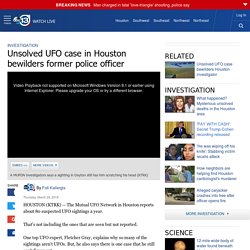 That's not including the ones that are seen but not reported. One top UFO expert, Fletcher Gray, explains why so many of the sightings aren't UFOs. But, he also says there is one case that he still can't figure out. Just above the Katy area an orange light is spotted, seen floating around. Down below, sightseers are convinced it's a UFO. Gray went back to Katy with Eyewitness News to investigate. "It's flickering as it moves through the night sky," Gray says. He says if it was a true UFO, the light would not be flickering. "It's probably going to be some type of aircraft or a lantern," he says. PHOTOS: UFO sightings in TexasIf you're viewing on our ABC13 news app, tap on the photo above to see more images. WHY IS THE KATY FREEWAY ATTRACTING UFOs? Gray shows us another reported sighting, this photo taken from a building in downtown Houston. Is that light a UFO or something else? The Black Vault. 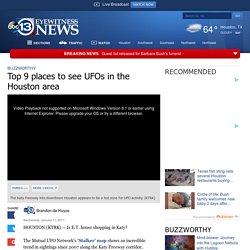 The Mutual UFO Network's 'Stalker' map shows an incredible trend in sightings since 2007 along the Katy Freeway corridor, heading east into downtown Houston. See the top nine places to see a UFO in Houston below... PHOTOS: UFO sightings in Texas. TexasUFOs - Latest UFO Sightings and News in the World. The Alien Intervention in the World Today - Begin to Explore the New Message. An [Alien] Intervention is what is happening. 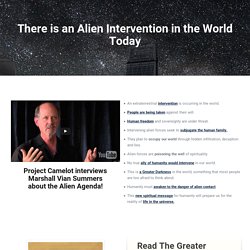 It is a reality of life. If you can face it, then love will become stronger. If you deny it, then fear will become stronger. God can only speak to that part of you that is capable of real love. SETI Institute. NASA Office of Planetary Protection. Alien Earths: why life on other worlds would be far weirder than us - The Verge. Last month, the American Astronomical Society's 223rd meeting featured the announcement of a few breakthroughs: Using the Kepler space observatory, researchers had discovered a planet roughly the mass of Earth orbiting a star beyond our solar system, and with the Hubble telescope they had provided the first detailed look at the weather of a "super Earth" — a planet larger than ours but smaller than Neptune — in our galactic neighborhood. 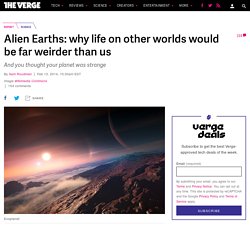 Astronomers found that GJ 1214b, like much of the Earth on any given day, is cloudy. These similarities to Earth are tantalizing. But despite them, these planets' respective solar systems look nothing like our own. Rather than circling a big, hot, yellow sun like ours, they spin around small, cool, red stars called red dwarfs. Ghost Adventures: Stardust Ranch. 7 new Earth-like exoplanets discovered, NASA announces. Talk about lucky number seven. 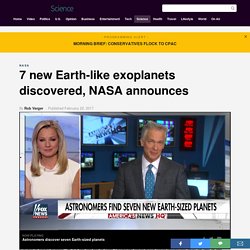 Astronomers have discovered not one, not two, but seven Earth-sized planets orbiting a star called TRAPPIST-1. What’s more, three of them are in the habitable zone— the happy place where liquid water can exist on the surface of rocky planets, as it’s not too hot or cold. (Although liquid water could potentially exist on any of the seven, NASA said, it likes the odds on those three best.) The space agency calls the discovery of the fascinating solar system record-breaking. Divine Cosmos. UFO SIGHTINGS DAILY. The 37th Parallel a UFO Highway? Opemmindstv explains, “Ex-Deputy Sherriff Chuck Zukoswki has spent 25 years investigating mysterious phenomena across America. 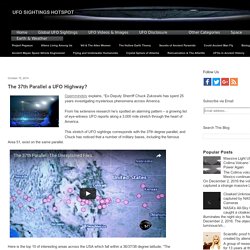