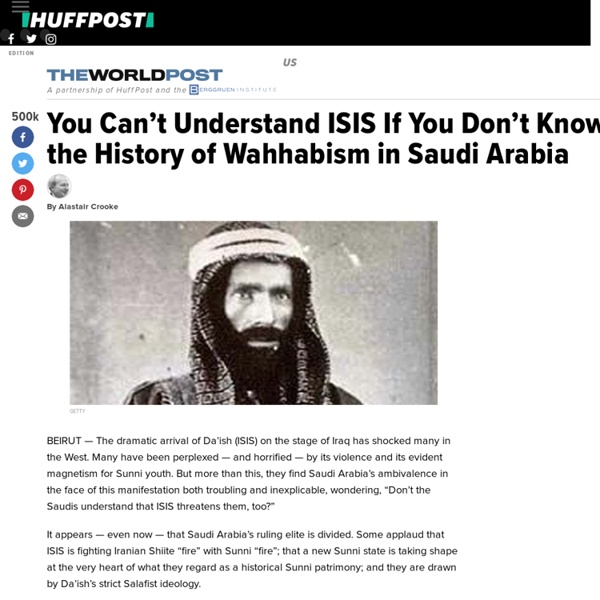 BEIRUT — The dramatic arrival of Da’ish (ISIS) on the stage of Iraq has shocked many in the West. Many have been perplexed — and horrified — by its violence and its evident magnetism for Sunni youth. But more than this, they find Saudi Arabia’s ambivalence in the face of this manifestation both troubling and inexplicable, wondering, “Don’t the Saudis understand that ISIS threatens them, too?” It appears — even now — that Saudi Arabia’s ruling elite is divided. Some applaud that ISIS is fighting Iranian Shiite “fire” with Sunni “fire”; that a new Sunni state is taking shape at the very heart of what they regard as a historical Sunni patrimony; and they are drawn by Da’ish’s strict Salafist ideology. Many Saudis are deeply disturbed by the radical doctrines of Da’ish (ISIS) — and are beginning to question some aspects of Saudi Arabia’s direction and discourse. But this “cultural revolution” was no docile reformism. All this behavior, Abd al-Wahhab denounced as bida — forbidden by God.

Sudanese woman sentenced to die for Christianity gives birth in prison Meriam Yehya Ibrahim, 27, gave birth in prison MondaySources: Her husband was not allowed to attend the birthIbrahim was convicted of apostasy (CNN) -- A Sudanese woman sentenced to die for refusing to renounce her Christianity has given birth to a girl in prison, her lawyers said Tuesday. Meriam Yehya Ibrahim, 27, delivered her baby Monday at a women's prison in Khartoum, but her husband was not allowed to be present for the birth, sources told CNN. They asked not to be named for safety reasons. Mindless terrorists? The truth about Isis is much worse It’s “the first of the storm”, says Islamic State. And little wonder. For the chaotic scenes on the streets of Paris and the fearful reaction those attacks provoked are precisely what Isis planned and prayed for. The greater the reaction against Muslims in Europe and the deeper the west becomes involved in military action in the Middle East, the happier Isis leaders will be. Because this is about the organisation’s key strategy: finding, creating and managing chaos.

Idiot Free Zone - Idiot Free Zone The bloodletting suffered by France this year is horrendous and inhumane. The perpetrators should meet full judgment for their heinous acts. France, just as other great European colonial powers and the United States, is finding that it cannot escape its history:

fake-news-claims-conservatives-mainstream-media- In defining “fake news” so broadly and seeking to dilute its meaning, they are capitalizing on the declining credibility of all purveyors of information, one product of the country’s increasing political polarization. And conservatives, seeing an opening to undermine the mainstream media, a longtime foe, are more than happy to dig the hole deeper. “Over the years, we’ve effectively brainwashed the core of our audience to distrust anything that they disagree with. And now it’s gone too far,” said John Ziegler, a conservative radio host, who has been critical of what he sees as excessive partisanship by pundits. “Because the gatekeepers have lost all credibility in the minds of consumers, I don’t see how you reverse it.”

Taliban storms Pakistan school, killing scores of children Video Keywords army wives claimed responsibility More than 100 people were killed, mostly children, by Taliban gunmen in an attack on a military school in Peshawar, Pakistan. VPC Video Transcript Historian Demolishes Idea The Quran Is More Violent Than Bible: Christians Have ‘Holy Amnesia’ « To hear Fox News tell it, the Muslim faith – and therefore the 1.5 billion people who practice it – are inherently unable to integrate and live within Western society. Republican presidential candidate Ben Carson argued that point explicitly, adding that Islam is so at-odds with American values that a Muslim couldn’t be trusted to be president. Inevitably, those who make these claims do so by painting the religion of Islam with a very wide brush. They assume all Muslims are terrorists.

What I Discovered From Interviewing Imprisoned ISIS Fighters No sooner am I settled in an interviewing room in the police station of Kirkuk, Iraq, than the first prisoner I am there to see is brought in, flanked by two policemen and in handcuffs. I awkwardly rise, unsure of the etiquette involved in interviewing an ISIS fighter who is facing the death penalty. He is small, much smaller than I, on first appearances just a boy in trouble with the police, his eyes fixed on the floor, his face a mask.

Why People Enthusiastically Vote for Counterproductive Policies - The Atlantic Governing is often a cause-and-effect business. Give workers a tax break on retirement accounts? More people save for life after the working world. Offer a rebate for old cars?

Raising Questions Within Islam After France Shooting Photo CAIRO — Islamist extremists behead Western journalists in Syria, massacre thousands of Iraqis, murder 132 Pakistani schoolchildren, kill a Canadian soldier and take hostage cafe patrons in Australia. Now, two gunmen have massacred a dozen people in the office of a Paris newspaper. The rash of horrific attacks in the name of Islam is spurring an anguished debate among Muslims here in the heart of the Islamic world about why their religion appears cited so often as a cause for violence and bloodshed. The majority of scholars and the faithful say Islam is no more inherently violent than other religions. But some Muslims — most notably the president of Egypt — argue that the contemporary understanding of their religion is infected with justifications for violence, requiring the government and its official clerics to correct the teaching of Islam.

How the Shia-Sunni split in 632AD led to Iran and Saudi Arabia’s power games today I’ve been asked by a bunch of people today to comment on this essay “Economic Inequality,” penned by self-described “essayist” Paul Graham, who is also the subject of a poem I recently wrote titled, “Paul Graham is Asking to be Eaten.” When my friend Danilo asked me to respond to this, I said that the essay was too vapid and lacking in substance to critique. I can distill the essence of the entire argument to: “Don’t hate the player, but don’t hate the game either. Hate yourselves, stupid poors, for not getting VC funding to start a company.” Danilo then offered to pay me $500. And I said that I would think about it.

How ISIS Picks Its Suicide Bombers They come from Russia, France—even New Jersey—to end their lives for an ‘Islamic State.’ But an ISIS defector reveals that Saddam’s old spies are the ones holding all the triggers. For all the attention paid to ISIS, relatively little is known about its inner workings. untitled Donald Trump will begin his presidency in January with control over both chambers of Congress by his party. However, as The Guardian reports, although “this one-party control over Washington hands Trump enviable power” he should not expect “plain sailing” as the Democrats are expected to fight back using the Senate filibuster. “We are going to see the use of the filibuster by Democrats to a degree that’s unprecedented,” said Ross Baker, professor of political science at Rutgers University. “Republicans didn’t offer Obama a honeymoon in 2009 and nor will the Democrats for Trump.” And it’s not just in Washington where Donald Trump can expect to find trouble moving forwards with his agenda. “Today, we woke up feeling like strangers in a foreign land, because yesterday Americans expressed their views on a pluralistic and democratic society that are clearly inconsistent with the values of the people of California,” they began.

ISIS is losing If you want to understand what's happening in the Middle East today, you need to appreciate one fundamental fact: ISIS is losing its war for the Middle East. This may seem hard to believe: in Iraq and Syria, the group still holds a stretch of territory larger than the United Kingdom, manned by a steady stream of foreign fighters. Fighters pledging themselves to ISIS recently executed 21 Christians in Libya. It's certainly true that ISIS remains a terrible and urgent threat to the Middle East.