Support for ISIS in the Muslim World - Perceptions vs Reality - Metrocosm 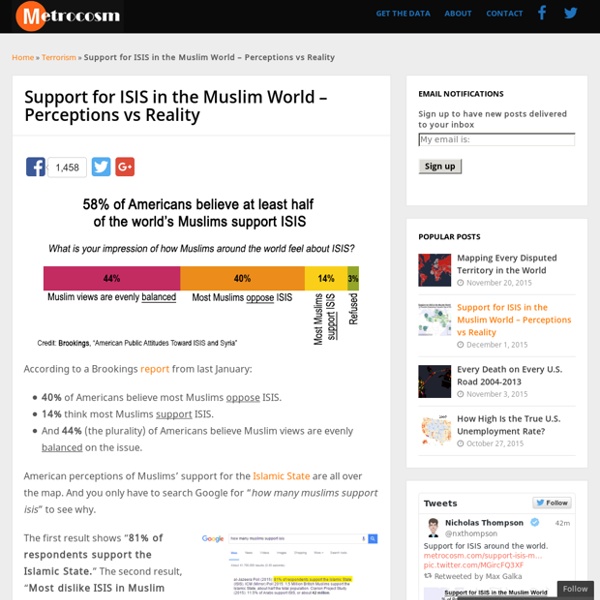 According to a Brookings report from last January: 40% of Americans believe most Muslims oppose ISIS.14% think most Muslims support ISIS.And 44% (the plurality) of Americans believe Muslim views are evenly balanced on the issue. American perceptions of Muslims’ support for the Islamic State are all over the map. And you only have to search Google for “how many muslims support isis” to see why. The first result shows “81% of respondents support the Islamic State.” The second result, “Most dislike ISIS in Muslim countries The range of answers to this question reported by the media is enormous, partly because much of it comes from online polls, social media sentiment analysis, and other non-scientific / unrepresentative studies. Last month, the International Business Times cited a study from Pew Research Center concluding ISIS is “almost universally hated.” What the Muslim world actually thinks of ISIS Looking only at scientific opinion polls, the results are actually very consistent. Sources

High School Drug Use Trends In 2014, 44.1 million Americans reported using illicit drugs over the past year. One tragic result of the widespread use of drugs and alcohol is its impact on youth. In the United States alone, 7% of youth aged 12–13 took an illicit substance in the past year, while 5.6% reported drinking alcohol. Saudi court sentences poet to death for renouncing Islam A Palestinian poet and leading member of Saudi Arabia’s nascent contemporary art scene has been sentenced to death for renouncing Islam. A Saudi court on Tuesday ordered the execution of Ashraf Fayadh, who has curated art shows in Jeddah and at the Venice Biennale. The poet, who said he did not have legal representation, was given 30 days to appeal against the ruling. Fayadh, 35, a key member of the British-Saudi art organisation Edge of Arabia, was originally sentenced to four years in prison and 800 lashes by the general court in Abha, a city in the south-west of the ultraconservative kingdom, in May 2014. But after his appeal was dismissed he was retried last month and a new panel of judges ruled that his repentance did not prevent his execution.

Trump's conflicts of interest: a visual guide Trump's conflicts of interest: a visual guide By Nadja Popovich and Jan Diehm “I will be leaving my great business in total in order to fully focus on running the country in order to MAKE AMERICA GREAT AGAIN!” Donald Trump tweeted on Wednesday. The early morning announcement, which provided no further details but promised a press conference on 15 December, followed weeks of bad press over conflicts of interest posed by the Trump Organization’s international real estate dealings. “While I am not mandated to do this under the law,” Trump wrote, “I feel it is visually important, as president, to in no way have a conflict of interest with my various businesses.”

There's Big Money to Be Made in Asteroid Mining See the full version of the infographic. If humans were ever able to get their hands on just one asteroid, it would be a game-changer. That’s because the value of many asteroids are measured in the quintillions of dollars, which makes the market for Earth’s annual production of raw metals – about $660 billion per year – look paltry in comparison. The reality is that the Earth’s crust is saddled with uneconomic materials, while certain types of asteroids are almost pure metal. X-type asteroids, for example, are thought to be the remnants of large asteroids that were pulverized in collisions in which their dense, metallic cores got separated from the mantle.

40 Maps That Will Help You Make Sense of the World - Entertainment, Science and Technology If you’re a visual learner like myself, then you know maps, charts and infographics can really help bring data and information to life. Maps can make a point resonate with readers and this collection aims to do just that. Hopefully some of these maps will surprise you and you’ll learn something new. A few are important to know, some interpret and display data in a beautiful or creative way, and a few may even make you chuckle or shake your head.See Also 10 Maps That You were not Taught in High Schools 1. Where Google Street View is Available

Iranian artist imprisoned for cartoon of local politicians Atena Farghadani is a 28-year-old Iranian artist. She was recently sentenced to 12 years and 9 months in prison for drawing a cartoon. This cartoon, that she posted on her Facebook page last year, depicts members of the Iranian parliament as animals. It was drawn in protest of new legislature in Iran that will restrict access to contraception and criminalise voluntary sterilisation.

Below you'll find a nifty infographic produced by the folks at Yellowbrick detailing the consequences of everyone's favorite irritating childrearing trend: helicopter parenting. We've written a lot about this topic here at Big Think; our archives are a veritable smorgasbord of pieces detailing its effects and consequences. Our focus isn't merely because we like to helicopter the helicopter parents, but because shifts in how we raise our kids have resulted in a generation of young adults who lack critical thinking, self-reliance, and coping skills. Shaking hands with your lawyer is not a crime, rules an Iranian judge By now, many of us have at least seen the trailer for The Revenant, with Leonardo DiCaprio cast as Hugh Glass, a fur trapper and hunter who embarks on a mission for vengeance after being left for dead by his cohorts in the wake of a bear attack. As it turns out, Hugh Glass was a real guy who had a pivotal role in the westward expansion of the fur trade, and by extension, America. And he was even more of a badass than we see in the movie—though not for the reasons you might expect.

About Bones You probably don’t give much thought to your skeleton, even though it’s holding you together. Do you have as many bones now as you did when you were born? What’s the shortest bone in your body? How the Shia-Sunni split in 632AD led to Iran and Saudi Arabia’s power games today I’ve been asked by a bunch of people today to comment on this essay “Economic Inequality,” penned by self-described “essayist” Paul Graham, who is also the subject of a poem I recently wrote titled, “Paul Graham is Asking to be Eaten.” When my friend Danilo asked me to respond to this, I said that the essay was too vapid and lacking in substance to critique. I can distill the essence of the entire argument to: “Don’t hate the player, but don’t hate the game either. Hate yourselves, stupid poors, for not getting VC funding to start a company.” Danilo then offered to pay me $500.

What is the World’s Biggest Cash Crop? — Information is Beautiful Yep Cannabis makes serious dough. Curious why so many US states – Washington, Oregon, Alaska, Colorado – have decriminalised or even legalized the drug? Because state legislators are getting high on another kind of green. How long before other cash-strapped governments around the world follow suit?